MONSTA X Talks About Their Rising Popularity In The U.S. + How BTS’ Success Affected Them

MONSTA X looked back at their successful world tour and overseas promotions on MBC’s “Section TV.”

On September 10, MONSTA X appeared on the weekly entertainment news show for an interview.

MONSTA X recently ended their second world tour “The Connect” where they played in front of thousands of fans in Korea, Europe, Asia, North America, and South America.

When asked about their appearance on U.S. talk show “Good Day New York,” MONSTA X explained, “We also appeared on many U.S. radio programs. They said that our fans requested our songs a lot, so they were played on air. We didn’t even know about it.”

About speaking in English during their tour, I.M said, “I lived in America for a little while and the agency put it to good use.” Minhyuk added, “When they ask us questions, I can understand the first and second questions as if it’s an English listening test, but it gets harder and harder.”

MONSTA X also described differences between some of their fans. I.M. said, “In the United States and Latin American countries, the fans are very passionate.” Jooheon added, “They dance along. We have a song called ‘Rush’ and when I do this move, the fans in front of us do it too.”

The group added how fans in Spain throw underwear on stage while their Japanese fans have cute fan chants. Wonho added, “Korean fans are like a mix of Japanese and North American fans.”

The reporter then brought up how it must be unavoidable for MONSTA X to be compared to BTS, who is currently enjoying massive popularity in the United States. Kihyun answered, “We were really thankful because BTS seniors made K-pop a big issue.”

Minhyuk added, “They made the title of ‘K-pop artist’ well-known, so it was easier for us.” They agreed with the reporter’s words that MONSTA X was able to receive more attention thanks to BTS rather than be compared to the group. 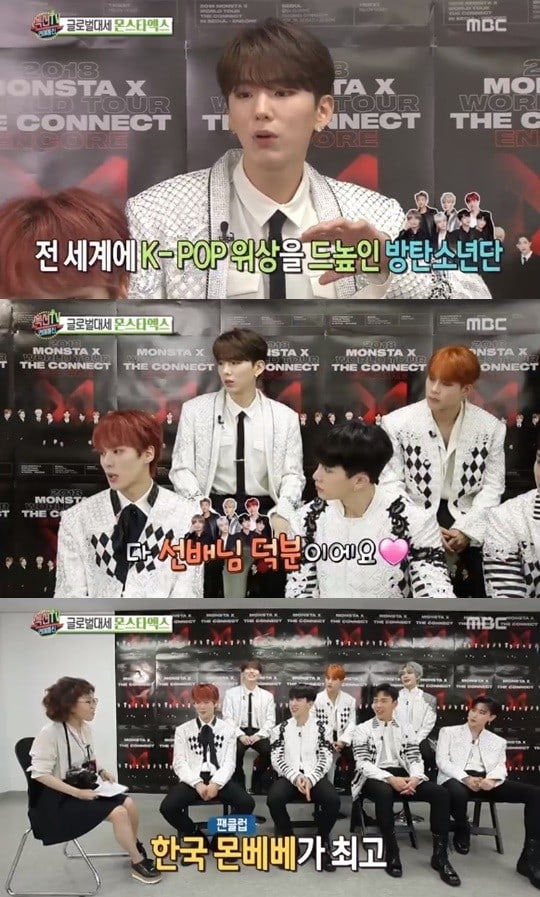 MONSTA X concluded their world tour with an encore concert in Seoul on August 25.

MONSTA X
BTS
Section TV
How does this article make you feel?