Starring EXO’s D.O. and Nam Ji Hyun, “100 Days My Prince” is a historical romance drama that tells the story of Crown Prince Lee Yool (played by D.O.), who temporarily becomes an amnesiac and ends up in an unconventional relationship with Yi Suh (played by Nam Ji Hyun), the oldest unmarried woman in the Joseon.

We’ve been blessed with only two episodes so far, but I have to say that the drama is as good as I’d hoped it to be!

A large chunk of the first episode is set during the childhood years of our main couple. As Lee Yool is from a noble family, he behaves with a sense of entitlement and a carefree attitude that comes with his young age and social standing. However, when Lee Yool meets the spunky and upstanding Yi Suh, he realizes he still has a lot to learn. After getting into some antics together, he cutely becomes enamored with her bravery, brains, and beauty, and abruptly professes his wish to marry her!

Unfortunately, Lee Yool’s father is plotting to overthrow the crown, under the direction of devious Minister Kim Cha Eun (Jo Sung Ha). And the way to the throne means killing all who stand in his way, which includes Yi Suh’s family. Luckily, Yi Suh’s father is able to fend off the attackers while she escapes with her brother, and Lee Yool, who hides in the shadows, ends up as a witness to all this bloodshed and violence. Talk about PTSD and all the future angst!

16 years later, Lee Yool has grown up into a broody and joyless Crown Prince who is married to Minister Kim’s daughter, Kim So Hye (Han So Hee). But it’s only on paper, as he refuses to consummate their marriage due to his strong dislike of her and her father. This becomes a major point of contention, especially since the country is facing a long drought, and the ministers believe that consummating the marriage will send good energy out and appease the gods. Lee Yool snorts at the ridiculous superstition, arguing that his energy alone wouldn’t be enough, and instead orders all unmarried men and women in their 20s to be married off within the month.

One of these unmarried women happens to be adult Yi Suh, who now goes by the name of Hong Shim. As it turns out, her brother has gone missing, and she is now living with her adoptive father. She also owns the title of being the oldest unmarried woman in Joseon at the terrifying age of….28. Hong Shim absolutely refuses to marry just because of the Crown Prince’s “dumb” orders. Instead, she makes up a story about being promised to a man from another village named Won Deuk, who happens to be serving in the military and won’t be returning anytime soon. Sadly, no one really buys into her story, especially since the officials need to enforce the royal orders or face retribution themselves. 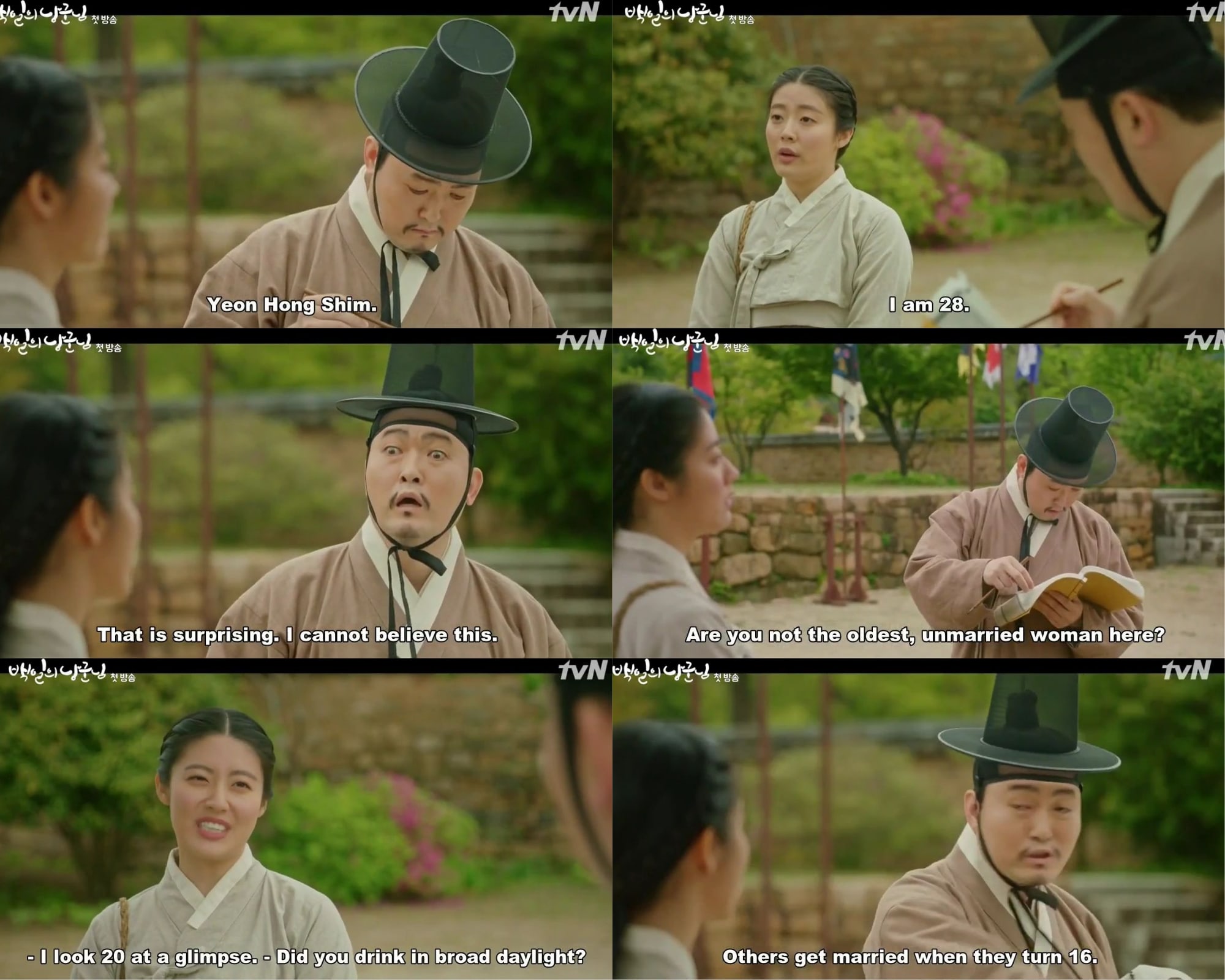 So when does the amnesia come into play? Well, after a series of events, Lee Yool becomes the target of an assassination attempt while on the way to the rain ceremony. Despite his attempts to escape, one of the well-trained attackers catches up with Lee Yool and shoots him with an arrow. Losing his balance, Lee Yool rolls down the hill and hits his head on a rock on the way down.

In a twist of fate, the Crown Prince is hilariously found unconscious at the bottom of the hill by Hong Shim’s father while he’s… pooping. When her father hears that the officials have Hong Shim and are flogging her for refusing marriage, he appears with Lee Yool in tow, claiming that Won Deuk has returned from the army.

Gasp! Is this father the first EXO-L in history?!

What a way to leave off at the end of the second episode! These first two episodes have certainly taken their time laying down the groundwork and giving us a broad view into this world. And that’s a good thing, especially with historical dramas, because there is usually so many characters involved that the longer introduction allows for more time to connect with them (much less actually recognize them). Seeing Lee Yool and Hong Shim during their childhood years also gives us the needed insight into their characters, allowing us to easily understand their adult selves and the baggage they carry.

And while this “meet when they are children” trope may feel overplayed, the child actors playing them are just so cute and precocious that their scenes really pop and make us excited to see the chemistry between their older counterparts.

It’s adorable how he’s so proud of it too!

As for the adult actors, I am pleased to say they are a well-cast bunch. I’ve always loved Kyung Soo in his past work and have no doubt he will be able to pull off both the brooding and burdened Lee Yool as well as the wide-eyed, hapless Won Deuk. Nam Ji Hyun also always does great with bright and strong characters, so this role is definitely one where she will shine.

But the one who really caught me by surprise is Han So Hee! Not only is she absolutely gorgeous, but you can tell she’s got the talent to boot. In a scene where she’s squaring off against Lee Yool, she’s able to switch from feeling cornered to suddenly having her claws out, all through some very nuanced facial expressions. I’m also excited for Kim Seon Ho (whom I throughly enjoyed in “Two Cops“) who plays Jung Je Yoon, a man who seems to have his own agenda. This is certainly one talented cast, and we haven’t even started talking about the veteran actors yet.

In terms of the storyline, we can easily expect some “forced cohabitation” shenanigans for the next few episodes, and I for one can’t wait for all the humor to kick in, especially since we know there will be angst on the horizon once Won Deuk gets his memory back. Plus, these first two episodes have also piqued our curiosity by giving us some hints of possible upcoming storylines, such as the disappearance of Hong Shim’s brother and whether or not Lee Yool’s mother is really dead.

All in all, the premiere was able to set a new ratings record for tvN for good reason — it boasts a strong cast, an intriguing storyline, beautiful cinematography, and is just all around enjoying to watch. I can’t wait to dive into this week’s new episodes!

How much are you enjoying this drama? And are you as bummed as me about the death of Dong Joo? Also, bath water incident – “LOL” or “Eeew”? Leave your comments below!

Belinda_C hopes they reach 10% in ratings asap, so she can watch D.O. teach the rest of the cast to dance! She’s also really enjoying Shinhwa’s latest “Kiss Me Like That”! Go have a listen asap!