“Where Stars Land” is a melodrama about a mysterious employee named Lee Soo Yeon (played by Lee Je Hoon) who has a secret and a first-year employee named Han Yeo Reum (played by Chae Soo Bin) who has a painful past and causes accidents wherever she goes. The two colleagues will try to heal each other’s wounds as they work together at Incheon International Airport.

Oh Dae Ki is the fastest one to run to the scene when a situation occurs and doesn’t let even the smallest incidents slide by. Na Young Joo is a former national judo athlete who is straightforward and cold, and is often misunderstood by others due to her conservative personality. The two characters will add “senior and junior” chemistry to the drama.

In the stills, Oh Dae Ki and Na Young Joo are looking charismatic in their uniforms. They look around the airport and try to find the solution for a passenger in trouble.

Kim Kyung Nam and Lee Soo Kyung focused on practicing for their action scenes even before filming began. They also kept their hair and makeup to a minimum in order to closely resemble their characters in real life.

Kim Kyung Nam, who previously appeared in “Prison Playbook” and “Come and Hug Me” described his character, saying, “Oh Dae Ki in ‘Where Stars Land’ is someone who has a strong sense of responsibility and duty for the safety of Incheon Airport, and a clear professional spirit. He has a simple masculine appearance to him, but I also want to express his inner aspects three-dimensionally.”

Lee Soo Kyung, who won Best Supporting Actress at this year’s Baeksang Arts Awards, said, “Na Young Joo is different from the characters I’ve attempted in the past, so I personally have high expectations for this role. I want to show sincere ‘girl crush’ charms while being perfectly responsible for the airport’s safety.” 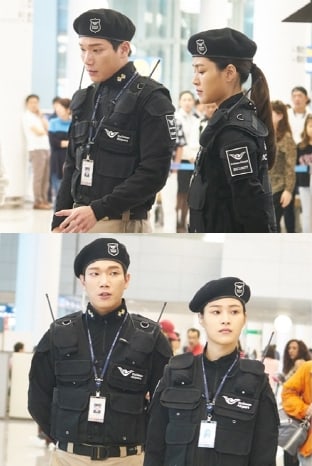 A source from the drama said, “Every time Kim Kyung Nam and Lee Soo Kyung appear at the airport in their uniforms, they make the filming crew flinch with how real they make the situation look. Please look forward to the two actors’ performance that will complete the final piece of the Incheon Airport ‘young blood’ puzzle along with Lee Soo Yeon and Han Yeo Reum of the passenger service team and Go Eun Seob [SF9’s Rowoon] of the airport mooring managing team.”

“Where Stars Land” premieres on October 1 at 10 p.m. KST and will be available on Viki!

Check out the trailer with English subtitles below:

Kim Kyung Nam
Where Stars Land
Lee Soo Kyung (1996)
How does this article make you feel?