Seo In Guk has opened up about his military enlistment controversy.

On September 28, a press conference was held for the new tvN drama “The Smile Has Left Your Eyes” at Amoris Hall in Seoul, with director Yoo Je Won and actors Seo In Guk, Jung So Min, Park Sung Woong, Seo Eun Soo, and Jang Young Nam in attendance.

“The Smile Has Left Your Eyes” is a mystery melodrama about a dangerous, free-spirited “monster” named Kim Moo Young (played by Seo In Guk) who is suspected of murder, a woman named Jin Kang (played by Jung So Min) who has the same emotional scars as he does, and her brother named Jin Kook (played by Park Sung Woong), a detective that faces off against Moo Young. The drama is based on the popular 2002 Japanese drama of the same name.

During the event, Seo In Guk addressed his controversy from 2017. As the actors introduced their characters and roles in the drama, Seo In Guk stood up from his seat to apologize directly for the incident.

He questioned, “May I stand up to say something?” and stated, “First, I want to thank the reporters for attending this press conference, and before we begin, I’d like to apologize for causing trouble until now. With a good image and good acting, I will take in the role of Kim Moo Young.”

He continued, “The character of Kim Moo Young holds an energy that would cause many people to consider him a monster. I think he’s an extremely dangerous character that plays around putting everything, including himself, on the line. Just as Jin Kang says, he’s a character that begins to find his own human quality, along with the warmth inside the side of himself that is not generalized, as the two begin to know each other in the same place.” 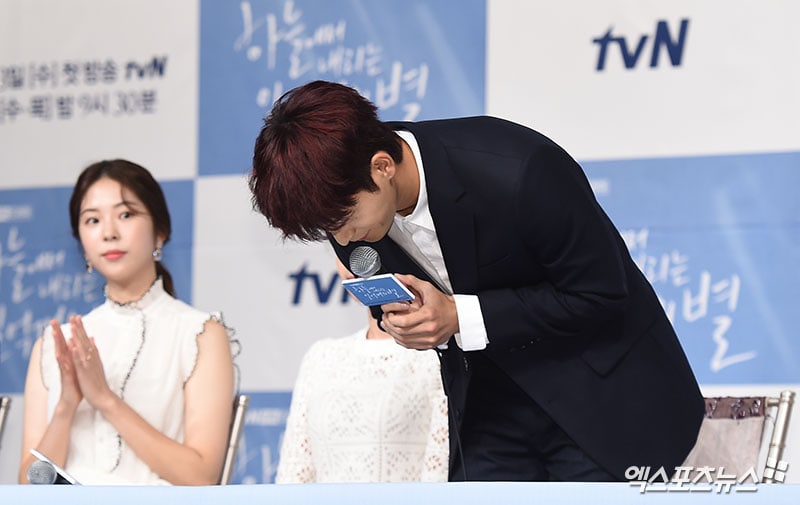 A year ago, a media outlet had reported that Seo In Guk knew of his medical condition (osteochondral lesions) — which is grounds for exemption from military service — well ahead of time, but enlisted anyway. The report suggested that despite knowing of the condition as early as March 2015, Seo In Guk did not take any treatment measures. He then enlisted in March 2017, but was promptly ordered to receive a re-examination. Ultimately, he was exempted from duty.

Jellyfish Entertainment then issued an official statement denying these reports and apologized for causing concern regarding his military service.

“The Smile Has Left Your Eyes” premieres on October 3, and will be available on Viki.

Seo In Guk
XPN
The Smile Has Left Your Eyes
How does this article make you feel?