Highlight’s Lee Gikwang blamed himself for the elimination of his teammates.

On the September 28 episode of “Dancing High,” there were ace unit battles with eliminations at stake. Lee Gikwang’s team danced to Zico’s “Artist.” Despite their talented performance, his teammates were chosen to be eliminated.

From the beginning, the practices of Lee Gikwang’s team didn’t go smoothly. It was clear that Song Ha Jung and Hwang Yong Yeon hadn’t practiced as much as Lee Gikwang had instructed. When Lee Gikwang asked how many times they had gathered to practice, Oh Seung Min replied, “The seven of us have never gathered to practice.” Song Ha Jung had been too busy going back and forth from Japan, and Hwang Yong Yeon had been busy for his entrance examination.

To their excuses, Lee Gikwang said, “I’ll tell you one thing about the fact that you didn’t practice together. If the seven of you can’t meet up, then how can you keep waiting for two people? There are so many issues that I have nothing to tell you.”

Eventually, their rehearsal was full of mistakes. Despite that, Lee Gikwang was sincerely worried about them as he thoroughly monitored their performance and commented, “[This spot] was always wrong. I’m nervous. The things I told [them] about should have been fixed in a short time.”

However, the real performance came out better than expected, and Lee Gikwang praised, “You guys were way better than earlier.” His team had received an average score of 92 points.

The unit performance was done by Oh Seung Min and Moon Seung Sik. They had put on a performance that had been inspired by the movie “IT.” With only a week left before the stage, Oh Seung Min had even showed renewed enthusiasm for composing. Dressed as clowns, the two of them reenacted a creepy mood of dancing. JBlack commented, “It felt like I was watching a horror movie,” and BIGSTAR’s Feeldog praised, “You guys were like professionals.” Their average score was 96, and they ended up tying with Hoya’s team.

However, there was no reversal in the total score. Lee Gikwang’s team eventually came in fifth place, and Lee Gikwang had to choose two teammates to eliminate by himself. After much thinking, he picked Song Ha Jung and Hwang Yong Yeon because they couldn’t participate often in the group practice due to their personal reasons.

Feeling sincerely guilty, Lee Gikwang said, “You did 200 percent of what you could. I’m not just saying this, but this is all my fault. I feel so sorry for you that my insufficiency has made it this way.” He hugged his team and promised, “Next time, I’ll make sure this won’t happen. Let’s show them.” 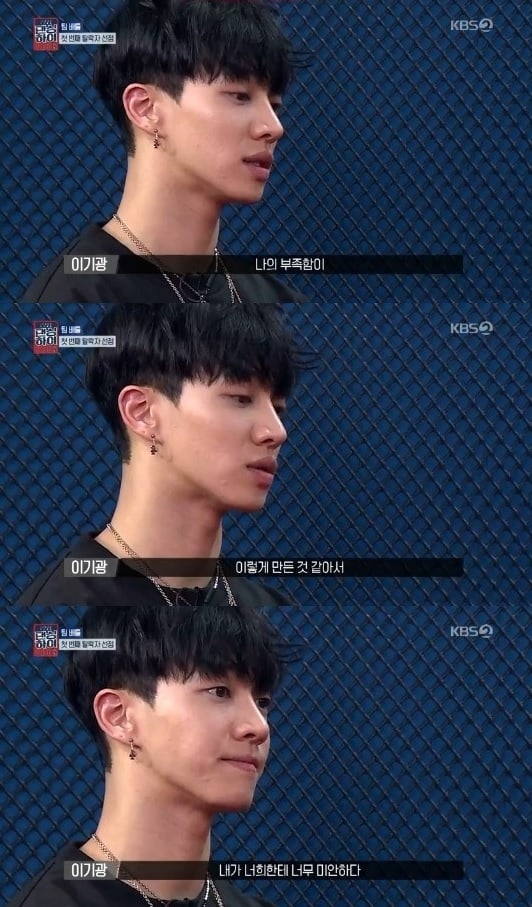 Check out the latest episode of “Dancing High” below!

Lee Gikwang
Highlight
Dancing High
How does this article make you feel?