With less than a day left until its premiere, OCN drama “Player” has released still images of Yoo Seung Ho and Hong Suk Chun’s cameos in the first episode!

“Player” is a caper drama about an elite team of four criminals who join forces to pull off the ultimate heist. Song Seung Heon will star as the talented con artist Kang Ha Ri, while f(x)’s Krystal will be playing Cha Ah Ryung, the country’s top driver. Lee Si Eon will play the role of brilliant hacker Lim Byung Min, and Tae Won Suk will round out the team as the top-notch fighter Do Jin Woong. 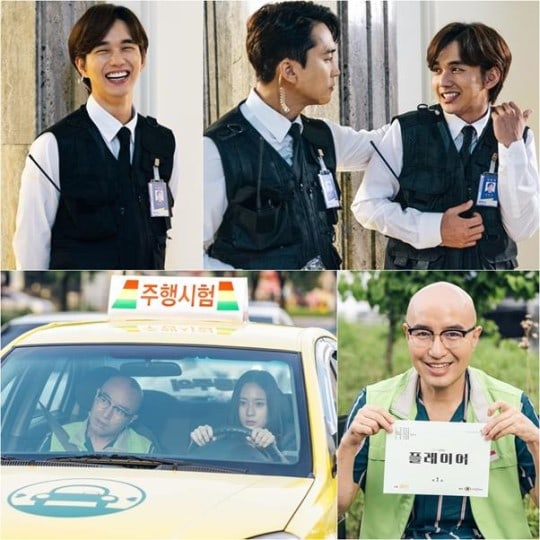 As a new hotel security guard, Yoo Seung Ho will go up against Kang Ha Ri, who visits the hotel to carry out a plan to recover the proceeds of his crime. He will become restless at Kang Ha Ri’s deceitfulness and eloquent speech. Yoo Seung Ho is said to have had a great time on set as he had warm conversations with his senior Song Seung Heon.

Hong Suk Chun will play a driver’s license instructor who originally sits comfortably in the passenger’s seat but becomes shocked after discovering Cha Ah Ryung’s driving abilities. His ad-libs added to the fun of the drama, showing off his great presence without any special lines.

A source from the drama stated, “Yoo Seung Ho and Hong Suk Chun, who readily accepted the role through their relationships with the producers and actors, delivered great energy on set and gave great support to the drama.” They also asked viewers to watch the live broadcast as the meeting between Song Seung Heon, Yoo Seung Ho, Krystal, and Hong Suk Chun will be seen in the first broadcast of “Player.”

Song Seung Heon later uploaded a photo himself posing with Yoo Seung Ho on his Instagram, showing off their friendship.

Check out a trailer here: