As “The Great Battle” continues to do well at the box office, director Kim Kwang Sik sat down for an interview to talk about the process behind his hit movie.

The production cost for “The Great Battle” was 18.5 billion won (about $16.7 million), 18 times the budget of his debut film (1 billion won, or about $901,000). Kim Kwang Sik said, “It’s incredible. 18.5 billion won… It’s an amount of money that I’d never seen or touched before. Personally, I think directors should see the amount of their production budget in cash. That way, they can take responsibility for their movie.” 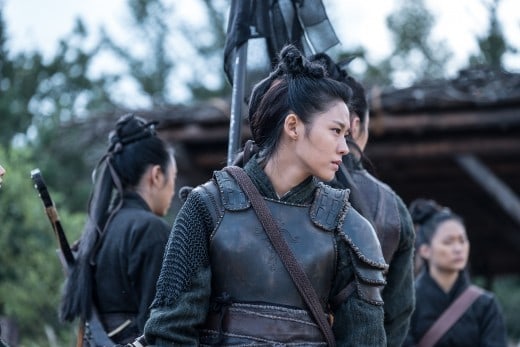 The interviewer commented that Uhm Tae Goo and AOA’s Seolhyun had had a surprising chemistry together, similar to Park Joong Hoon and Jung Yu Mi in Kim Kwang Shik’s debut film.

Kim Kwang Sik replied, “Now that you say that, I think you’re right. I’m the type to prefer an unusual casting when the romance is out of the ordinary. Yang Manchun [Jo In Sung] was cast as a handsome man, so I wanted his younger sister, Baek Ha, to fall in love with someone who wasn’t beautiful. If people who are just good-looking get together, it’s cheesy and not interesting.”

The interviewer also complimented Nam Joo Hyuk’s acting, especially his changing emotions toward Yang Manchun, and mentioned the initial controversy over his casting.

“He was really good when he was in dramas,” Kim Kwang Sik said. “It’s possible that it came across as bad acting when he was playing a role that didn’t fit him. There was controversy after ‘Bride of the Water God,’ but I saw that drama and I wasn’t worried. Nam Joo Hyuk is a talented actor. Even when the set was pure chaos, he had great concentration and was able to show his emotional acting. It’s not easy for a rookie to focus on such a big set, so it’s amazing.”