tvN’s upcoming Saturday-Sunday drama “Room No. 9” has revealed an intriguing chart of its characters’ relationships!

The two women lie at the center of the drama’s relationship chart, connected to one another by their “soul change.” However, equally important to the story is the character of Ki Yoo Jin (played by Kim Young Kwang), a 33-year-old family doctor who holds the key to Jang Hwa Sa’s and Eulji Hae Yi’s fates.

In addition to revealing that Ki Yoo Jin is romantically involved with Eulji Hae Yi, the chart piques viewers’ curiosity about his connection to Jang Hwa Sa by summarizing their relationship with a question mark. His relationship to detective Oh Bong Sam (played by Oh Dae Hwan) similarly remains a mystery.

Oh Bong Sam is a 36-year-old detective who is currently working as a traffic cop. He has a bad history with the ruthless Eulji Hae Yi and has been eagerly waiting for a chance to get back at her. However, once he encounters the “new” and strangely different Eulji Hae Yi (or rather, Jang Hwa Sa in Eulji Hae Yi’s body), he finds himself beginning to like her.

Another point of interest is SHC chairman Ki San (played by Lee Kyung Young)’s complex relationship with Jang Hwa Sa. The 64-year-old executive, whose real name is Chu Young Bae, was once romantically involved with the convict, but their relationship is now described as “revenge.” Ki San also happens to be the uncle of Ki Yoo Jin. 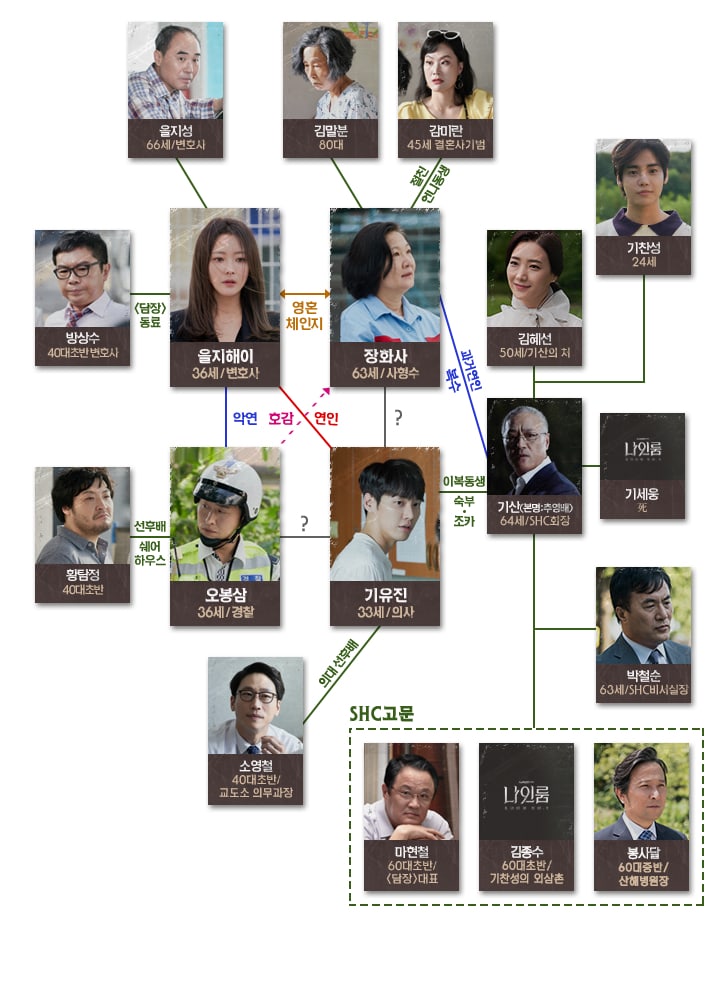 “Room No. 9” premieres on October 6 at 9 p.m. KST and will be available with English subtitles on Viki.