The new “culture-clash romance” will star Kim Ji Suk as the narcissistic Yoo Baek, a former idol and A-list actor who is banished to a remote island after causing some major trouble. While struggling to adapt to his new surroundings, he eventually strikes up a romance with Oh Kang Soon (played by Jun So Min), a tough, hardworking woman who has very little in common with the worldly and sophisticated Yoo Baek.

At the drama’s first script reading, which took place on September 5, the two leads reportedly impressed those present with their lively chemistry and natural acting. Kim Ji Suk was meticulous and detailed in his portrayal of the self-absorbed Yoo Baek, while Jun So Min made everyone smile with her convincing rustic accent.

Lee Sang Yeob also showcased his charisma and skillful acting in the role of Choi Ma Dol, a successful and optimistic ship captain who is something of a celebrity on the island. 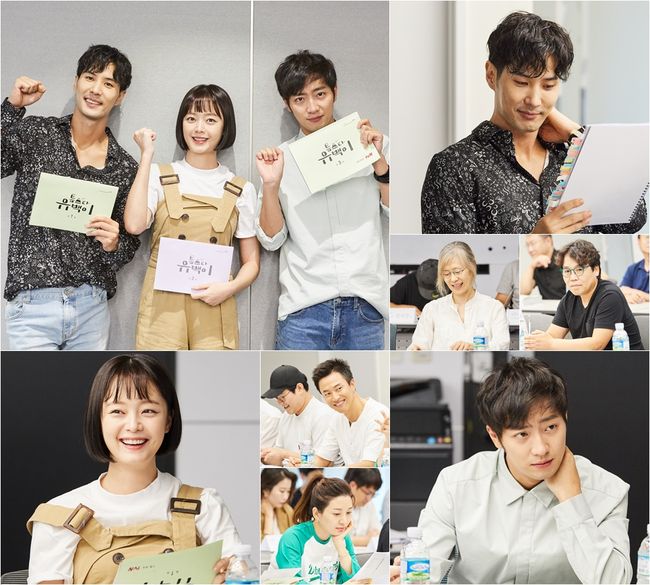 The producers of “Top Star Yoo Baek” remarked, “The script reading was so enjoyable and fun that we had no idea that three hours had passed. All of the actors were not only passionate in their acting, with their roles seemingly custom-tailored to each actor, but they also showed more chemistry and teamwork than we could have imagined. We were very satisfied.”

They added, “We ask that you show a lot of anticipation and interest in ‘Top Star Yoo Baek,’ which is aiming to grab viewers’ attention and make them laugh this November.”