The cast of the Korean remake of “Luther” met up for the first script reading.

The drama will star Shin Ha Kyun as the tough and unscrupulous detective Woo Tae Seok, a character based on Idris Elba’s John Luther from the original British series. One day, he crosses paths with a female psychopath (Lee Seol), but he is unable to arrest her due to a lack of evidence. Eventually, she helps him solve other cases.

In early September, the cast attended the first script reading at the Sangam MBC building. Producing director (PD) Kim Dae Jin showed his appreciation to the cast and crew, saying, “Seeing the actors and staff present in one spot makes me feel sturdy and confident. I hope everyone will not get hurt and be healthy while filming ‘Less than Evil’.” Writers Heo Joon Woo and Kang Yi Hun stated, “While writing ‘The Less than Evil,’ we had thought of many images, and now we’re thrilled to see them in front of our eyes at this script reading scene. We will do our best to write something that makes all the actors here shine.” 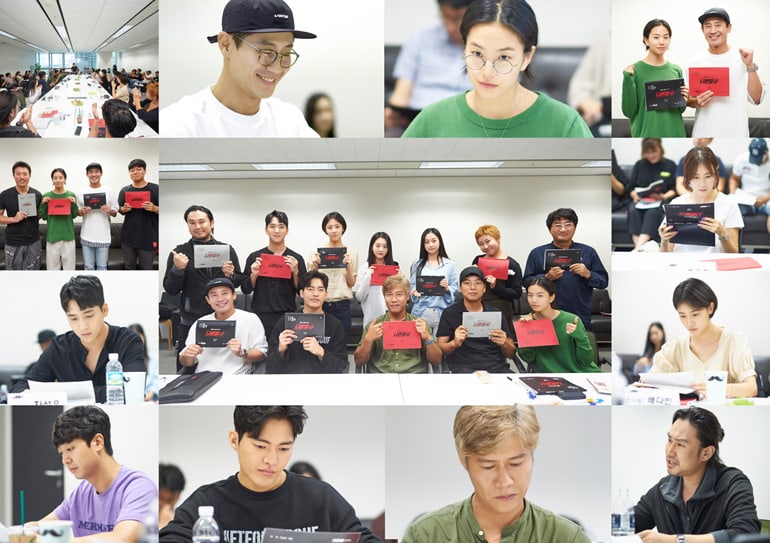 With the start of the full-scale script reading process, the actors showed their roles in an instant, immersive way, and completely implemented characters to raise expectations for the drama. Shin Ha-kyun, who plays the lead actor, completely became the bed detective Woo Tae Seok. He instantly showed his concentration in the drama and analysis of his unique character.

As for Lee Seol, who confidently took charge of the male female role after overcoming a competition of 300 to 1, demonstrated impressive acting skills as Eun Sun Jae. Lee Seol expressed the duality of the genius psychopath character who plays the role of a secret helper so that detective Won Tae Seok could catch the criminal and overwhelmed the atmosphere of the scene to an incredible extent.

Park Ho San also captured the audience by showing a different performance than before. Park Ho San, who plays Jun Choon Man, a leading detective in the metropolitan area who is at odds with Shin Ha Kyun, created a unique sense of presence and aura, adding to the expectations of his character.

With passionate acting, Kim Geon Woo was able to bring horror to the script reading as his character Jang Hyung Min, the serial killer who pretends to be a prosecutor and Woo Tae Suk’s greatest enemy. In addition, all of the other supporting actors immersed perfectly into their given roles, enriching the script reading process with a passionate performance. Even though it was their first meeting, the actors gave off fantastic cues from the perfect acting ensemble, signaling the birth of the powerful synergies and raising expectations for the work to its highest level.

“Less than Evil” is slated to air this winter after “Bad Papa” comes to an end.