IU has achieved another perfect all-kill!

The singer released her newest digital single “BBIBBI” on October 10 at 6 p.m. KST, and soon reigned at the top of all realtime charts just a couple hours later. It also impressively broke IU’s own record for most unique listeners in the first 24 hours of its release, which was previously held by the singer and Park Myung Soo’s duet “Leon.”

Having stayed consistently at the top of the charts, “BBIBBI” achieved a perfect all-kill at 8:30 p.m. KST on October 14!

This means it is No. 1 on every major daily and realtime chart, which includes the charts of Melon, Genie, Bugs, Mnet, Naver, and Soribada, as well as No. 1 on iChart’s realtime and weekly chart. 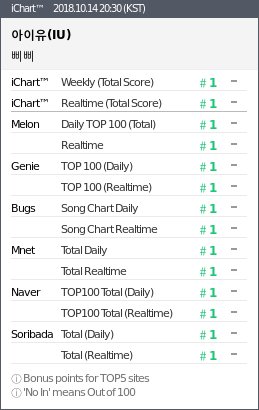