On October 12, representatives of MBC Plus and M-On Entertainment signed a global partnership for the upcoming 2018 MBC Plus X Genie Music Awards (hereafter 2018 MGA).

M-On Entertainment is a Japanese media and creative company that broadcasts to over 7.47 million households nationwide via channels such as J:COM, and HikariTV. Music On! TV airs various programs about artists, recent hit charts, music variety, animation song, and K-pop.

M-On Entertainment recently strengthened the connection between Sony Music Group’s animation business and live performance business, and is developing new media content in order to become a diversified entertainment company. Many are looking forward to seeing if this partnership with 2018 MGA will expand its global platform and create a synergy effect. 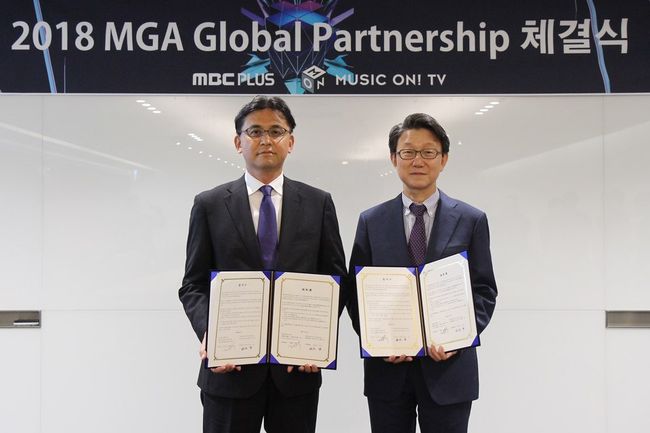 2018 MGA is a new award show that is the first of its kind as a collaboration between a broadcasting network and music platform. Korea’s hottest musicians and idols are expected to attend the event where never-before-seen special collaboration stages between K-pop and foreign artists are planning to take place.

So far, BTS, TWICE, and Wanna One have confirmed their attendance. 2018 MGA will take place on November 6 at the Namdong Gymnasium in Incheon. Check out this year’s nominations here!

2018 MGA
M-On Entertainment
How does this article make you feel?