B1A4’s Sandeul celebrated his 100th day hosting his MBC radio show “Sandeul’s Starry Night” with the help of his friends.

Sandeul is the 26th DJ of the renowned radio program after H.O.T.’s Kangta and has been hosting the show since July 9.

On the October 16 broadcast, Sandeul was joined by VIXX’s Ken and fellow B1A4 members CNU and Gongchan. Sandeul began the show by announcing that it was the 100th night of his show.

He said, “Since today is a celebration, I invited my friends. Today really belongs to all of you. I will listen to all of you congratulating me on my 100th day, how I’ve been until now, and what you hope from me and from ‘Sandeul’s Starry Night.’”

CNU, Gongchan, and Ken then entered the studio. CNU and Gongchan have promoted with Sandeul in B1A4 for seven years. They congratulated him and handed him a flower crown and a cake.

Ken said, “I came to congratulate you on your 100th day,” and handed him flowers. CNU said, “We all have a friendship with Ken,” and Ken added, “We’re all close.”

Sandeul asked, “What kind of friend am I?” and Ken answered, “Sandeul is like his name Sandeul. He’s like a field and is a dependable friend. We’re doing a musical together and I try to work hard seeing Sandeul trying his best whether it’s with singing or acting. Also, he’s a senior. Seeing those kinds of things, I think of him as a very dependable friend.”

The guests then participated in a test of loyalty. Sandeul asked, “Is there anything you think you could do for Sandeul?” Ken responded, “I could give Sandeul my liver.” Gongchan surprised everyone when he said, “I could do everything for you. In terms of doing something that you can see, I could co-sign for you.”

When Sandeul commented, “That means you’re giving me everything,” Gongchan said, “I like you that much and think about you a lot. You’re someone that I trust and follow a lot, so I could do anything for you.”

CNU said, “I could die for Sandeul. I think I went too far. Sandeul and I live far away. When Sandeul calls me saying, ‘I miss you,’ I could come over right away.” Sandeul shyly explained, “I don’t really call and say that I miss him. I don’t say things like that.”

During the episode, they also listened to Sandeul’s first episode as a DJ. When asked if there was anything he wanted to say to himself hosting his first night of the radio show, Sandeul said, “You should let some things go.” 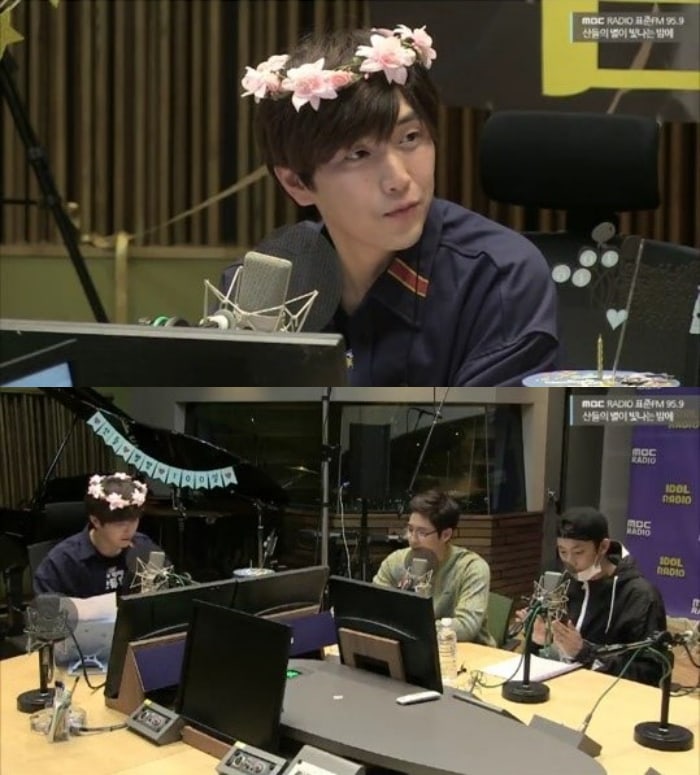 MAMAMOO’s Moonbyul had a scheduled event and couldn’t congratulate him in person, but called into the show. BTS’s Jin, who is also part of the “’92 club” and is currently on a world tour in Europe, sent a voice message to congratulate Sandeul.

Jin said, “Sandeul, you’re really amazing for introducing good songs and warm music to everyone. I hope you’ll continue to spend nights with the listeners for a long time.” After listening, Sandeul said, “He sent this to me saying that he’s congratulating me on my 100 days, so I revealed it like this.”

CNU said, “Good job,” and Sandeul added, “Thank you, really. I was thankful that Jin congratulated me first that it was my 100th day. He told me to use this, so I gave it to the staff.” CNU added, “It’s nice to hear his voice.”

Talking about Jin, Sandeul continued, “He’s working really hard on the world tour. Every time he comes to Korea, he keeps asking me to play games. It’s all because of Ken.” Ken denied this and Sandeul continued, “Hurry up and install the game. It’s tiring.” When asked what game it was, Sandeul answered, “It’s a character that we used to play a long time ago in elementary school. He keeps playing [MapleStory].”

Sandeul concluded, “Jin, thank you so much, and I’ll buy you a meal. The number of people I need to buy meals for is increasing.” Thanking his friends for stopping by the studio, Sandeul stated, “I don’t know how much I can do for you guys, but I will do everything that I can. As much as you guys need me, I’ll be by your side. I’ll always be with you.”