On October 21, Jung Ji Seok, the lawyer representing brothers Lee Seok Cheol and Lee Seung Hyun, refuted the statements made by Media Line Entertainment and its CEO Kim Chang Hwan. He stated, “A part of the media’s debate for the truth is wrong.” He also emphasized, “The essence of this situation is that producer Moon habitually abused The East Light’s members for about four years, starting around March 2015 up until now. He inflicted wounds using various [weapons] including a baseball bat, a metal microphone, and an iron handlebar.”

Jung Ji Seok also responded to the recent report that the reason the agency had removed Lee Seung Hyun from the group was his character. The agency had cited an incident in which Lee Seung Hyun allegedly glared at producer Moon Young Il and told him, “Please don’t talk if you’re a person who hits people.”

The lawyer remarked, “A debate for the truth is only a frame to distort the essence of the issue. [The agency] has even brought up the issue of Lee Seung Hyun’s character, and they are attempting to use false equivalence [as if both sides are partially in the wrong]. There is nothing that can justify abuse.” 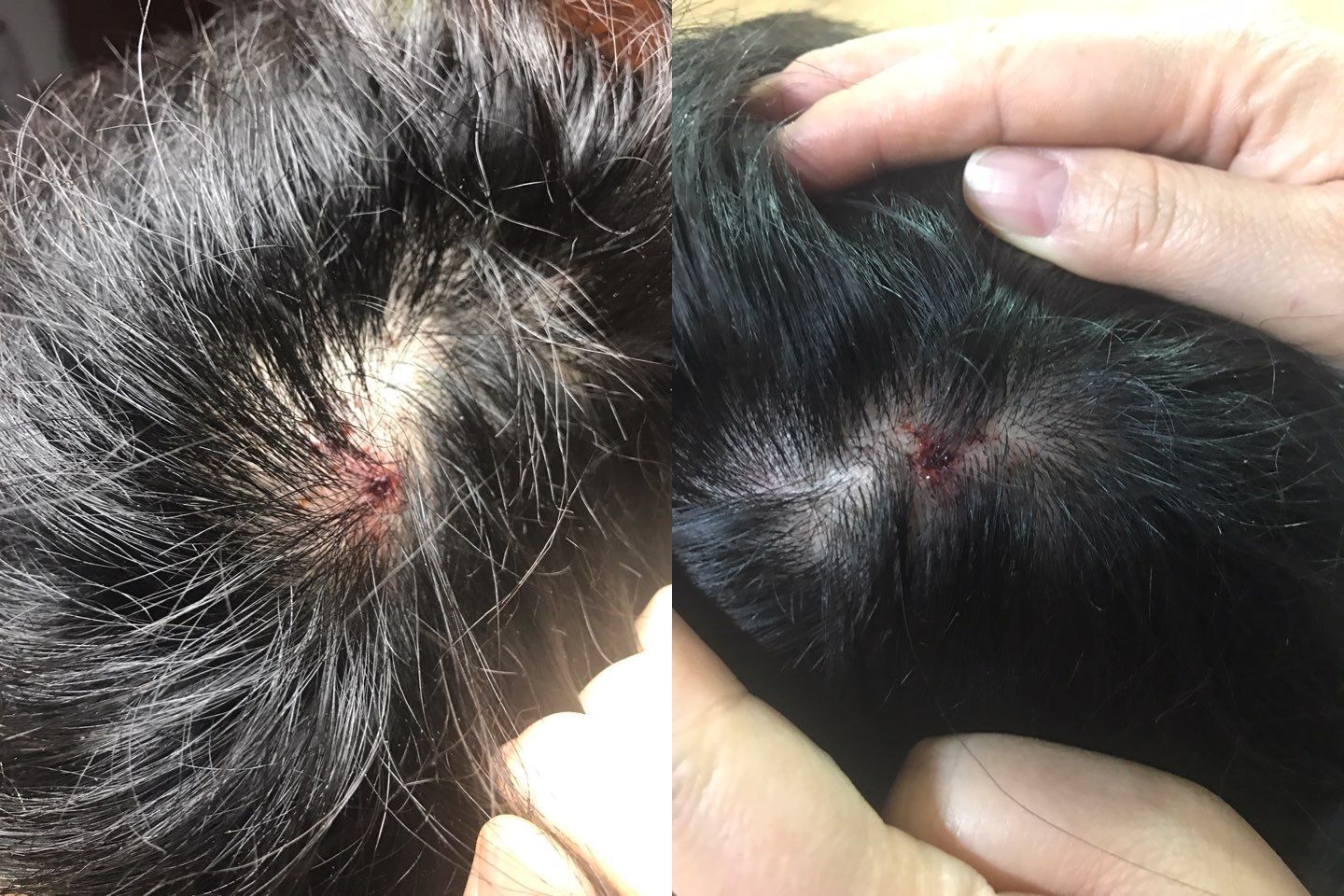 The attorney went on to disclose a recording of a phone call and several text messages that Lee Seung Hyun’s father had exchanged with producer Moon Young Il and CEO Kim Chang Hwan.

After Lee Seung Hyun was removed from the group on October 4, Kim Chang Hwan called Lee Seok Cheol twice, on October 11 and October 15, and Lee Seok Cheol recorded both conversations. Jung Ji Seok, who only released part of the recording to the press, stated that he is planning on submitting the entire recording when he files criminal charges.

Below is a translation of the text messages revealed:

[The first two conversations are between producer Moon Young Il and the father of Lee Seok Cheol and Lee Seung Hyun.]

Father: This is a photo of the wound you left on Seung Hyun’s body.. You might have forgotten about it, but the evidence still remains..

Father: Keep in mind that you are not in a position [to abuse your] power, and do not commit any cruel acts or criminal offenses such as physical violence, verbal abuse, and surveillance of The East Light members. I hope that you practice respecting a person’s humanity.

Father: Mr. Moon Young Il, I hope that you keep in mind that as of now, if you commit any criminal offenses against The East Light members, including Seok Cheol and Seung Hyun, that I will not only take legal action but I will also prepare a large civil lawsuit against you.

Moon Young Il: I will repeatedly keep in mind everything that you have said.

Father: You don’t seem to be getting the point. You shouldn’t just keep it in mind, you should also put it into practice..

Father: Mr. Moon Young Il, this is an image of the handlebar that you used to hit Seung Hyun, do you remember? I’m sending this to you so that you can remember, in case you forgot..

Moon Young Il: I apologize.. I feel like there is nothing else for me to say to you..

[The following two conversations are between CEO Kim Chang Hwan and the father of Lee Seok Cheol and Lee Seung Hyun.]

Father: CEO Kim, I tried to think of it in a positive light, but there are things that just aren’t right.

Father: I officially request that producer Moon be dismissed [from the company].

Father: CEO Kim, I will be in Seoul on the evening of Wednesday, August 23. Do you have time for us to meet and talk face-to-face?

Kim Chang Hwan: Yes. I will make time [to see you]. 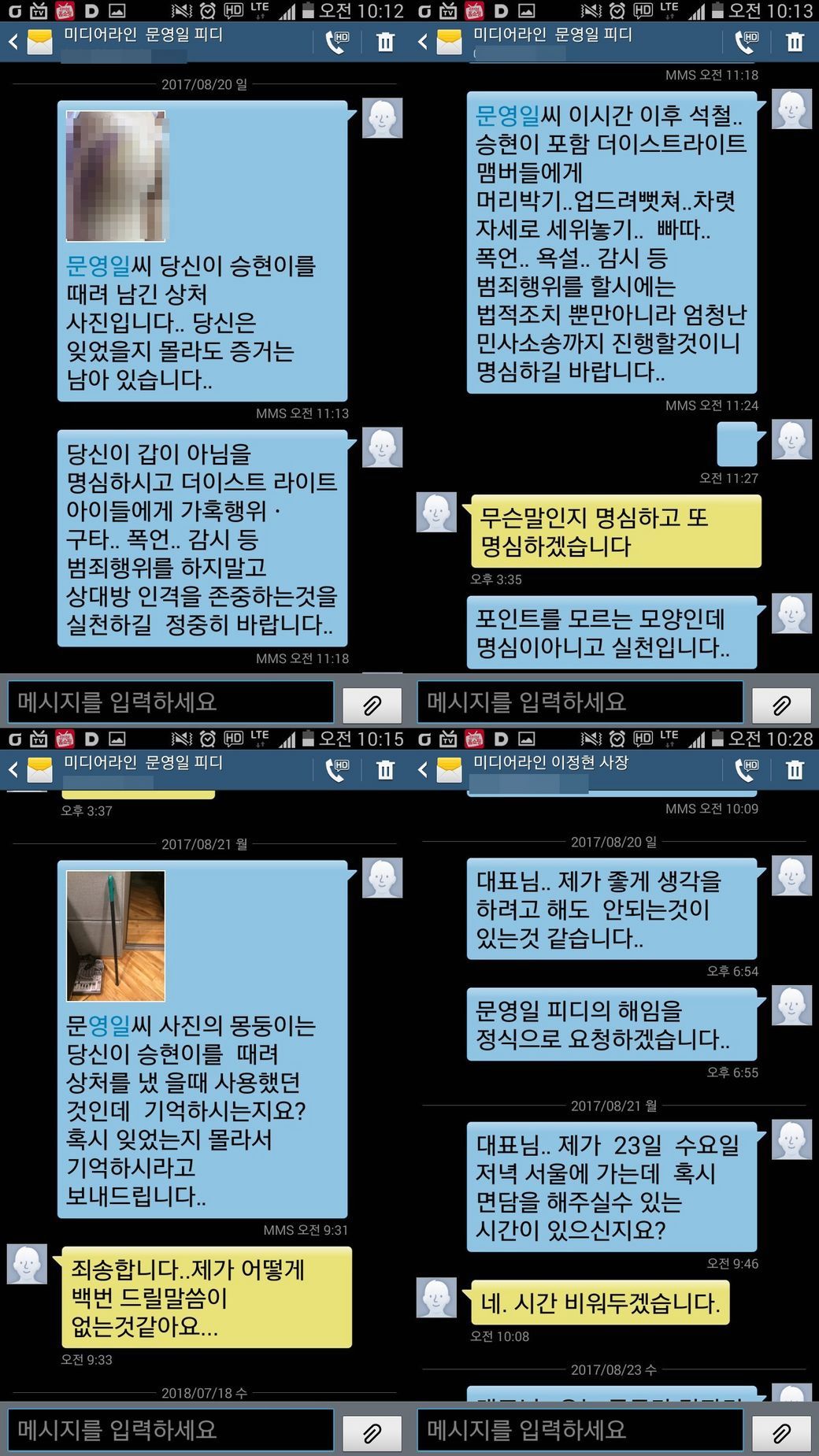