The idol appeared on the latest installment of SBS’s documentary series “SBS Special,” titled “The World That Idols Live In — After The Stage.” The documentary, which aired on October 28, put a spotlight on the difficulties faced by many idols after their groups disband or cease active promotions.

During her interview, Heo Young Ji talked about feeling lost after KARA’s disbandment in 2016, sharing that she had even developed an eating disorder. Describing how she had felt after hearing the news, Heo Young Ji recalled, “Rather than fear, I just kept thinking, ‘What should I do?’ and ‘What can I do?'”

She went on, “When I was with [the other KARA members], I felt like they were protecting me, and it seemed like I could achieve something. But [without them], I wondered if I would be able to ever stand on stage again, and that thought made me incredibly sad.”

Heo Young Ji explained that she had begun binge-eating as an unhealthy coping mechanism. “For a brief period of time after KARA ended, I was in such a state of mental shock that I actually developed binge-eating disorder,” she said. “I ate so much. No matter how much I ate, I didn’t feel full.” 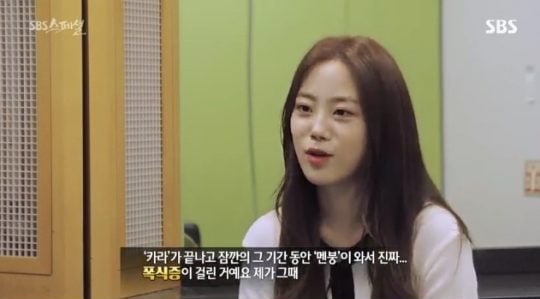 In order to evade the watchful eye of her manager, the former KARA member even took the batteries out of her front door’s entrance alert. “I removed the batteries so that the front door wouldn’t make a sound, and then I ran to the convenience store in the rain,” she recalled. “And then I ate while crying.”

“My group was gone,” she continued, “so of course I was upset. At the time, I didn’t know how to deal with my feelings.”

However, Heo Young Ji reported that in spite of everything, she had truly enjoyed her career as a girl group member. “When I think about it, there was more happiness than there were difficult times,” she said. “I’d want to be an [idol] again, but I’d also be afraid of ending up on the same path.”

Heo Young Ji joined KARA as a new member in 2014, two years before the group eventually disbanded in January 2016. She went on to make her solo debut in 2017 with the single “Memory Clock.”

Heo Young Ji
KARA
How does this article make you feel?