“Story Of Yanxi Palace”: The One Historical C-Drama You Shouldn’t Miss

While everyone was waiting with bated breath for the arrival of the much buzzed about “Ruyi’s Royal Love in the Palace,” “Story of Yanxi Palace” (hereafter “Yanxi”) stealthily sneaked onto the playing field and immediately took Asia by storm. Despite somewhat lacking in big headlining names and pre-production hype, this Chinese period drama still managed to defy expectations and capture everyone’s hearts with characters to love (and love-to-hate), a gripping story line, and the drop-dead gorgeous aesthetic.

“Yanxi” is, at its core, a story of revenge. Wei Ying Luo (Wu Jin Yan) decides to enter the Forbidden City and work as a seamstress as a means to uncover the real story behind her older sister’s death. While there, she meets the various conniving consorts, the kind Empress Fucha Rong Ying (Qin Lan), her brother Fucha Fu Heng (Xu Kai), as well as Qian Long himself, Emperor Hong Li (Nie Yuan).

So what has got people loving this drama so much that they blew up streaming views and ignited a wave of “Yanxi” inspired items? Read on and find out!

I’m sure you’ve heard this before, of a reviewer touting a strong, badass female lead who doesn’t need men saving her at every turn. But trust me when I say that Wei Ying Luo is the epitome of “girl power,” made even more impressive by the fact that her story is set in the Qing dynasty, a time period where women are naturally expected to be subservient to men.

What makes Wei Ying Luo so special is that not only does she not need men to save her, but she can easily manipulate and outmaneuver the best of them. There is no cowering in the shadows or crying in the corner for her — if you’ve wronged her in any way, you can bet she’ll be coming after you guns fully loaded (so to speak). 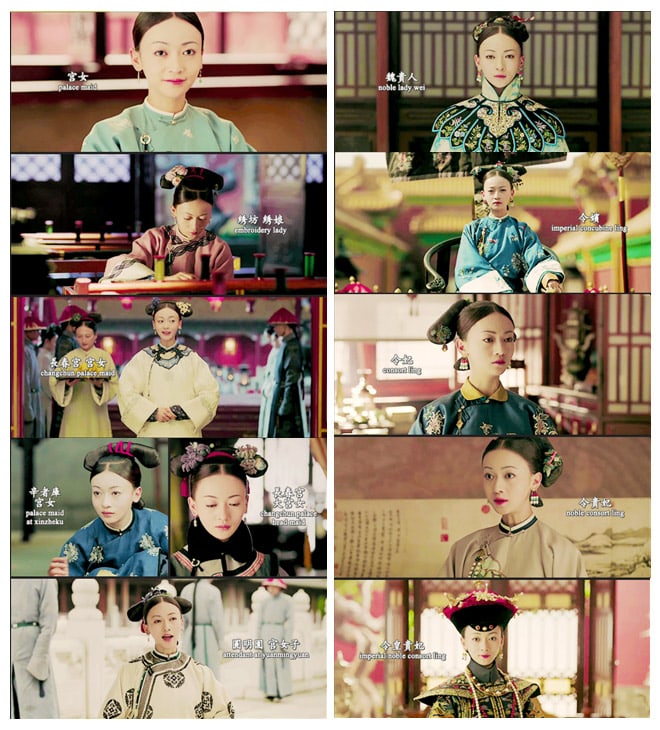 Wei Ying Luo’s journey plays out like an old school RPG game – where you have to defeat mini bosses and constantly level up – and that’s exactly what she does. She starts out as a lowly seamstress in the Forbidden City, and makes her way through the many progressions and status upgrades, armed mostly with just her cunning and wits. There’s no parade of men doting on her and offering her help along the way. In fact, the only person that she really constantly has in her corner is Empress Fucha Rong Yin.

Speaking of the Empress, the relationship that she and Wei Ying Luo share is a defining point in the latter’s journey. A main staple of these period dramas is the backbiting and power struggle between the women in the Emperor’s harem. In fact, that is probably a huge reason we watch these type of shows. But with “Yanxi,” we are also shown strong female bonds, first between the Empress and Ying Luo, and later between Ying Luo and Ming Yu. The Empress takes Ying Luo under her wings and passes along much of her wisdom and teachings. Her nobility and grace rubs off on Ying Luo too, and softens her rougher edges. In return, Ying Luo is fully dedicated and loyal to the Empress, which eventually catches the Emperor’s attention.

As the story progresses and Ying Luo becomes one of the Emperor’s women, she naturally becomes embroiled in all the drama that comes with the position. And as mentioned earlier, this is probably one of the main reasons we watch these type of period dramas. From all the various back-stabbing consorts, to the viscous Er Qing, and to stalker-ish Yuan Chun Wang, there are plenty of schemes and revenge plots to keep the story line moving at a fast pace. There’s nothing more satisfying than watching these villainous characters being taken down and given what they deserve.

Another unique aspect of Wei Ying Luo, and the drama at large, is that romance is never on the forefront of her mind, but rather just something that naturally occurs. When Fucha Fu Heng first shows interest in her, she never lets him cloud her judgement or distract her from her initial mission to find her sister’s killer. Even later, when Fu Heng is betrothed to Er Qing, she never once looks back or hangs on to him. It’s definitely refreshing to not see them pine away for each other, even though it is clear their feelings are strong for each other.

We get a sweet and innocent relationship in the blossoming stages from the Fu Heng and Ying Luo pairing, but because they never quite make it (though they certainly did in our minds), we barely get the cute, lovey-dovey scenes from them. But what we don’t get from them, we get in spades from Ying Luo and the Emperor. While Ying Luo only wants to be a consort to have the power to exact revenge at first, she eventually falls for the Emperor too. And the more Ying Luo toys with the Emperor, the more he becomes fascinated with her. They are both immensely intelligent, and it’s always fun to see them try to outwit and one-up each other in the relationship. By drama’s end, they are so smitten with each other that all the sweet moments are enough to fill the Fu Heng-shaped holes in our hearts.

Anyone who’s seen this drama will rave about the amazing production, from the aesthetics, to the set design, to the costumes — everything is exquisite. Gone are the loud and oversaturated colors of other similar dramas, and instead we are treated to a more subdued and earthy color scheme, giving the whole drama a more classy look that is also more pleasant on the eyes.

The grand set pieces and the beautifully embroidered costumes immediately transports us to the grandeur and lavishness of the Forbidden City. In fact, the production team deserves a major kudos for really researching and respecting their history in terms of story line and set design. Even the small details, such as the head pieces and earrings worn, closely mirror the time period — an accomplishment not many period dramas can boast.

There really are so many things to love about this drama, from everything mentioned above to the glorious acting from the break-out stars. So if you haven’t watched this, start streaming right now!

For those of you who have watched this, who’s your favorite villainous character in the drama? And who’s the most pitiful among all the consorts? Let us know in the comments below!

Belinda_C had fun retrieving her “My Fair Princess” knowledge to identify the characters in this drama. Her favorite will always be Wu Ah Ge! And Shinhwa/SEVENTEEN! Come obsess over them with her on Twitter!

Currently watching: “Room No. 9”
All-time favorite: “My Fair Princess” (I’ve watched this more times than I can care to admit)
Looking forward to: “Mama Fairy and the Woodcutter“