On the November 2 episode, Matthew Douma participated in the chemical, biological, and radiological exercise.

After a hard day of training, he returned to the dorm where he called his daughter. He explained to the other soldiers, “She practiced until late last night, so she was sleeping. I just woke her up.” Jeon Somi recently signed with The Black Label and is preparing for her upcoming debut.

He then held up his phone and introduced everyone to Jeon Somi. She let out a shy laugh and said hello to everyone. When the soldiers stayed silent, Matthew Douma said, “Don’t just look at her. Say something.” 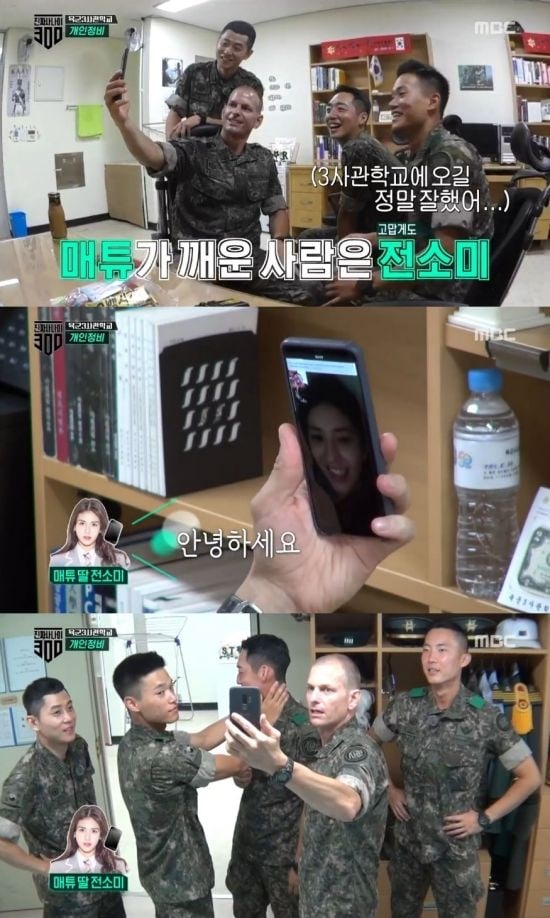 Jeon Somi asked, “Dad, are you doing a good job?” A soldier next to him replied, “I’m worried because he’s working so hard.” She added, “Dad, I feel like you got younger.” Just then, another soldier walked in and said hello to her with a bright smile on his face.

She continued, “Dad, if I knew it was going to be like this, I would’ve gotten up and put on pretty clothes.” The others assured her that it was okay and her dad walked around to show her more of the living quarters.

Matthew Douma then made her laugh after one of the soldiers, who is an advertising model for his school, struck a silly pose. She told them, “All of you are so handsome. I want to enlist in the military.” They replied, “You can come any time,” and Matthew Douma added, “It’s easy to say that, but be careful what you say.”

She continued, “My dad really likes to exercise and likes the military so much, so his spirits are at an all-time high right now. Please accept him and love him.”

Somi
Matthew Douma
Real Men 300
How does this article make you feel?