BLACKPINK’s Jennie has achieved a certified all-kill with “SOLO“!

The girl group member dropped her first solo track “SOLO” on November 12 and soon after took over major realtime charts, as well as iTunes charts around the world.

On November 14 at 1:30 p.m. KST, “SOLO” came in first place on the realtime and daily charts of all six major Korean music sites (Melon, Genie, Bugs, Mnet, Naver, and Soribada) as well as iChart’s realtime chart. This means it has achieved what’s called a “certified all-kill.” 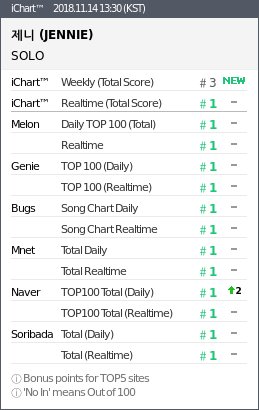 For a song to reach a “perfect all-kill,” it needs to also be at No. 1 on iChart’s weekly chart.