The Simon Wiesenthal Center announced on November 13 in a brief post titled “Wiesenthal Center Welcomes K-Pop Group’s Apology For Incidents Offensive To Jewish And Japanese Victims Of WWII” that Big Hit Entertainment has sent them an apology and that the center “welcomed” it. The center included an image capture of the apology, which you can find below.

In the apology, Big Hit wrote:

Big Hit Entertainment is aware of the current incident surrounding our artist. The artist was seen wearing a hat that we understand was deeply offensive in a 2014 magazine photoshoot, given to him from a collection of the magazine’s stylist. Big Hit Entertainment is deeply conscious of our responsibility, as it is no excuse that we failed to screen the matter and regret that it happened. We will continue to educate ourselves, be more sensitive to such matters, and protect our artist from such incidents and the implications they may carry. We sincerely apologize to anyone who took offense in regards. It is worth noting that the artist has shared a message recently at the UN, which demonstrated their consistent beliefs that loving yourself and love for others are of primary importance in the world now, and that been a global message for the artist. Both Big Hit and the artists hope to continue spreading that message and share love for all humankind.

Again, thanks for your time and attention. 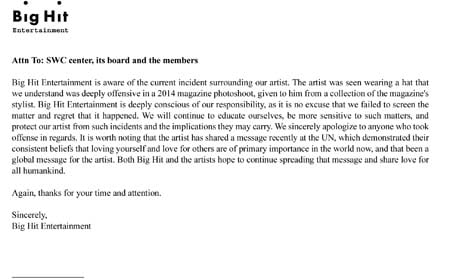 Previously, Big Hit Entertainment had released an official statement about the recent controversies surrounding BTS in regards to various clothing items worn by members in the past that included imagery of an atomic bomb and a Nazi symbol. The agency had stated that they would send a letter explaining and apologizing for the situation to the Simon Wiesenthal Center.