HaHa made a surprise appearance at the comeback showcase of his wife Byul to show his infinite love and support for her.

On November 16, Byul held a comeback showcase for her new single album “Because Tears Came to My Eyes” (literal title) at the West Bridge Live Hall. The new song expresses the various feelings a person goes through after meeting their partner who hints at a breakup.

The event was made even more special when her husband HaHa, who also holds a high-level position in her agency Quan Entertainment, made a surprise appearance. He got on stage and said, “I’m really excited for Byul’s return to the stage. It doesn’t matter to me what her rankings are on the charts, but I believe it will be song that people will listen to over and over again.” He then had everyone laughing when he joked about the fact that the song centers around the theme of breaking up as he said, “I wonder who she was thinking about when this song was written.” 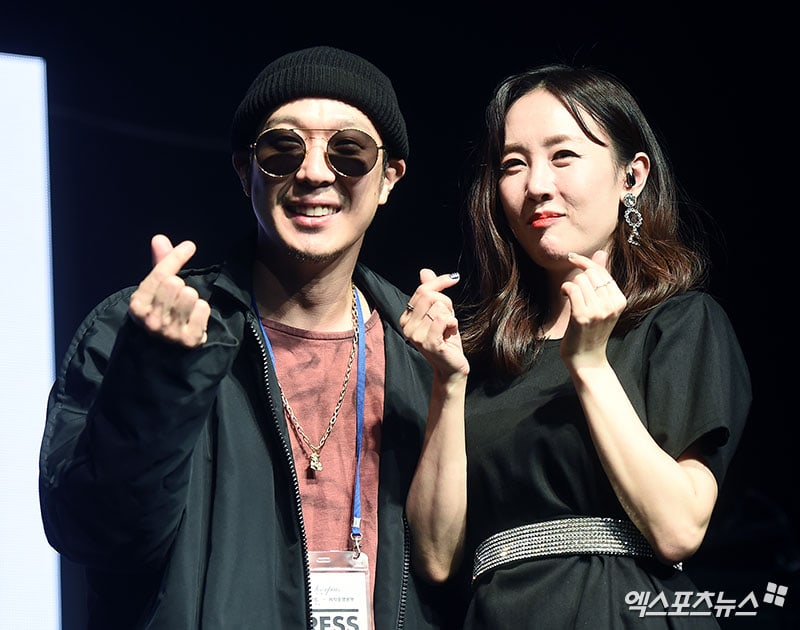 Before his appearance, Byul had talked about how much support she had been receiving from HaHa. To this, he added, “Actually, I wasn’t able to take of our son very much this summer. Byul once came to our concert with our son in her arms, and it made me feel strange and quite sad. I was grateful, but I know that she is a much more stable and talented singer than I am. Deep in my heart, I thought, ‘The place you should be standing is here, on stage.’ Next year, I’ll be the one going to her concert with our son in my arms.”

He continued his praise for Byul as he described her as a passionate and detail-oriented singer. HaHa jokingly added, “Her music always passes the break-even point and makes a profit. She’s a confident singer who completes any stage she’s on. She’s too big of a star to be at our agency. If JYP is watching, I hope they offer her a lot of money and sign her on with their agency.” To this, Byul laughed and said, “I’m too old for them. How could I go?”

Byul will be releasing her new single album on November 16.

Byul
HaHa
XPN
How does this article make you feel?