The new drama will follow the story of Cha Soo Hyun (Song Hye Kyo), a conglomerate heir divorcee and politician’s daughter who has never once lived for herself, and Kim Jin Hyuk (Park Bo Gum), a free-spirited youth who lives a simple life.

Through their official Twitter account, tvN shared more detailed descriptions of each character in the new drama. 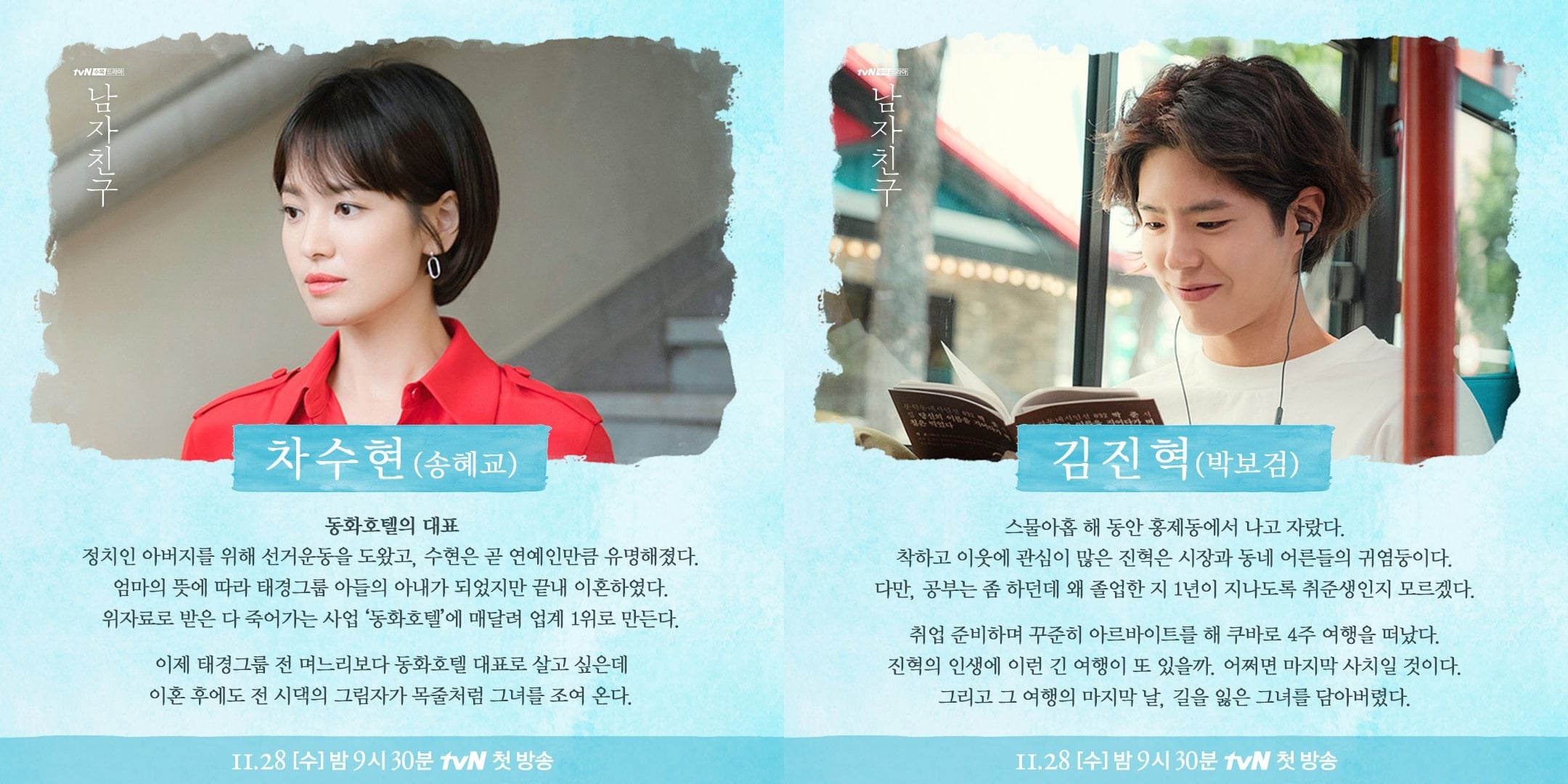 Cha Soo Hyun is the head of Dong Hwa Hotel, and she is described to be someone who help her father in his election races and became famous enough to be considered a celebrity. She married the son of Tae Kyung Group to appease her mother, but that marriage ended in a divorce. She received the Dong Hwa Hotel as her alimony and made it the best in the industry. She wishes to be known as the head of Dong Hwa Hotel, not the former daughter-in-law of Tae Kyung Group, but the shadow of her former in-laws still looms over her.

Meanwhile, Kim Jin Hyuk is a 29-year-old who was born and grew up in Hongjae-dong. Always a kind kid who stayed connected to his neighbors, he has always been adored by the elderly who live in the area. However, they’re curious to know why he still hasn’t found a job a year after graduating, despite being quite a good student. Kim Jin Hyuk works part-time jobs while job-hunting and decides to travel to Cuba for four weeks, thinking of it as his last treat for himself. And it’s on the last day of his trip that he runs into a woman who is lost, and his life changes from there.

Jang Seung Jo will play Jung Woo Seok, the head of Tae Kyung Group and Cha Soo Hyun’s ex-husband. He has dated many women who have wanted nothing more than to become a part of his family and their status. Cha Soo Hyun was different for him, and he hoped she would love him back too but when that didn’t seem to be in the picture, he told her that he found someone else and asked for a divorce.

The role of Jo Hye In will be taken on by Jeon So Ni, who is an employee of Dong Hwa Hotel’s PR team. She’s a childhood friend of Kim Jin Hyuk, and has developed feelings for him. She has always felt that Choi Jin Hyuk has led a busy life and hopes that once he gets a job and settles down, he’ll have the time to finally see who she is and fall in love with her.

Go Chang Suk will play Nam Myung Shik, Cha Soo Hyun’s driver. He went to college with Cha Soo Hyun’s father and was a reporter for a long time. At the request of her parents, he became her driver and caretaker. As he’s taken care of her since she was young, Nam Myung Shik is who Cha Soo Hyun turns to when she needs someone to talk to as he’s never afraid to give her straight answers.

Kwak Sun Young will play Jang Mi Jin, Cha Soo Hyun’s secretary and friend as they went to high school together. She is the only person who will listen to Cha Soo Hyun’s personal troubles, and Cha Soo Hyun relies on her as a friend. Though she’s missed out on great catches as she’s always busy with work, she doesn’t mind and though she says she dislikes Cha Soo Hyun for it, it’s all empty words as she cares for her friend.

Kim Hwa Jin will be a character played by Cha Hwa Yeon, who runs Tae Kyung Group and is the mother of Jung Woo Seok. She is someone who values protecting her family’s name at all cost. She’ll even invite her former daughter-in-law to her birthday dinner for appearance’s sake and send her a dress code.

Block B’s P.O will play Kim Jin Myung, Kim Jin Hyuk’s younger brother. He is a carefree and cheerful person who gave up college immediately as he believed it wasn’t what he needed. He wants to succeed as a business owner but doesn’t see a future in his father’s fruit store. He’s in the process of coming up with his own plans. 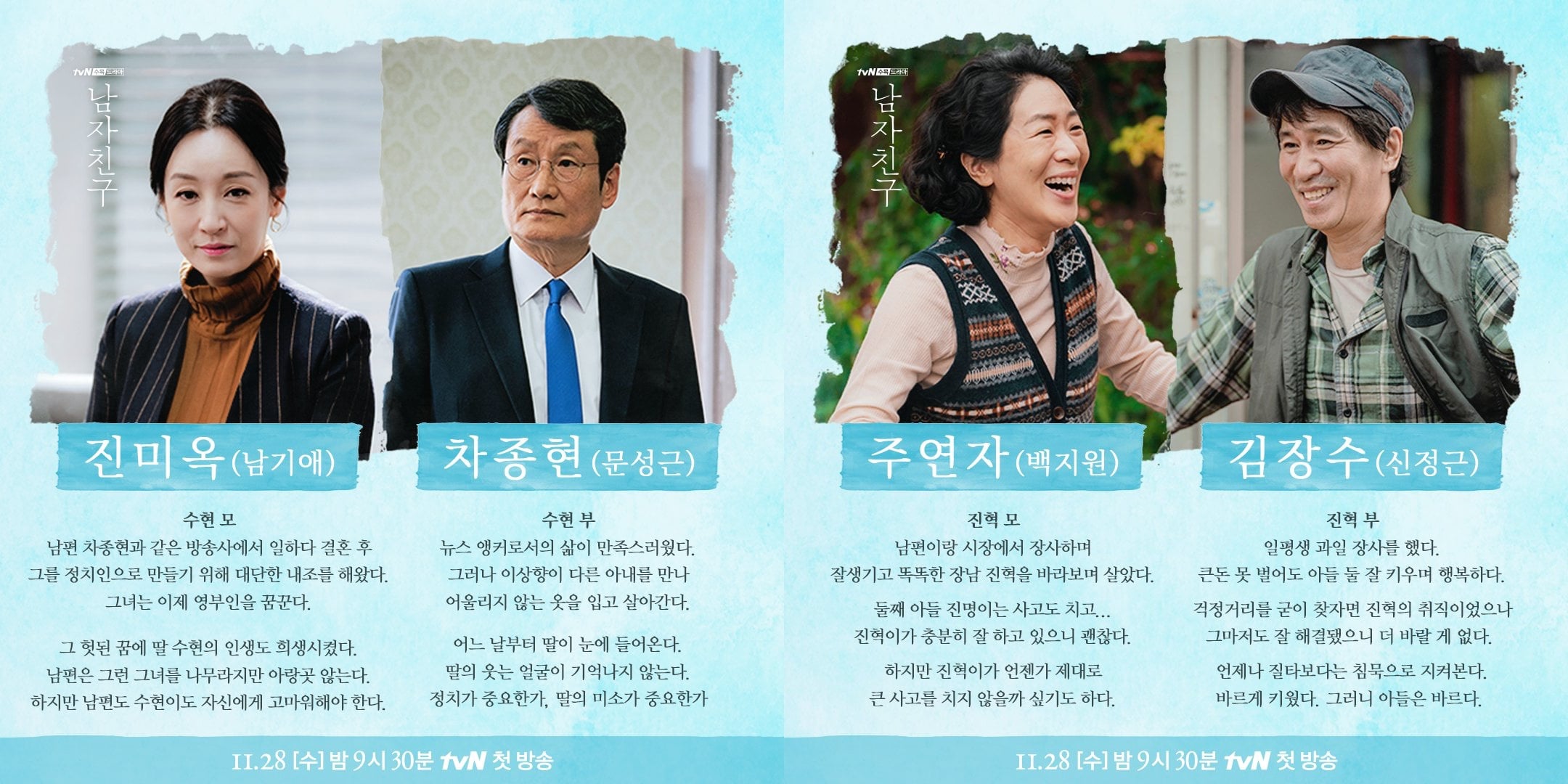 Nam Ki Ae and Moo Sung Geun will be playing Jin Mi Ok and Cha Jong Hyun, Cha Soo Hyn’s parents. They were both working in the same broadcasting station when they met and got married, and she has been the driving force behind his political career. She is willing to sacrifice her daughter to climb up the social ladder and she feels her family should be grateful to her for pushing them so hard. Meanwhile, Cha Jong Hyun was content with his career as an anchor but was willing to give it up for his wife. But he begins to question if he’s doing the right thing when he realizes he hasn’t seen his daughter smile in a long time.

Baek Ji Won and Shin Jung Geun will play Joo Yeon Ja and Kim Jang Soo, Kim Jin Hyuk and Kim Jin Myung’s parents. They run a fruit store and have done their best to raise their two sons. They worry about their second son getting into trouble but are assuaged by their bright and mature first son.