BLACKPINK’s Jennie has made her mark as a solo artist!

As of November 28 KST, Jennie’s “SOLO” ranked No. 1 on Billboard’s World Digital Song Sales chart. BLACKPINK previously achieved No. 1 and No. 2 on the chart with “BOOMBAYAH” and “Whistle” respectively, a first time achievement for a rookie girl group. Their other songs such as “Playing With Fire,” “As If It’s Your Last,” and “DDU-DU DDU-DU” also rose to the top of the chart. 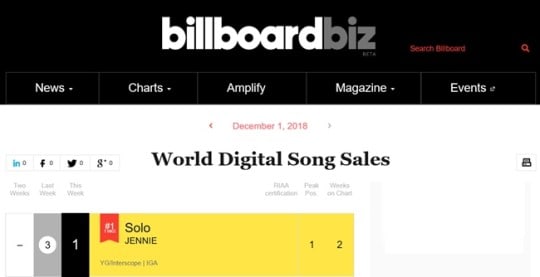 Including BLACKPINK’s previous rankings, Jennie’s latest achievement marks the fifth time that she has topped the chart. Her debut track has also received much love both domestically and all over the world, as it topped various iTunes charts as well as major realtime charts in Korea.