When Kim Nam Joo won Best Actress at the 2nd Seoul Awards on October 27, she mentioned Kim Hye Soo in her awards speech.

Her words were, “I wanted to make sure I mentioned this person. Kim Hye Soo was kind enough to give me a phone call to congratulate me. I will work hard to become as good of a senior as she is. Thank you.” 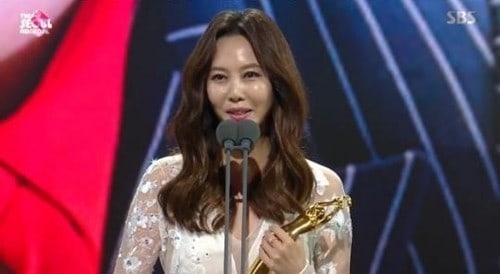 In a recent interview, Kim Hye Soo talked about the speech and her feelings upon seeing her fellow actress win the award.

“I did see the speech that Kim Nam Joo gave,” she said. “I think that our hearts were in communion with each other at that moment. This was Kim Nam Joo’s first drama in a long time. If you have to act after a long hiatus, it can be really scary.”

She continued, “I was well aware of that, so I was so proud of her. I even got emotional and teared up. I hoped that my words could comfort her, so that’s why I called her. To tell her that she did well.”

As she talked, she got emotional again and said, “I am tearing up a little even now. It’s not because I’m her senior… Honestly, what are seniors or juniors? Everyone is in the same situation. I’m just happy that she was able to do well. It’s a kind of solidarity, I think.”

Kim Nam Joo won the award for her role in the drama “Misty,” which was her first TV drama in six years. Kim Hye Soo, meanwhile, is promoting her latest film “Default,” which is about the 1997 Asian financial crisis.

Kim Hye Soo
Kim Nam Joo
How does this article make you feel?