9 Perfect K-Dramas To Watch During The Holiday Season

‘Tis the season to hole up indoors, hide away from the cold and snow, and delve into some escapism. Gather all the snacks and festive hot drinks and wrap yourself in a blanket, ’cause we’ve got dramas for days that are just perfect for the holidays.

“My Love From The Star” 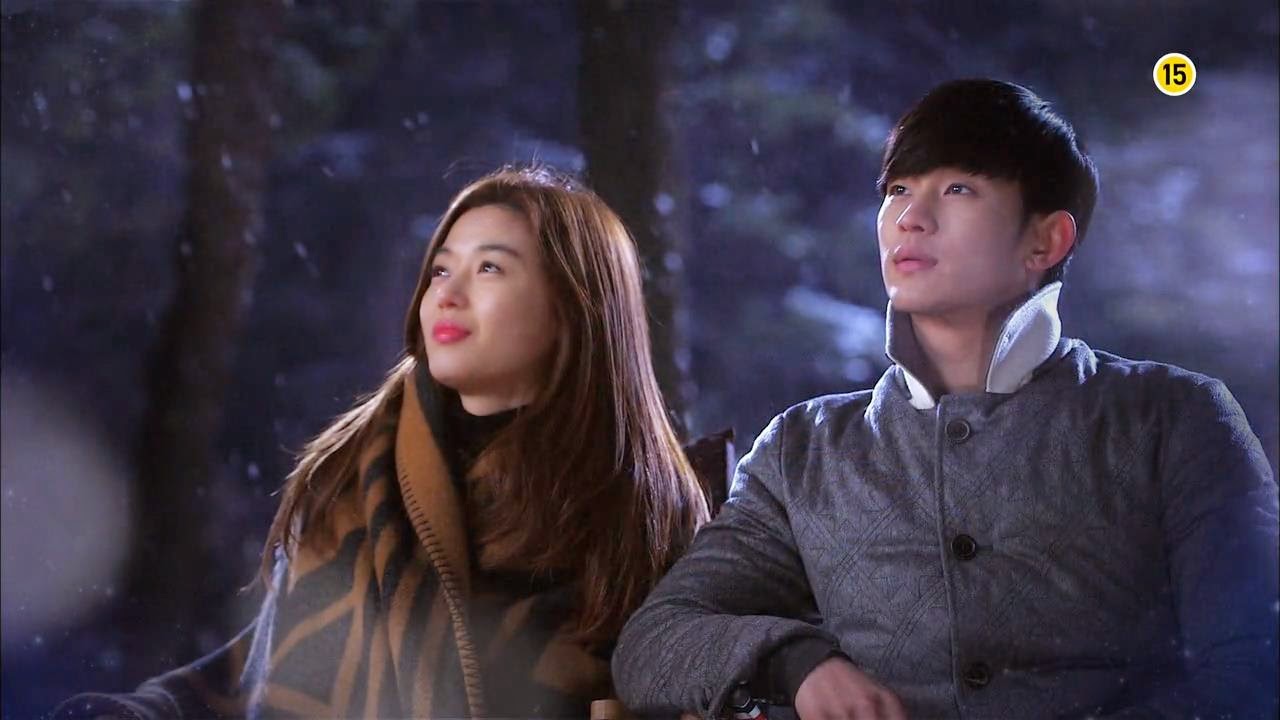 Frolicking in the snow, swoon-worthy kiss scenes, the build up, the tension! The centuries of love. “My Love From the Star” will warm your heart and give you shivers as you follow the will-they-won’t-they, obviously-they-will between Cheon Song Yi (played by Jun Ji Hyun) and Do Min Joon (played by Kim Soo Hyun). It’s a classic for a reason; who wouldn’t love a 400 year old alien with a snobbish attitude falling in love with an eccentric failing actress with a snobbish attitude? Among the glittering lights of stardom and the beautiful scenes of winter in Korea, this drama mixes a good dose of hilarity with all the wonderful K-drama ingredients you know and love. It’s definitely one to watch with your friends and some festive flavored popcorn. 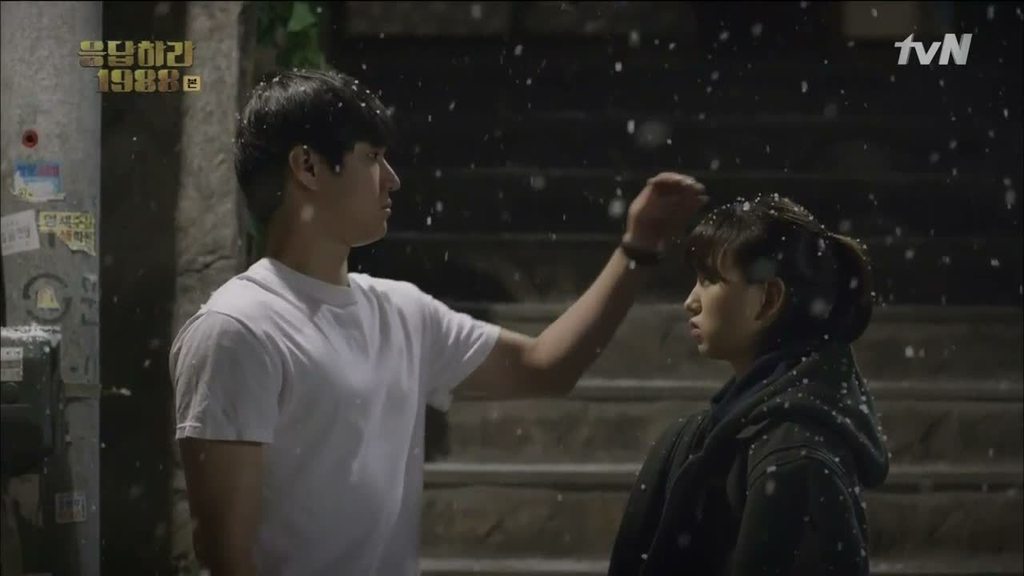 The holiday season is rife with family; they’re in the kitchen, they’re in the living room.. go upstairs to avoid them, and there they are too. “Reply 1988” has that same holiday feeling, surrounded by parents, aunts, uncles, neighbors and their parents, aunts, uncles, friends and friends of friends, but isn’t that what Christmas is all about? Spending time with the people who mean the most to you? This drama really captures that feeling perfectly, spanning years and following average kids in ’80s Seoul as they traverse the worlds of friendship, love, losing family and gaining them, growing up and letting go. It’s sad, poignant, hilarious, romantic, and all too familiar. Enjoy with your family this festive season! 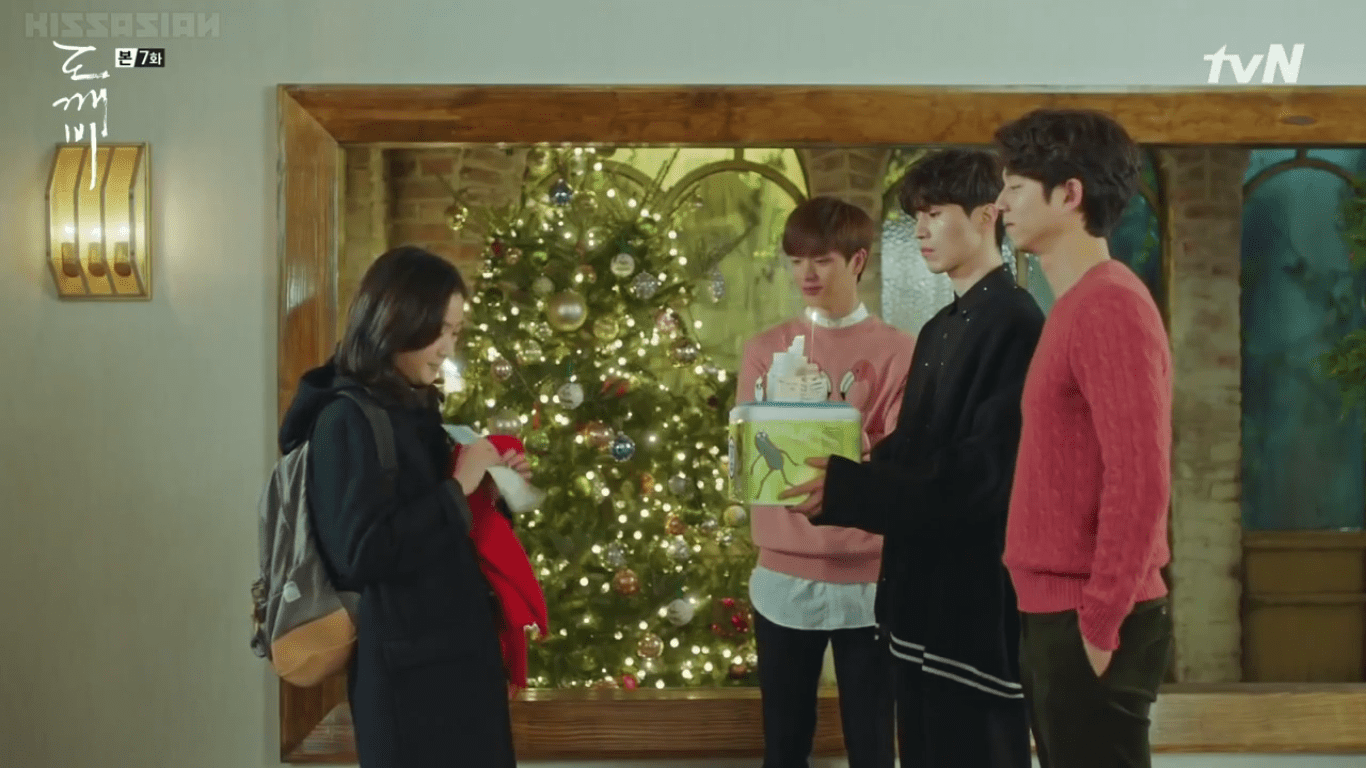 Visually, this drama is almost like an ode to the colder seasons with some of the most iconic moments blanketed in snow or under a curtain of streaming rain. Twinkling lights brighten up the corners of every scene, and the music score is twinkly to match.

The drama follows Kim Shin (played by Gong Yoo), a Goryeo military general turned goblin, as he accidentally falls into a house share with a grim reaper (played by Lee Dong Wook) and continues his centuries long search for his fated bride, a woman who can in true ‘Beauty and the Beast’ style, marry him and lift his curse, setting his soul free. The fated bride is none other than Kim Go Eun, playing the strong and adventurous Ji Eun Tak, a high school senior with the ability to see ghosts and living a Cinderella-esque existence with a mean stepmother and stepsister. It sounds comical, and it is, but there’s a ton of fantastic performances, gripping moments, and heart wrenching scenes that make this a great marathon for your holiday weekend. 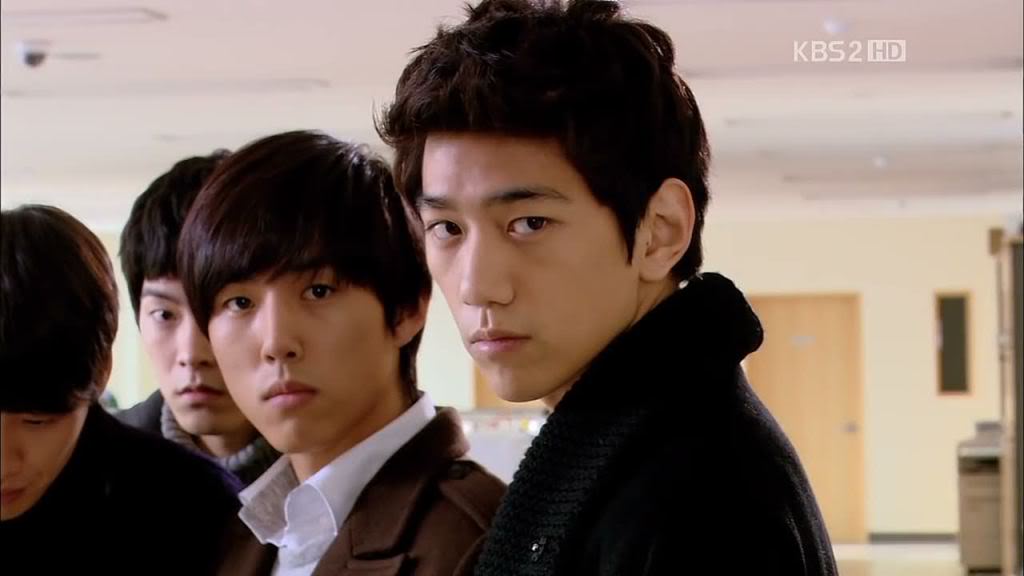 Alright, it’s not very Christmas-y, but maybe you’re just looking for great dramas to binge during the holiday season. If you haven’t seen this one, you’re in for a treat… also, it’s in the name! Some of your famous stars are here with fresh faces, just starting out in the industry and yet delivering some truly gripping performances. They make a great ensemble and at times make the frozen environment look warm and cozy in comparison to their ice cold behavior, a fantastic watch if you’re feeling like a Grinch this festive season.

One Christmas, seven students and one teacher stay behind at an isolated boarding school in the mountains of Gangwan-do province, home to the elite 1 percent of students in Korea. The mystery behind their reason to stay back is slowly revealed as a frightening antagonist targets them and hunts them down. 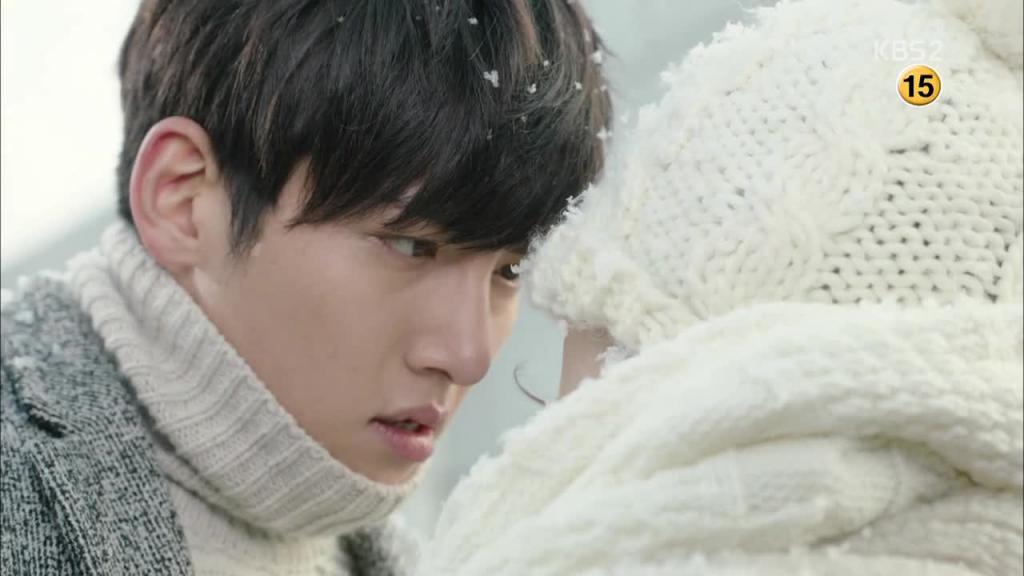 Something about the big fluffy scarves and woolly hats, chic long coats, and tons of romantically drifting snow makes “Healer” feel all festive and fun. Following the infamous ‘Healer’ (played by Ji Chang Wook), a courier who will do anything but kill for the right price, as he slowly unravels a mystery surrounding a woman he is hired to stalk, this drama has a lot going on. For a while you might find yourself rewatching episodes because… who was that guy again? or because the love scenes are serious couple goals and the chemistry between the leads is so adorable it warrants a second watch… or a third. The two leads are seemingly traversing their own stories alongside each other whilst dipping into each other’s business from time to time before colliding with warm and fuzzy results. 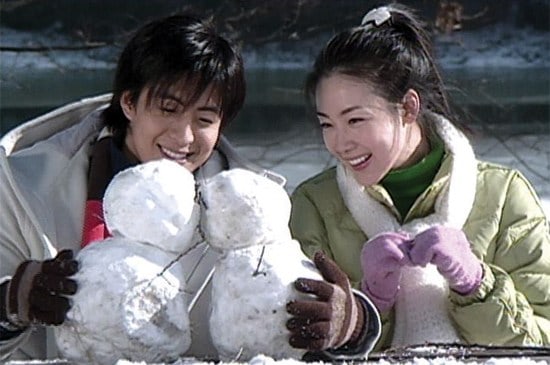 A classic and for good reason, “Winter Sonata” is everything K-drama is famous for: falling in love with a stranger on the bus when they fall asleep on your shoulder, tragic accidents, overbearing parents, amnesia, lost love, and romance, and conveniently for our purposes, it all happens under heaps of snow and fantastically awful outdated winter fashion.

Joon Sang (played by Bae Yong Joon) moves to a small rural town in South Korea and finds himself isolated and lonely until his beautiful classmate Yoo Jin (played by Choi Ji Woo) uses his shoulder as a pillow and he unsurprisingly falls in love. It’s all fun and games in the snow, making snowmen kiss, you know, as you do, until Joo Sang suffers a terrible accident and loses his memory, made even worse by his mom brainwashing him during his recovery and causing him to forget all about his girlfriend. A time jump into the future, both leads having strong ties with other partners and just a whole hoard of misunderstandings and missed connections are not nearly enough to keep these love birds apart.

“That Winter, The Wind Blows“ 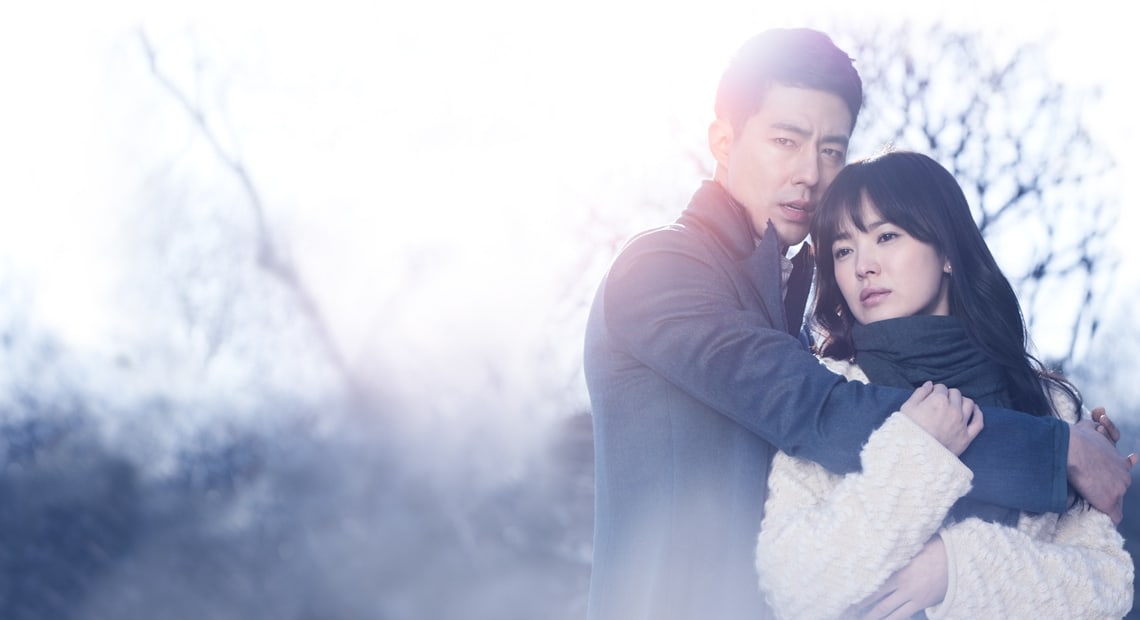 Just look at the drama, the tension, the feels! Also, all the snow and the winter and stuff. “That Winter, The Wind Blows” follows Oh Soo (played by Jo In Sung) as he essentially tries to scam a blind woman (played by Song Hye Kyo), pretending to be her brother who he knows has died, all the while kind of falling in love with her? But listen, it’s super romantic. This isn’t your average drama, the plot is a little messed up, and it doesn’t get much better as it progresses, but it’s wild, it’s intense, the performances are gripping, and the uncomfortable relationship between the two leads makes for avid viewing. There are also plenty of great scarves. 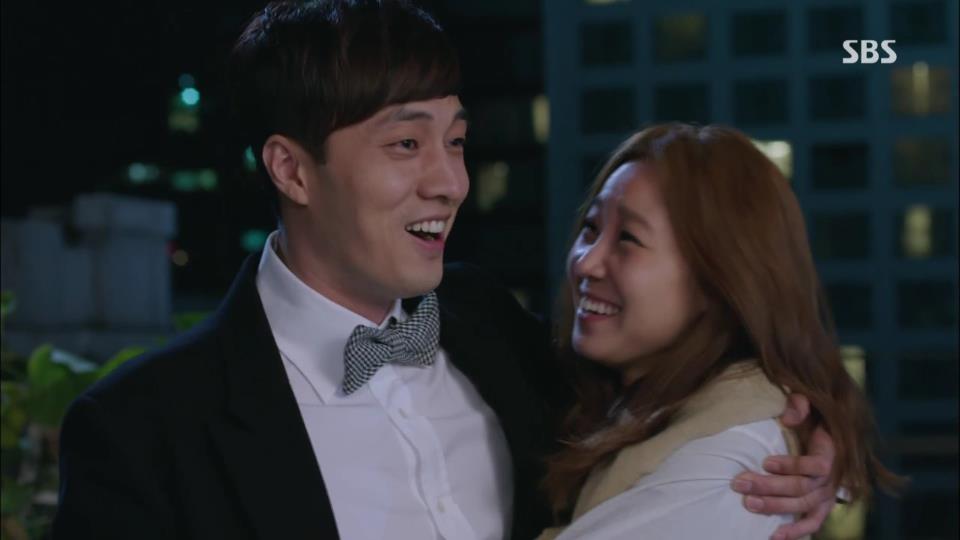 Alright, so there’s no mention of Christmas in “Master’s Sun.” Maybe not even any snow, but there’s something strangely festive about the drama. Maybe it’s the mega mall setting where most of us spend a large chunk of the holiday season buying gifts for all our loved ones, or maybe it’s the ghost element, Christmas being a favorite time to spread some chills. Whatever the case, this drama made the list because it makes us feel all warm and fuzzy inside, which is nice when it’s so cold outside yanno.

Following Tae Gong Sil (played by Gong Hyo Jin), an unfortunate woman with the ability to see and talk with ghosts, “Master’s Sun” is a romantic and hilarious drama with near unrivaled chemistry between the two leads. For some unexplained reason, Gong Sil can scare away ghosts by touching Joo Joong Won (played by So Ji Sub), and as Joong Won needs information from a ghost ex girlfriend, he suggests an exchange of services until he gets what he wants. Obviously, things don’t work out quite the way he planned, and Gong Sil becomes more of a burden than a help at times, but as her true character shines through, Joong Won can’t help but question his evolving motivations.

A big Christmas mug of hot chocolate would accompany this drama well. 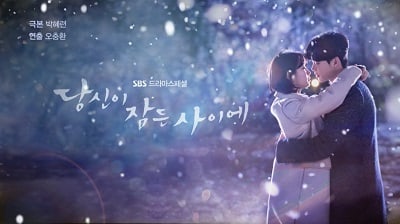 As if the leading combination of Suzy and Lee Jong Suk was not a big enough draw to watch this drama, the pure beauty of the cinematography should be. I mean look.

With a fantastic mix of crime, fantasy, and romance “While You Were Sleeping” follows a field reporter, a police officer, and a prosecutor as they struggle with the not-so-fun reality of foreseeing the future while they sleep. A dash of tragedy and drama makes this one a bit of a tear jerker, so it’s great for those dark nights with dark chocolate.

Did we miss any of your holiday favorites? Let us know in the comments below.

Master's Sun
Soompi Spotlight
My Love From the Star
Healer
Reply 1988
White Christmas
Winter Sonata
That Winter The Wind Blows
While You Were Sleeping
Goblin
How does this article make you feel?