We’ve hit the midway point of the quirky “Mama Fairy and the Woodcutter,” and as the overarching mystery is getting more and more intriguing, most of the characters are also taking a one-way ticket down to Heartbreak City.

This week’s entry will focus more on some predictions going forward as well as some of the burning questions we were left with after watching this week’s episodes.

Disclaimer: Given that I’ve not read the original webtoon, nor am I Nostradamus, the predictions are mostly just silly with a pinch of wishful thinking. Also, spoilers ahead!

What is the point of the magical trio?

This will be the last time I grumble about these three. First, I am beyond thankful that this week, they finally make it off the fishing boat and arrive at Yiwon University. BUT, if that’s all that there is, then what was the point of this side adventure in the first place? We had a glimmer of hope when Fairy Oh (Hwang Young Hee) met her husband look-alike, but nothing ever came of it, no new information about the winged dress was disclosed, and this particular story line is just dropped. So unfortunately, it’s just another week of relatively inconsequential scenes.

You and me both, brother!

Prediction: Because I refuse to believe these three can be that unimportant to the main story line, I’m hedging my bets on Shin Seon’s (Kim Min Kyu) last magical bean playing an important role in the story moving forward: The last bean is one that can reveal all of one’s past transgressions (which would also explain why Fairy Oh said it was dangerous). And while Master of the Northern Star gave it to Shin Seon as a way to teach him a lesson, it is eventually used on either Yi Hyun or Lee Ji to reveal a key part in their backstory.

How are Yi Hyun, Lee Ji, and the deer related?

This is one deliciously confusing mystery, and I can’t wait for more pieces of the puzzle to be revealed! These three characters are obviously interconnected, but the question is how? So far, we’ve gotten flashes of both Yi Hyun (Yoon Hyun Min) and the deer as Lee Ji. We’ve also seen Lee Ji trying to strangle Yi Hyun, asking him to exact his revenge; yet we also see the deer telling Yi Hyun to make amends for his sins. So could it be Yi Hyun isn’t Lee Ji’s incarnation, but rather she’s “haunting” him somehow, to rectify some past mistake on Yi Hyun’s behalf? Or is there more than one magical deer frolicking around?

Prediction: Honestly, there are so many contradicting pieces of information that it’s confusing (in a good way) and I can’t even begin to make a prediction. But here’s to hoping that the writers will be able to answer all these questions (and make actual sense), instead of hurriedly wrapping up the story and leaving us with more burning questions.

This is a thought that will undoubtedly bring shivers to all Geum (Seo Ji Hoon) lovers. After all, our Geum is the sweetest, kindest person around who enjoys snacking on clouds! No way would he ever lose that charming child-like innocence of his, would he?

And yet, that final shot from this week’s episodes – the one where he stumbles upon Yi Hyun and Ok Nam (Moon Chae Won) kissing – is so foreboding. The mixture of confusion, betrayal, and heartbreak is written all over his face, and you can’t help but wonder if the darkness engulfing him is a hint of things to come. This thought is more worrying given that we know something happened between Bausae and Lee Ji in the fairy realm, where Bausae allegedly betrayed Lee Ji.

Prediction: Given that Lee Ji is probably a biased source/narrator, it’s more probable that Bausae “betrayed” Lee Ji out of a sense of justice or necessity. That being said, I’m guessing Geum might lose his way for a bit, but end the series as his old, sweet, Geum-self. (I’m also not averse to Geum with a bit more of an edge, just sayin’).

When will Jeom Soon realize Kyung Sul is a creep?

With most of the story this week happening away from the university and their homes, we barely see much of Jeom Soon (Kang Mina). We do see her running off to hang out with Kyung Sul, but their interactions are cut short when Jeom Soon discovers the magical trio on campus. Despite having lived many lives, it’s entirely understandable that Jeom Soon, as a young girl, would be enamored with this cute guy who gives her attention, especially since she supposedly remained single in her first life. She’s just a girl looking for love, but unfortunately, Kyung Sul is just not the right guy for her.

Prediction: Kyung Sul eventually finds out about the magic of it all, films them, and threatens to release an exposé. Around the same time, Jeom Dol will also finally hatch, and being the loving brother, will put the fear of God in Kyung Sul for ever trying to take advantage of his baby sister. Or will Jeom Dol hatch as a baby? In that case, oh well.

Will Ok Nam ever take charge?

Ok Nam’s drunk scenes were thoroughly enjoyable to watch this week. While Moon Chae Won herself is a captivating actress, it does feel as if Ok Nam so far has been a somewhat bland character. She mostly goes along with whatever is happening, and is more reactionary than instigator-y. But this week, we finally get to see some of her spunk, as she goes toe-to-toe with Dr. Lee (Jun Soo Jin), and even lands some really good quips. This spark in her adds depth to her character, and is really adorable to boot!

Also, as romantic as “waiting for her husband for 699 years” is, wouldn’t it be even more romantic for Ok Nam to choose whoever her heart wants now, instead of pining for memories lost? Especially since no one even remembers who the husband is? 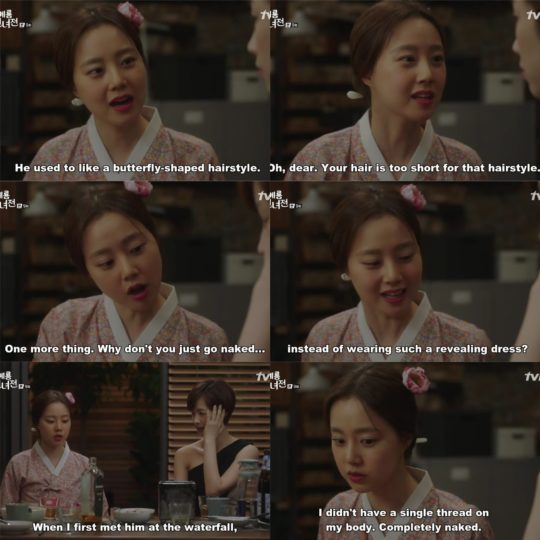 Prediction: Ok Nam’s original winged dress is found, but she gives it to Fairy Oh, who never finds hers. In the finale, Ok Nam chooses to be reincarnated into a human, where she and her true love* find each other in a different lifetime and fall in love again — this time with just as many flowery prints, but decidedly less vengeful fairies around.

*I’m really hoping she ends up with Geum, because the chemistry between these two is just… wow! #TeamGeum

Catch the latest episode of “Mama Fairy and the Woodcutter”:

What are some of the burning questions you have after watching Episodes 9-10? And lay down some of your own predictions in the comments section below!

Currently watching: “Mama Fairy and the Woodcutter“
All-time favorite: “Kill Me Heal Me”
Looking forward to: “Memories of the Alhambra“