On December 17, Good Data Corporation released a list of the most buzzworthy dramas and cast members from December 10 to December 16.

The data was compiled from an analysis of responses on 31 dramas through news articles, blog posts, online communities, social media, and video clip view counts.

JTBC’s “SKY Castle” ranked No. 1, pushing tvN’s “Encounter” into second place after being No. 1 for three weeks in a row. “SKY Castle” has shown a continuous incline for three weeks after its premiere. Kim Bo Ra’s role of a student in poverty is also gaining a lot of attention as she made it into the 10th place slot for the list of top 10 buzzworthy actors. The diverse characters with strong individuality in “SKY Castle” are gaining a lot of attention as 15 cast members placed within the top 100.

Although “Encounter” ranked second overall, Park Bo Gum and Song Hye Kyo have ranked first and second, respectively, for three weeks in a row on the top buzzworthy actors list. Hyun Bin and Park Shin Hye from “Memories of the Alhambra” ranked third and sixth, respectively. Jang Nara ranked No. 4 after her refreshing acting gained attention in SBS’s “The Last Empress.” Yoo Seung Ho came in fifth place with Jo Bo Ah in seventh after the premiere of “My Strange Hero,” which has also gained a lot of attention from the public. 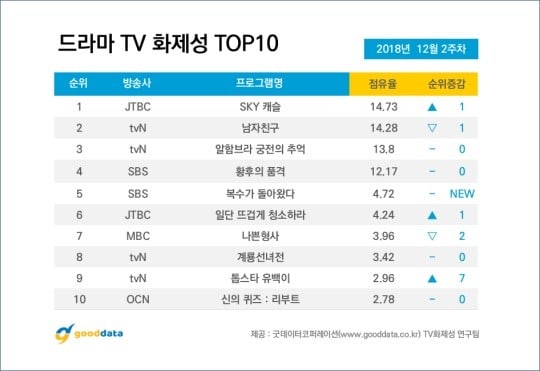 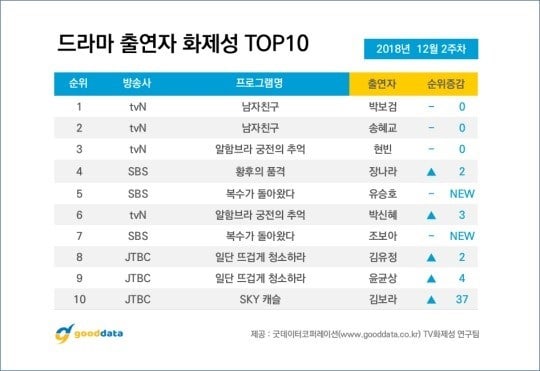