On December 20, the Korea Broadcast Advertising Corporation (KOBACO) revealed the results for their 2018 consumer behavior market survey. The survey revealed the 10 advertisement models most beloved by consumers this year.

Park Seo Joon topped the list as his popularity continued to skyrocket in 2018 through appearances in tvN variety show “Youn’s Kitchen 2” and tvN drama “What’s Wrong With Secretary Kim?” He has appeared in over 20 commercials (TV, paper, and online) since January, and those are only the commercials that have aired thus far. The actor has signed a contract for a clothing commercial in the Philippines and is active as a global model in Vietnam and China as well.

One of the reasons that consumers listed for his popularity is his image as a “healthy youth.” Through “Youn’s Kitchen 2,” he showed his maturity and other various charms, while his projects like “Midnight Runners,” “Fight My Way,” and “What’s Wrong With Secretary Kim?” solidified his status as a talented actor. His star quality translates not only to women but to young men as well.

A source from the advertising industry stated, “Park Seo Joon’s special quality is his friendly and healthy image. It plays a huge role in adding to the value of the brand. He is active in more ways than just on the big and small screens, which makes him one of the top choices for commercials.”

Here are the top 10 results from the market survey: 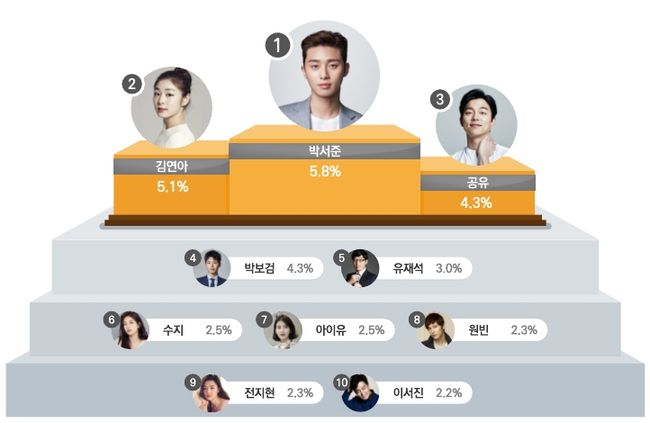