Han Ji Min discussed the recognition she has received after starring in the film “Miss Baek.”

On December 20, the actress appeared on JTBC’s “Newsroom” and talked about her latest film with renown anchor Sohn Suk Hee. About winning five awards this year, she said, “I couldn’t even imagine it in my dreams. I think that luck has to be on your side for awards. I think I had good luck.”

Han Ji Min continued with a smile, “I actually didn’t know that there were so many awards shows, and I’m thankful I was able to receive them.” The actress won the Best Actress award at the 4th London East Asia Film Festival, 38th Korean Korean Association of Film Critics Awards, 39th Blue Dragon Film Awards, 19th Women in Film Korea Festival, and 5th Korean Film Producers Association Awards for her performance in the film “Miss Baek.”

Sohn Suk Hee said, “This was not what they call a mainstream movie. It was low-budget and by a rookie director. It has a female lead. It’s not something that’s strange, but it became a hot topic in light of the social conditions.” Han Ji Min replied, “There were many people who supported the film, so it became more of a success than expected. These days [many films] surpass 10 million moviegoers, so there are probably many people who haven’t seen it.”

She continued, “The reason I choose a project is different each time, but when I first read the scenario for ‘Miss Baek,’ it felt more like I was watching an abusive scene taking place in a horrible family somewhere instead of feeling like a movie. As soon as I read it, I thought that there might be difficulties and that it might be taking on a challenge if I took this role. But as an adult living in this society, I felt sorry to these people, so I wanted to work on this film. Since it was a low-budget commercial film, there were difficulties with getting staff members, but they also worked on it with the same mindset as me.” 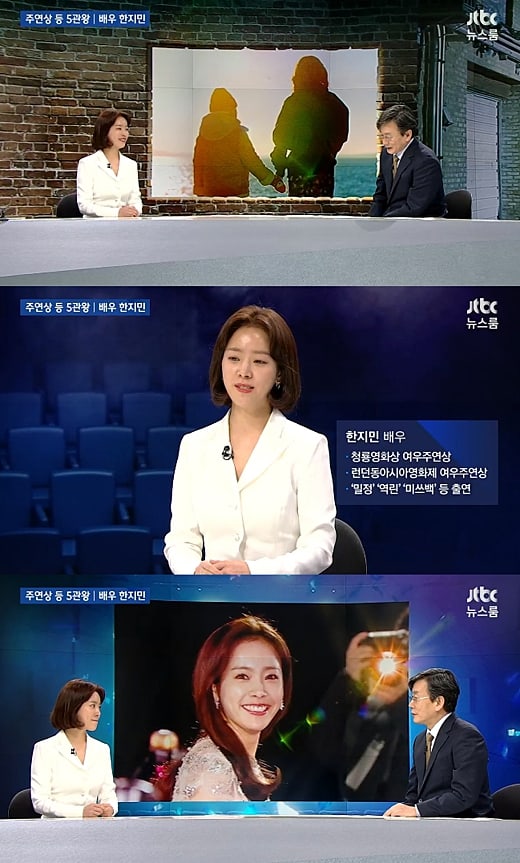 About child actress Kim Si Ah whom she worked with in “Miss Baek,” Han Ji Min said, “There were many scenes that were emotionally difficult. The director also wanted someone who had never acted before and wanted to find someone who didn’t stick out when you first saw them and looked like someone who really exists in this world. Despite her young age, actress Kim Si Ah did a good job acting as she put in a lot of effort.”

Han Ji Min also discussed the variety in her filmography. “When I was a rookie, I was just grateful for an opportunity and worked hard no matter what,” said the actress. “At some point, I felt really embarrassed when I felt like my acting was the same despite being different projects. After that, I tried to look for new things. I think that every actor has a yearning for a new character. Because of the characteristics of dramas, the female characters are similar. So I usually decide to try to do something different in films whether it’s big or small.”

She continued, “After receiving many awards, many people are becoming curious about my follow-up project and asking what all of this means. I said this during my award acceptance speech as well, but I hope that this award doesn’t feel too heavy for me.”

She added, “Just like how I’ve done things slowly until now, I think I’ll continue doing so without many changes. Kim Hye Soo sent me a text message the next day and said that she hoped that my acting career would continue one step at a time, whether on a rose flower path or a thorn-ridden path. There will probably be difficult moments, but the support I received through ‘Miss Baek’ will give me courage.”

Han Ji Min will next appear in JTBC’s new drama “Dazzling” which began filming in October and will air in 2019.

Newsroom
Han Ji Min
How does this article make you feel?