“The Crowned Clown” is a remake of the popular 2012 film “Masquerade” (also known as “Gwanghae: The Man Who Became King”). The upcoming historical drama will tell the story of a king who, in order to avoid enemies who want to kill him, brings a clown that looks identical to him into the palace to serve as his double. Yeo Jin Goo will take on the roles of both the king Lee Heon, whose life is in danger, and the clown Ha Seon, who will pretend to be the king.

In the newly unveiled behind-the-scenes stills, Yeo Jin Goo is full of playfulness as he toys with the camera and smiles at the crew. In two of the photos, the actor impishly pokes his head out from behind a wall. Although he wears a soft smile, his eyes are full of mischief. Other photos show Yeo Jin Goo brightening the set with his vibrant smile and laughter. 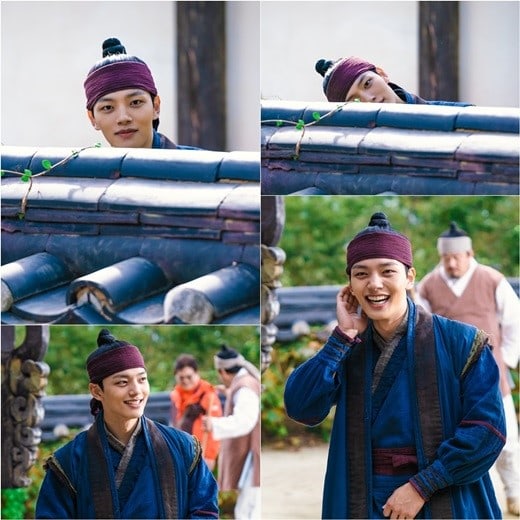 During the press conference for the drama, Yeo Jin Goo remarked, “My bright personality is similar to that of Ha Seon, the clown. We share many similarities.”

The producers of “The Crowned Clown” commented, “Yeo Jin Goo always arrives on set with a big smile, emitting bright energy. He always gives strength to the crew and his fellow actors by never losing his smile.”

They added, “Viewers will be captivated by Yeo Jin Goo’s two completely opposite charms as he simultaneously plays both a king in danger and a free-spirited clown. Please look forward to his performance.”

“The Crowned Clown” airs its first episode on January 7 at 9:30 p.m. KST and will be available with English subtitles on Viki. Check out the teaser here!