After the big announcement about Big Hit Entertainment’s new boy group was made on January 11 at midnight KST, the conversation has conquered Twitter’s worldwide trends!

Included in the announcement was the official confirmation that the group will be called TXT (Tomorrow x Together), as well as the first look at member Yeonjun with an introduction film and teaser photos.

Right after the release, Yeonjun’s name shot up to the top of Twitter’s worldwide trends, and it was soon followed in the top 10 by #TOMORROW_X_TOGETHER and #BigHit, with the trends later taking the top three spots. 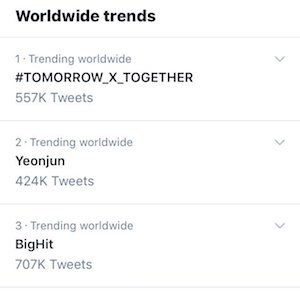 Tweets have included theories about the group and the results of detective work, reactions to member Yeonjun, and of course lots of hilarious memes!

See some of the tweets below!

wait yall realize that if the morse code at the end of yeonjun's video spelled "dreaming", then it's the exact opposite of bts' debut "no more dream" im–

bighit: so lets give hint by having their names and form it into a word,,,they can't guess it

armys: oKaY sO YOU&ME so Y means YeOnjun and O,U,M,E are remaining members-

Yeonjun only the first member and already out here stealing hearts ?? #tomorrow_x_together pic.twitter.com/UIFN25wXRL

i wonder if they got the pick the concept for their introduction film.. like hi my name is yeonjun I like toys, online games, karaoke and eating #TOMORROW_X_TOGETHER #TXT pic.twitter.com/bo36UttPhk

b but the fact that the members of TxT will be younger than me, send #TOMORROW_X_TOGETHER pic.twitter.com/V898pST10K

Are you looking forward to TXT’s debut?