On the January 16 broadcast of MBC’s “Radio Star,” Block B’s P.O appeared as a guest.

The show was celebrating its 600th episode, and P.O said, “There’s something I’ve always wanted to do.” After hesitating a bit, P.O suddenly kissed Kim Gura on the cheek, stunning the MC and throwing the set into fits of laughter. Returning to his seat, P.O said, satisfied, “Whenever I see him, his cheeks are always ‘shy.'”

Kim Gura commented that P.O, as an only child, seems to often express his affection in a physical way. He said, “It’s good to express your feelings. It’s a good thing. Thank you.” 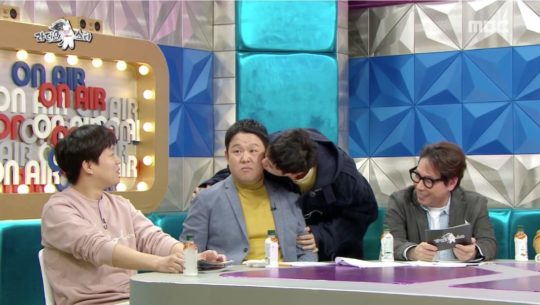 P.O also talked about Zico opening his new agency, KOZ Entertainment. “It’s just that his agency is different; Block B is still seven members. Because we’re going to be enlisting one by one, it’s going to be difficult to promote as a group for the time being.”

P.O clarified that his Instagram post following the news of Zico leaving Seven Seasons was just a joke, and that he wasn’t trying to target Zico with it.

Block B
P.O
Radio Star
How does this article make you feel?