Ha Sung Woon raised anticipation for his upcoming album and other activities!

Ha Sung Woon is a member of HOTSHOT who joined Wanna One after appearing on “Produce 101 Season 2.” The project group’s contract ended on December 31, with their final concert scheduled for the end of January. Earlier this month, Star Crew Entertainment confirmed that Ha Sung Woon will be releasing an solo album in February. 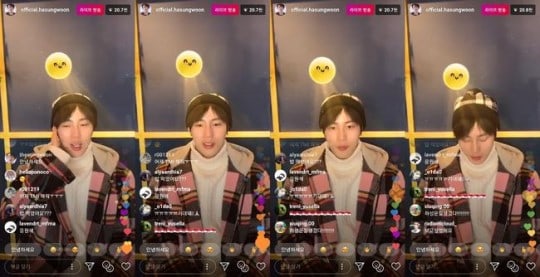 He also shared that he’s currently busy preparing for his album and on a diet. Ha Sung Woon said, “I recently went on a diet, so I think my photos are coming out really well these days and it makes me happy,” and “I’m eating diet shakes right now. But I’ll be filming mukbangs [eating broadcasts] from February.” He added that he’s about 60 percent done with his upcoming solo album.

Over 20,000 people tuned in to see Ha Sung Woon’s live broadcast. As a thank you, he sincerely sang Yoon Hyun Sang’s “Always Be With You,” and said, “I will work harder to prepare everything for you.”

HOTSHOT
Wanna One
Ha Sung Woon
How does this article make you feel?