The long-awaited “Touch Your Heart” has finally graced our airways, and as expected, premiered to strong ratings across the board. It’s every bit the rom-com it’s billed to be, with hilarious moments peppered throughout.

For those who aren’t in the know, “Touch Your Heart” reunites “Goblin” alumni Lee Dong Wook and Yoo In Na as lawyer and actress respectively. Oh Yoon Seo (Yoo In Na) is an actress who heads to Always Law Firm for character study to land an acting job. She is assigned to work as Kwon Jung Rok’s (Lee Dong Wook) secretary, and that is where their relationship begins.

Things are not off to a good start.

As a nod to Lee Dong Wook and Yoo In Na’s history together, here are some things about the premiere which we found either “Sunny” or “Grim”:

Warning: Spoilers for the premiere episodes ahead!

Yoon Seo is an absolutely hilarious character that could easily be overplayed if not for the natural charm of Yoo In Na. She plays Yoon Seo’s diva-ish and narcissistic tendencies with such conviction which completely sells the comedy of it all. During the scene where she uses aegyo to get the script writer to give her a chance is a prime example, as she fully commits to the “twitching,” and the scene goes from silly, to awkward, to plain hilarious.

But even under all the confidence and pompousness, Yoon Seo’s vulnerability and innocence — her idea of revenge is to be the best secretary ever — still peeks through, and Yoo In Na undoubtedly plays a big part in carving out this three-dimensional character.

The Yoon Seo we see today is sunny and optimistic, even though she has more than enough reasons to be bitter and resentful. She was once a top Hallyu actress who has since fallen from grace due to a drug scandal and an alleged affair with a third-generation chaebol. Even though she was eventually found to be not guilty of the drug claims, the public opinion of her was already in the dumps, and thus her involuntary hiatus.

Yet why is a sunny and strong personality placed under the grim category? Well, it’s the reason behind it that is saddening. In the second episode, Yoon Seo barely flinches when she sees a vendor taking down her posters to swap in the “newer model,” and Jung Rok commends her on her strong mentality. She explains it’s due to being in the entertainment world for so many years, having learned to steel herself against all the criticisms and attacks. And it’s this harsh reality of being in the public eye that is grim, and you just can’t help but feel for her, as well as the celebrities in the real entertainment world. 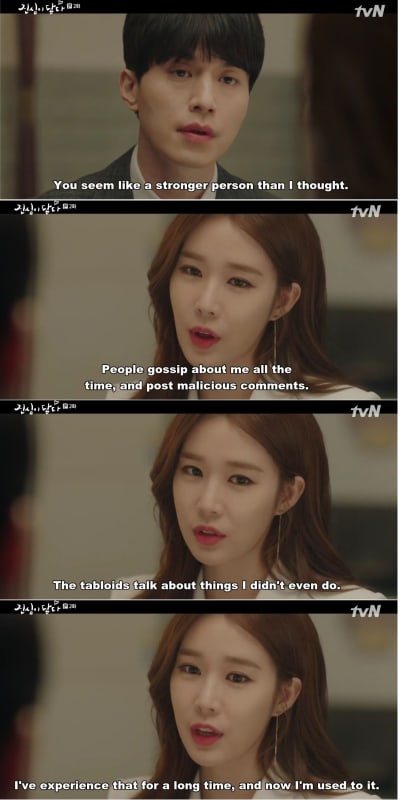 We haven’t seen much of Jung Rok’s personality in these two episodes, other than learning that A) he’s a star lawyer of the law firm, and B) he has a grim expression plastered on his face 90 percent of the time. I don’t think we’ve seen him smile once in these two episodes, but he’s not exactly your typical jerk either. He has shown that he cares by taking care of Yoon Seo’s meals and intervening during the car accident, so it’s less that he’s unfeeling, and more that he just doesn’t have a reason to break out a smile. *cue Yoon Seo!*

We are also briefly introduced to Kim Se Won (Lee Sang Woo), a friend who appears to have been a rival-in-love. Hopefully this relationship will turn out more bromance than… grim-ance.

Sunny: All the colleagues

From Yoon Seo’s side, we have a very supportive management team — especially with the super sweet manager oppa (Oh Eui Sik)— and it’s refreshing to see an entertainment agency that truly cares for their artist. The lawyers and staff at Always Law Firm are also an entertaining bunch, from timid yet quick-witted civil defense attorney Dan Moon Hee (Park Kyung Hye; also a “Goblin” alum) to veeery filial bachelor and divorce lawyer Choi Yoon Hyuk (Shim Hyung Tak). Collectively, these characters are certainly making this drama even sunnier!

“Touch Your Heart” knows the genre well, and the production team is having fun fully leaning into the concept, starting with a hilarious “Descendants of the Sun” parody, complete with the original “Always” track backing the scene.

Yoon Seo re-enacting commercials with the products in Jung Rok’s office is similarly hilarious (and so well done!), especially when they smash cut to Jung Rok’s expressionless face. And for the fans of “Goblin,” Yoo In Na even does Sunny’s famous hair flip, and the favorite sandwich shop for supernatural beings, Subway, makes an appearance too! It’s all silly and ridiculous but in the best way!

Sunny: The chemistry all around

Lee Dong Wook and Yoo In Na have proven their electrifying chemistry in “Goblin,” where we were just as invested in their coupling as we were the main couple’s. Their chemistry is just as profound this time round in “Touch Your Heart,” and we’re just as easily drawn in. But it’s not just the chemistry between our leads that is impressive, but the cast all around. And it’s this fun, high energy chemistry that allows both the comedic and sincere moments to land, and has us yearning for more!

Have you started watching “Touch Your Heart”? And if so, which of the fake ads is your favorite (Mine is the couch). Share your comments with us below!

Belinda_C is really enjoying this drama! It’s been a while since she’s watched a fun rom-com! She’s also super proud of how well SEVENTEEN is doing this comeback! Come celebrate their wins with her on Twitter!