Park Ji Hoon has taken his first step towards fans as a solo artist!

On February 9, he kicked off his Asia fan meeting tour “First Edition” at Kyung Hee University’s Grand Peace Palace in Seoul. Anticipation was high for the event, with the total of about 7,000 tickets for the two showtimes having sold out in one minute.

The crowd erupted into cheers as Park Ji Hoon started the show with a powerful and sleek dance cover of Ed Sheeran’s “Shape of You.” 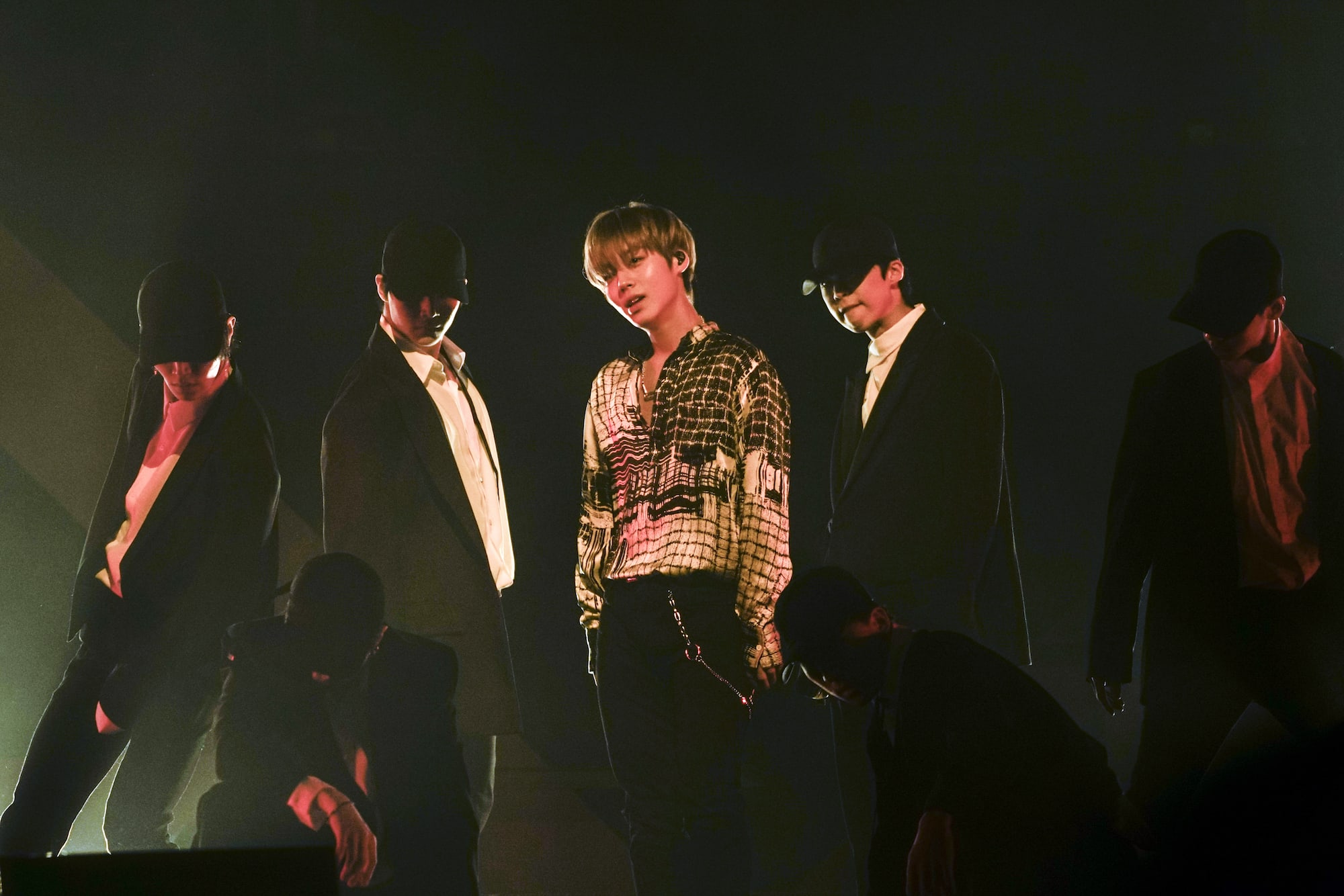 For the first time, Park Ji Hoon then greeted fans as May, his official fan club name that was recently determined. Regarding the fan meeting title “First Edition,” he explained, “Like how a magazine or album has a ‘first edition,’ it means that this is my first and my beginning.”

Led by MC Park Kyung Rim, he then took time to answer funny quiz questions that fans had come up with. One of the questions showed four images and asked which ones are not edited, and included was a photo of him bearing his abs at Wanna One’s final concert.

When Park Kyung Rim asked about how much effort was put into his abs, he shared, “I really tried hard. I didn’t drink water starting the day before. I ran after the previous day’s concert and didn’t drink water until after my performance at the next concert,” and added that he worked out a lot in preparation.

Fans asked to see his abs again, and he promised to do so after improving them further. “I can’t tell you the exact date because then it would be no fun.” 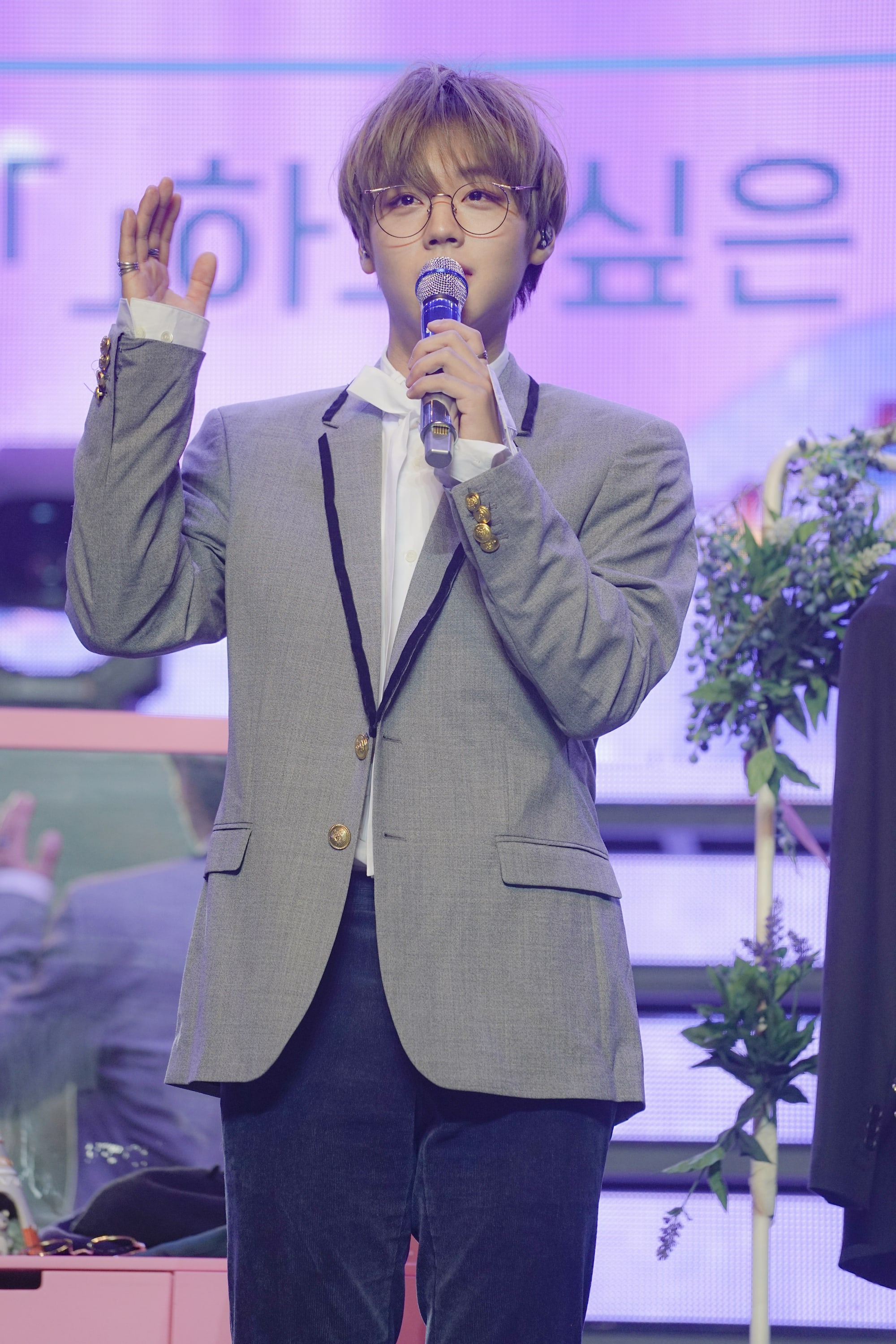 Through the next segment “Save Edition,” Park Ji Hoon reminisced about memorable moments from the past and reenacted them with the help of different outfits and accessories.

About his famous wink from “Produce 101 Season 2,” he commented, “I felt like I had to do it to survive,” and said he had no idea that it would cause so much buzz. 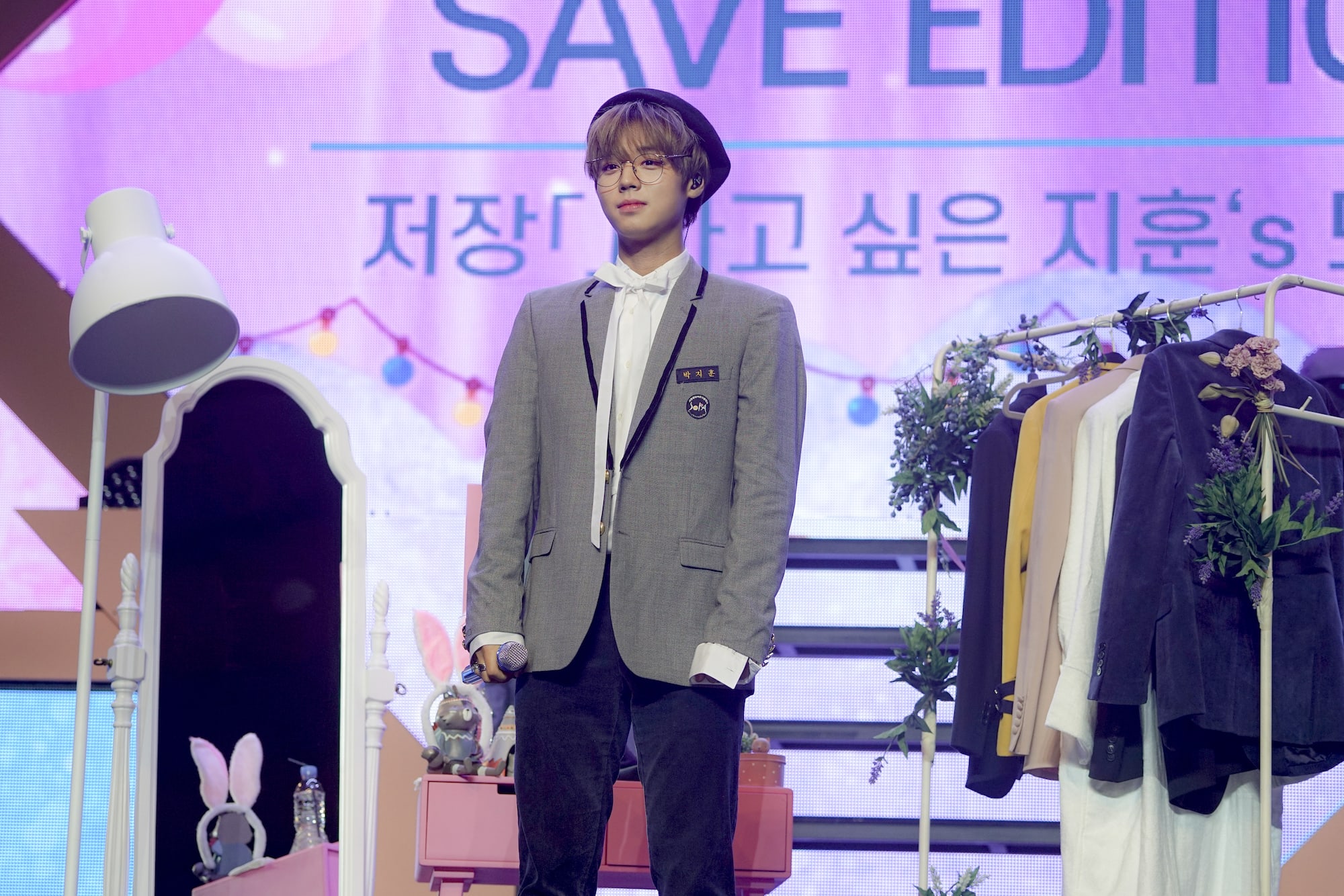 Park Ji Hoon then continued with performances of Wanna One’s “Wanna,” which he revealed to be one of his favorites of the group’s tracks, as well as the unit track “11.” Despite it being his first time performing the songs alone, he filled the stage with his great stage presence.

Afterwards, he showcased the first performance of “Young20,” a brand new track produced for him by Lee Dae Hwi. Park Ji Hoon also participated in writing the lyrics.

On what it was like working with Lee Dae Hwi in the studio, he shared, “Dae Hwi is a perfectionist and knows what he wants. He keeps on going until he is completely satisfied with the results.” 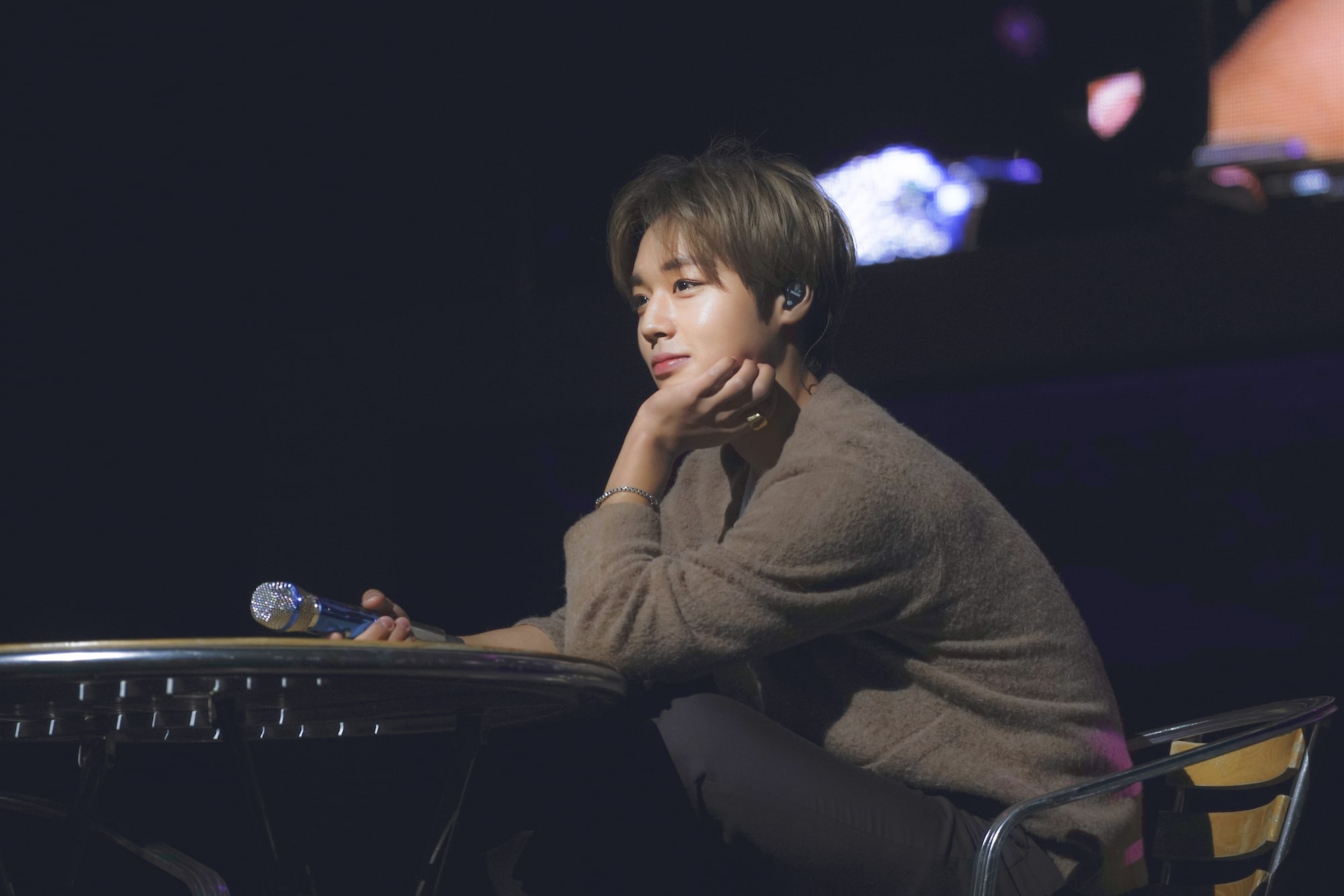 Fellow Wanna One members Yoon Ji Sung, Bae Jin Young, and Kim Jae Hwan then made a surprise appearance. The three of them as well as Park Ji Hoon were coincidentally all wearing black, but they insisted that they had not planned it. Park Ji Hoon commented, “It is because our hearts are always one.”

The three guests shared their insights on Park Ji Hoon’s charms and concluded with warm messages for him.

Bae Jin Young started, “Always be happy with May, and I hope you can be like a vitamin that always makes May happy. I enjoyed always practicing and fooling around with you. Don’t cry because Mays are by your side now.”

Yoon Ji Sung continued, “I am very thankful to be a part of this special and happy day and am honored to be at this joyful event with May. With everything that Ji Hoon is starting from now on, he will feel a lot of burden, will need a lot of courage, and will have difficulties. I think Ji Hoon will gain a lot of strength and work hard if May walks with Ji Hoon every step of the way. There aren’t many people who think of fans as much as Ji Hoon does. I hope you will have good times with Ji Hoon for a long, long time.”

Kim Jae Hwan began his message by looking around at the sold-out audience and remarking, “Ji Hoon, you are really incredible. After our final concert, I took a break so it even felt awkward to put on makeup today. Coming here and seeing May today, it’s a different kind of feeling, and it’s cool.” He glanced at the full crowd again and added, “This is incredible. You are an incredible kid. There are so many people,” drawing laughter from fans.

Kim Jae Hwan concluded, “My birthday is also in May,” and Bae Jin Young raised his hand to share that his birthday is in May, as well, and said, “I will be a May.”

When Yoon Ji Sung was asked about his birthday by the MC, he responded, “Do I have to change my birth month? It is in March.”

The three then hugged Park Ji Hoon and waved goodbye to fans as they walked off stage.

Park Ji Hoon went on to perform Wanna One’s “Hide and Seek,” explaining that fans had wanted to hear him sing a ballad.

As the show came to a close, he shared his future plans. “I plan on showing diverse sides of myself. I am taking acting lessons, and I am preparing to showcase different genres.”

Park Ji Hoon then wrapped up the fan meeting with an impressive cover of Taemin’s “Press Your Number.” 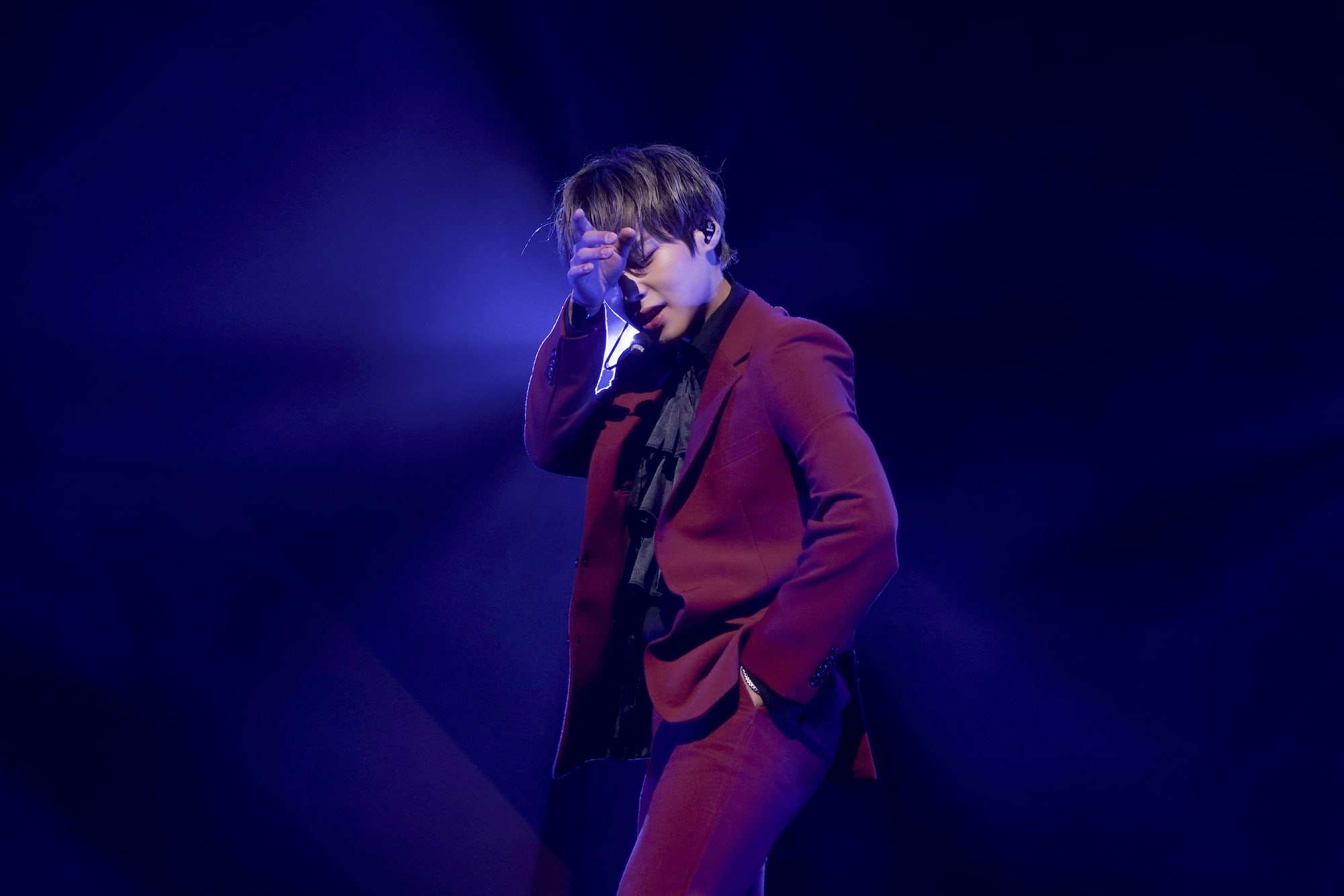 Following the fan meeting, Park Ji Hoon uploaded selfies taken during the event and wrote, “I love you, May.”

Yoon Ji Sung also posted photos taken with Bae Jin Young and Kim Jae Hwan backstage at the fan meeting along with the caption, “The same as usual no matter when we meet.”