Both Taemin and Wheesung appeared as guests on the February 16 broadcast of the tvN variety show. At the beginning of the episode, MC Boom revealed that unlike Minho, who requested that he not be seated next to Key during his appearance on the show, Taemin had asked to be seated next to Key.

Taemin explained, “I always follow Key’s opinion. For example, even during our team meetings, I go along with Key’s opinions as much I can. Our tastes in food are similar, so I tend to follow his decisions about food as well.”

He continued, “I realized at the beginning of my debut that I should follow whatever he says, but the [SHINee] members who haven’t yet made this realization always lose [to Key].” 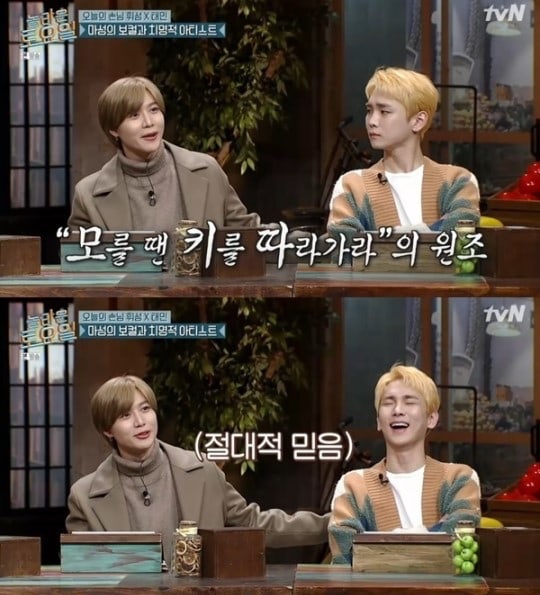 Girl’s Day’s Hyeri, who has a sibling-like bickering relationship with Key on the show, responded by jokingly complaining about frequently losing to him in arguments. “I usually win [arguments elsewhere],” she protested, cracking up the other cast members.

Meanwhile, Taemin recently made a solo comeback with the new title track “WANT.” Check out the music video here!

SHINee
Key
Taemin
Amazing Saturday
How does this article make you feel?