As Yoon Seo (Yoo In Na) continues to grow more and more infatuated with Jung Rok (Lee Dong Wook), he (very) slowly sheds his cluelessness and starts taking steps towards our heroine. The stark contrast between their personalities and approach to the relationship gives us a lot of wonderfully cute and hilariously awkward moments. Here’s a look at seven of these moments from this week’s episodes of “Touch Your Heart“:

Warning: Spoilers for Episodes 5 and 6 ahead!

The spin of using tangerines to play this classic “He likes me; He likes me not” game is cute. It’s definitely something I can see Yoon Seo and Attorney Dan (Park Kyung Hye) doing, as both of them have quite the teenage-girl-in-love tendencies. And when Yoon Seo realizes she’s going to end up on “He likes me not,” she quickly gulps multiple slices at once, just so she can end on the desired result.

2. When Chansung is savage

Poor Attorney Dan… It doesn’t seem like she can catch a break in her love life, as her infatuation with delivery man Chansung (2PM’s Chansung) comes to a crushing end, thanks to his stone-walling replies.

And for the final blow:

3. When heart-shaped post-its take over the office

After Yoon Seo adds a touch of pink to both their office spaces, we are treated to an adorably sweet sequence of trading pink heart-shaped post-its. And even though Yoon Seo definitely reads too much into it, the little smile we see from Jung Rok is pretty telling too. He’s enjoying these little moments without realizing it, and we can’t help but want to shake some sense into him!

The kicker comes later when Jung Rok supposedly abandons Yoon Seo during lunch, and she declares him no longer qualified to use those post-its while giving him the most accusatory glare.

4. When Jung Rok is clueless

When Yoon Seo again reads too much into Jung Rok’s answer about his movie preferences, she becomes outwardly annoyed with him. However, Jung Rok being, well Jung Rok, just can’t figure out why. He shows up at the firm’s after-work gathering, even after saying he wasn’t going to go, much to the surprise of everyone.

“I came to see Jin Shim (Yoon Seo’s birth name).”
*cue flustered Yoon Seo and colleagues*
“I came to ask her why she’s angry at me.”

Yoon Seo hurriedly makes up a reason as to why she is mad (saying she was hungry), and Jung Rok happily accepts the reason, very satisfied with himself for “resolving” the “misunderstanding.” Yoon Seo looks as if she’s about to murder him for his cluelessness, and honestly, who can blame her? 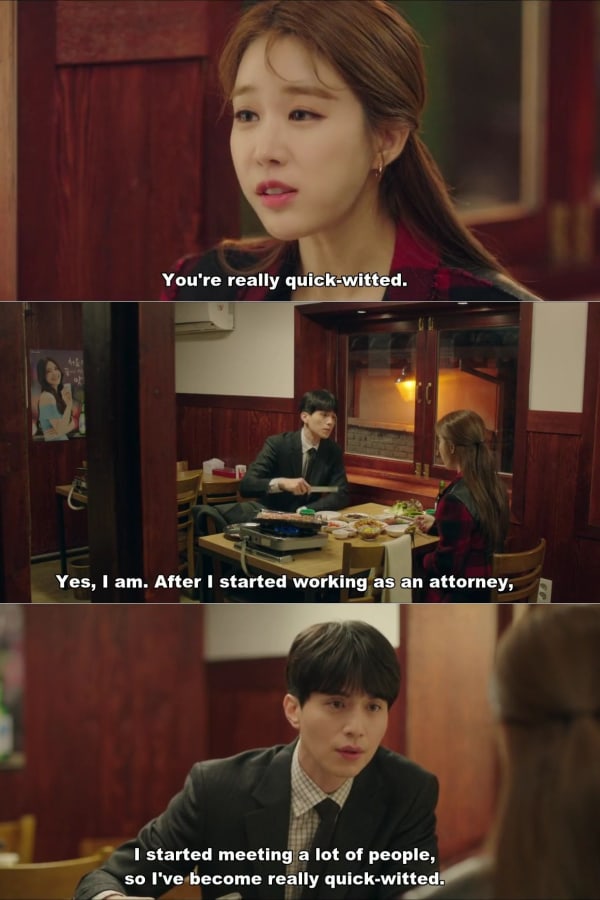 Heh! He’s so quick-witted, the sarcasm can’t even land!

5. When pasta invokes a meltdown

Yoon Seo later drunkenly (and very animatedly) tells Jung Rok that she’s really angry at him because he ate pasta without her. She starts crying and even has a mini-meltdown, thanks to alcohol. As viewers, we understand she’s more bothered about him eating pasta with Yeo Reum and ditching her (though I suspect she’s also bummed about not getting to eat pasta itself). But Jung Rok doesn’t understand this, so all he can do is stand there looking understandably taken aback and flustered at her sudden meltdown… over pasta.

6. When Yoon Seo’s hands are cold

When Jung Rok sees that Yoon Seo is cold, he suggests she put her hands in the pockets to keep warm. But because Yoon Seo thinks she’s starring in her own rom-com, she mistakenly thinks that he’s offering his pockets to her. I was screaming internally at Yoon Seo the whole time, telling her not to do it, but she obviously can’t hear me, so the next thing you know, she’s sticking her hand out towards him, only to be denied! Yoon Seo, awww sweetie, awwww… *shakes head in second-hand embarrassment*

The little run-and-chase after the awkward moment is super cute though!

After a long drive back and forth to see their client, Yoon Seo dozes off in the car. Jung Rok considerately pulls down the sunshade and turns down the music so she can rest better. When she wakes up, she asks if she did anything embarrassing, and Jung Rok replies honestly that she snored. Seeing her distraught and vehemently denying it, he quickly retracts his answer and says that it was just a joke. My notes here — “HE’S LEARNING! He’s finally learning!!” Yay for progress! 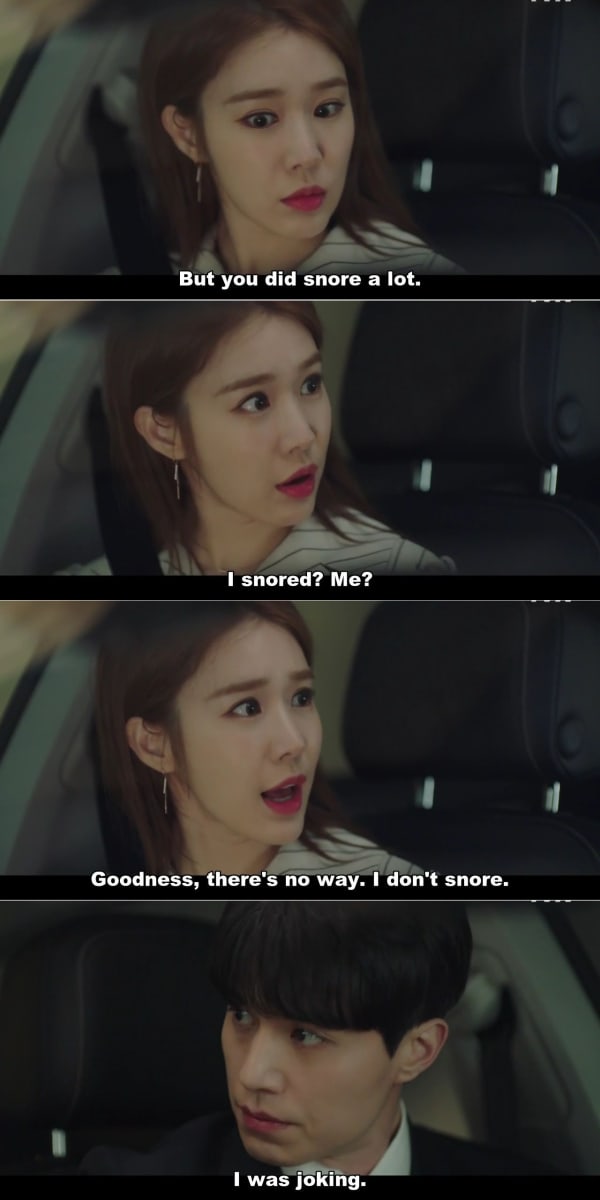 What were your favorite moments from the episodes? Let us know in the comments below!

Belinda_C needs more interactions between the cousin CEOs. They’re a hoot! She’s also really proud of SEVENTEEN’s achievements this comeback. Come celebrate their wins with her on Twitter!