Lai Kuanlin On His Unit With PENTAGON’s Wooseok, Missing Wanna One, And More

Lai Kuanlin recently caught up with his fans on Naver V Live.

On February 25, he communicated with his fans with a session called “Kuanlin’s T(MI) Time.”

First off, Lai Kuanlin talked about what he was up to lately. He said, “I’m working on a production in China right now. I can’t show it yet, but I’m trying to show it to other countries, including China and Korea. So you don’t have to be upset.”

The idol also answered various questions the fans had for him. When asked about what his criteria is for choosing the tags and photos he uploads on his social media, he replied, “There’s no criteria. When I see a nice drawing or scene, I want to share it with fans. So when I see a pretty photo like that, I upload it.”

One fan asked what he thought was the most important thing in fashion, and Lai Kuanlin said, “It’s convenient to wear simple clothes. In fact, when I go to the airport, I don’t show my airport fashion. I have to take a plane, so I wear comfortable clothes.” 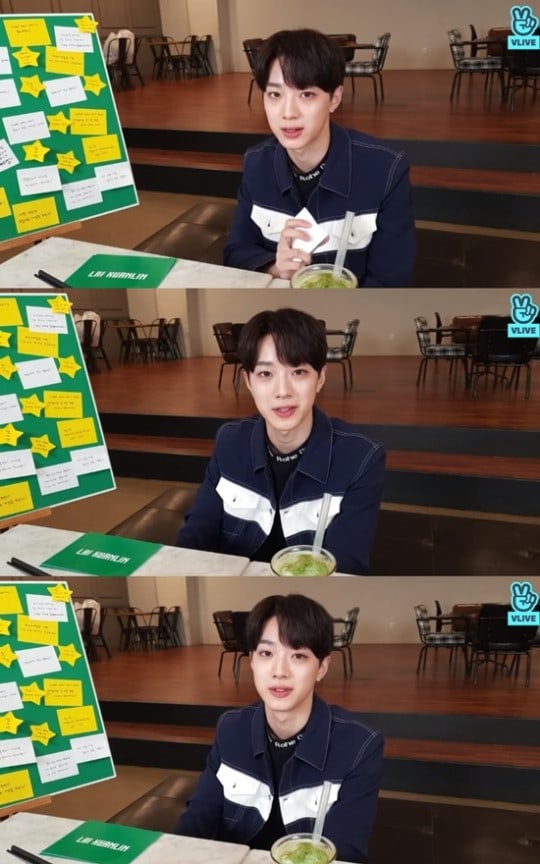 Lai Kuanlin also talked about his cube unit group with PENTAGON’s Wooseok. He commented, “It’s an honor to be in a unit with Wooseok. During the survival program, I said I wanted to be like Wooseok, so now I think it’s fate to be able to do a unit with him. There is also some pressure to do better. I’m working hard to prepare for it. I’m practicing with the choreographers to make a fun choreography. If I can show it on stage, I hope you like it.” Then he added, “Everyone is wondering when our unit was prepared. We prepared a lot. Even if we didn’t have the time, we still did it somehow.”

Lai Kuanlin said that he talked with Wooseok on the phone when he arrived in Korea. He stated, “We contact each other often. That’s why I think he’s in my call records.” He also explained why he wants to be like Wooseok, saying, “He’s good at [rapping], and he’s tall. Even though he just stands there, my gaze goes naturally to him. That’s why I want to be like him.”

Then he mentioned Wanna One and shared, “When I’m abroad, I always want to see them, but when I come to Korea, I feel like I’m with them. I always miss them.”

Lai Kuanlin revealed he wants to raise a dog and said, “I always look at dogs as people. Each dog has a different personality and style. But, honestly, I can’t raise them because of my schedule. If I get a chance later and I’m in a situation fit to raise one, I’ll do it then. You have to think carefully. It can be bad for you and your pet if you start raising one on impulse.”

PENTAGON
Wanna One
Lai Kuanlin
Wooseok
How does this article make you feel?