ITZY made a surprise appearance on the latest episode of SBS’s “Master in the House”!

During the March 10 broadcast of the variety show, the “Master in the House” cast met up with their latest master, JYP Entertainment founder Park Jin Young. After sharing a meal together and taking a tour of JYP Entertainment’s brand-new building, the four cast members and Park Jin Young headed to the dance studio to pay a visit to the agency’s new girl group ITZY.

The “Master in the House” cast members were unable to hide their excitement at meeting the girl group, and Lee Seung Gi joked, “I should have fixed my [hair and makeup] before coming.” 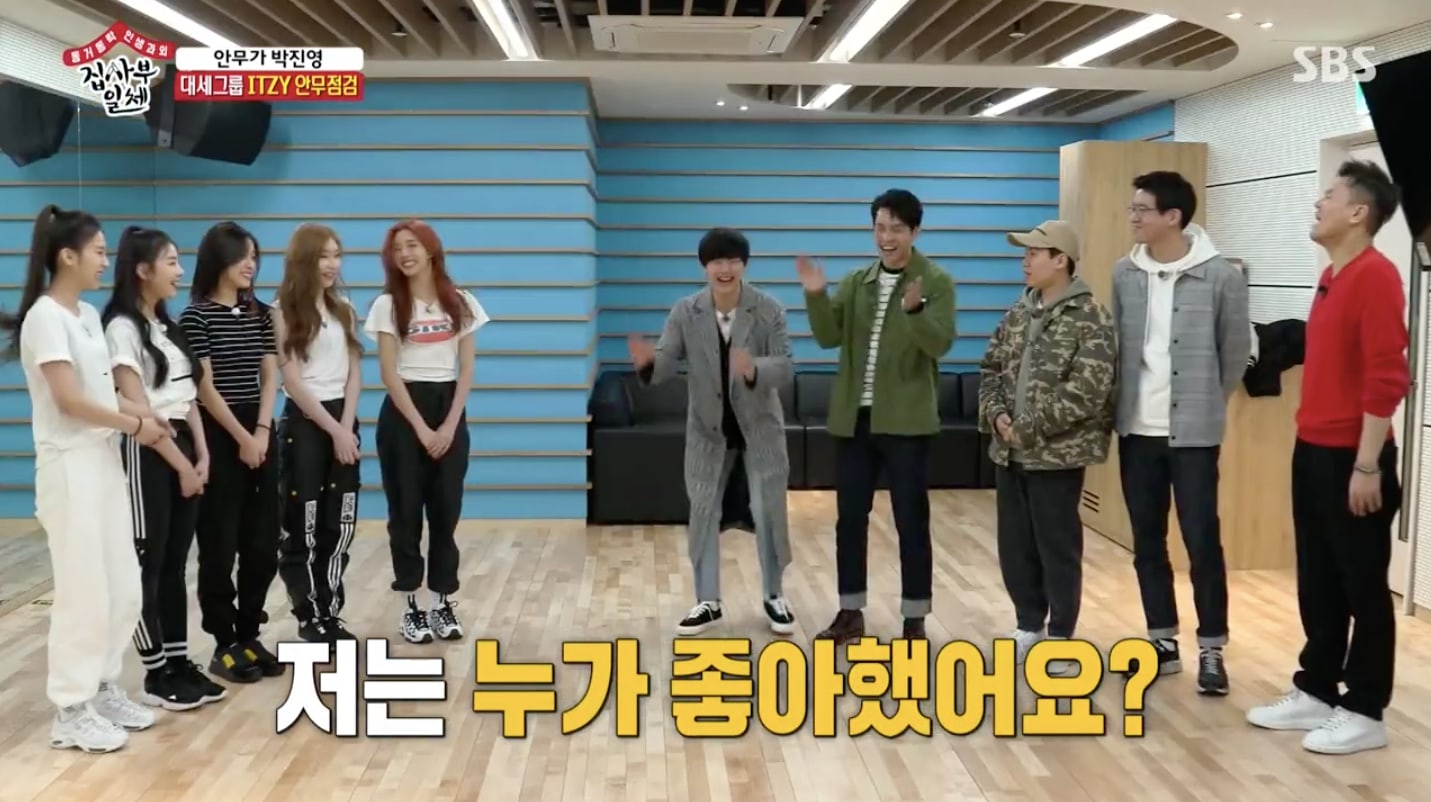 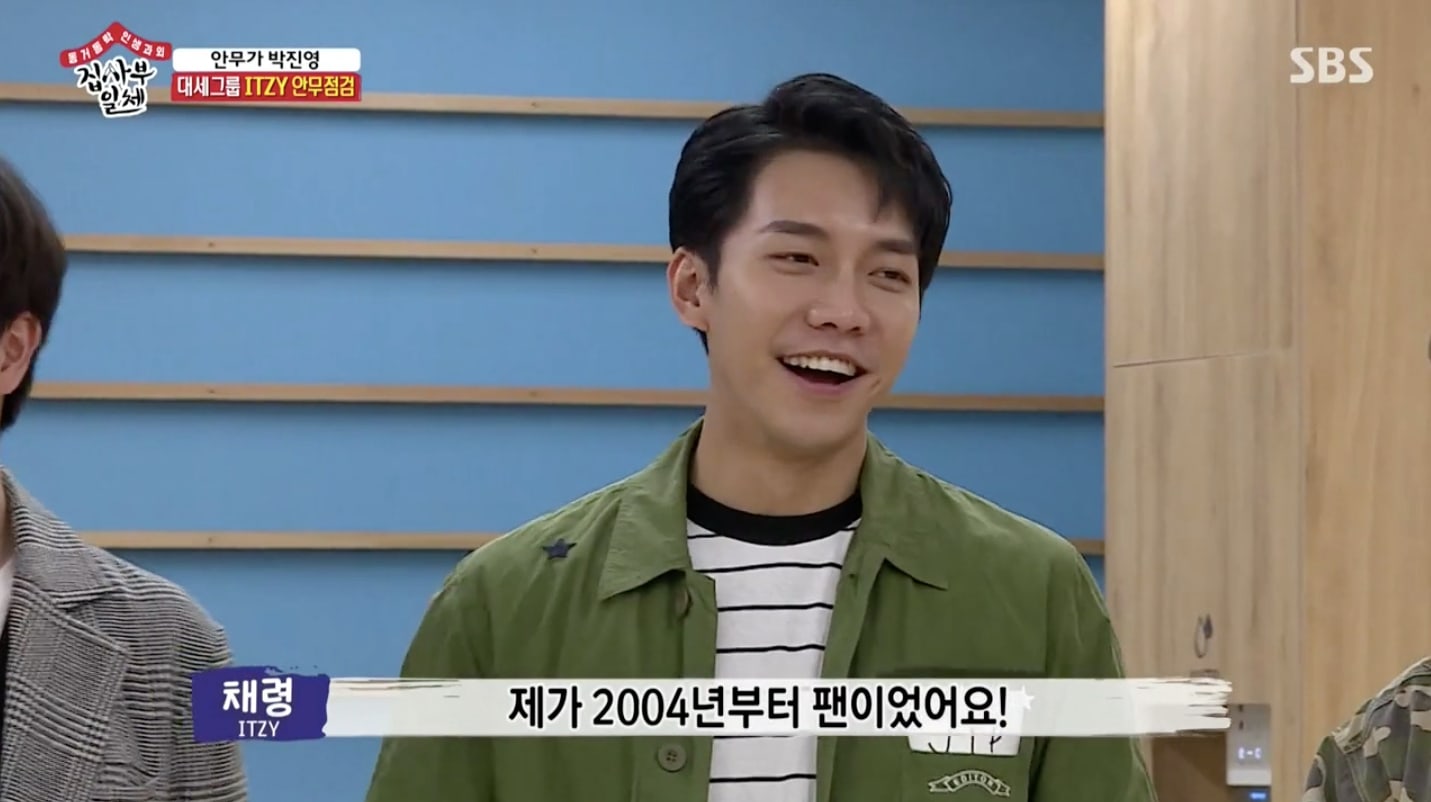 When the production staff suggested that the four cast members greet ITZY with their unique group introduction, a mortified Yang Se Hyung protested, “No, no, we can’t! It’s too embarrassing!” Lee Sang Yoon agreed, “That [introduction] is something we only do for our masters,” and Lee Seung Gi jokingly replied, “We don’t know when ITZY will make it big and come on the show as a master. We’ve got to start paying our dues now.”

After introducing themselves to the rookie girl group, Yang Se Hyung was too shy to look the idols in the eye, and even Park Jin Young hid his face in secondhand embarrassment. A flustered Lee Seung Gi hurriedly exited the room, joking, “I’ll see you next time. I’m too embarrassed to continue filming now.” He then cracked up the ITZY members by accidentally breaking something on his way out.

Once Lee Seung Gi had returned, BTOB’s Yook Sungjae mentioned that ITZY had set a new record for the fastest girl group to win their first music show trophy, and Park Jin Young asked if Lee Sang Yoon had heard of them. Despite his fellow cast members’ suspicions, the actor insisted that he knew who they were, and he later proved himself by revealing that he knew the correct spelling of ITZY’s name. Park Jin Young commented happily, “If Sang Yoon knows who they are, then that means the mainstream public knows them.” 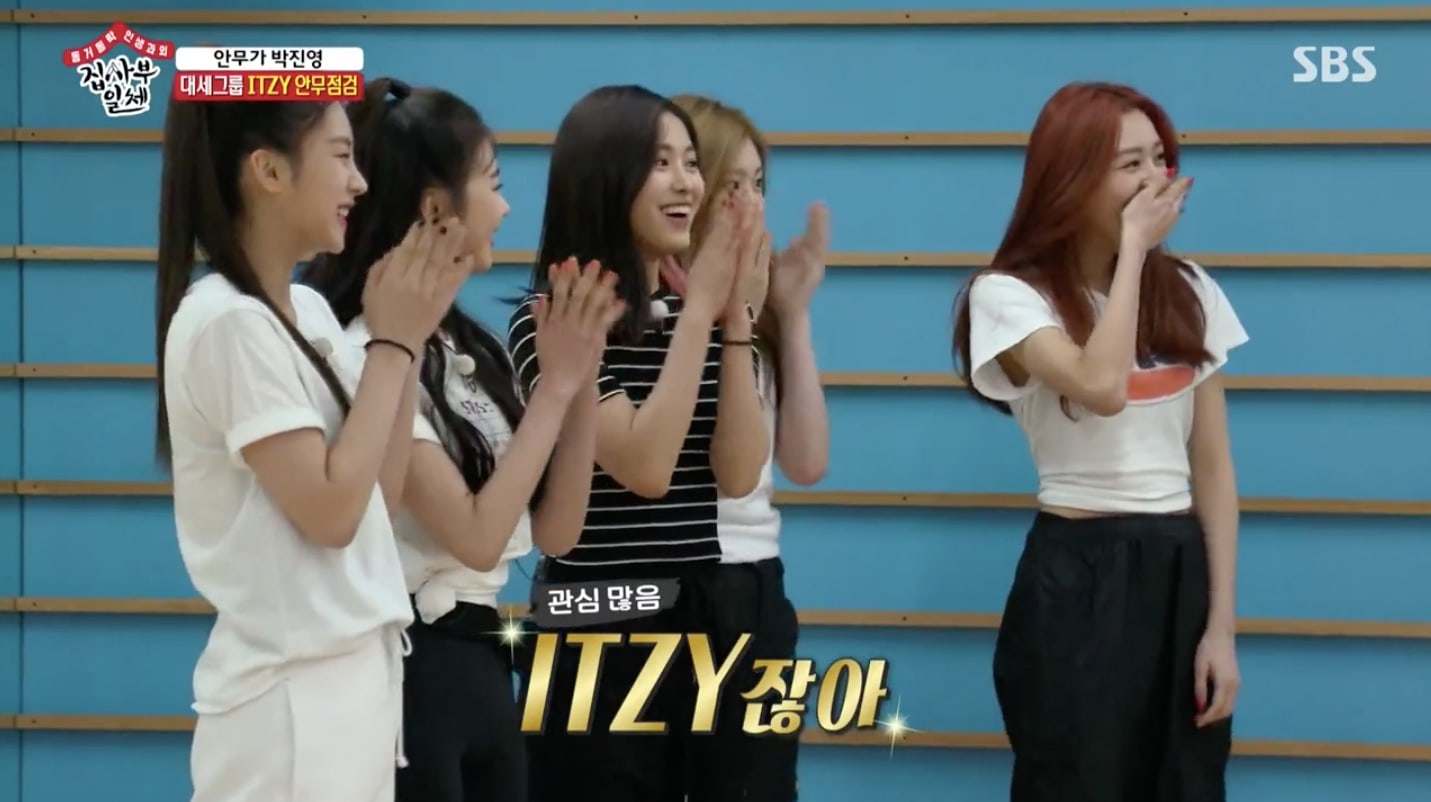 Later on, as Lee Seung Gi attempted to ask ITZY a question, he found himself struggling as he repeatedly stumbled over his words. Finally, Yook Sungjae burst out laughing and asked him, “Hyung, why are you stuttering so much? I think you’re even more nervous than when we met master Yoon Yeo Jung.” Lee Seung Gi replied, “Because master Yoo Yeon Jung wasn’t a girl group.”

ITZY member Ryujin then mentioned that Chaeryeong used to be a fan of Lee Seung Gi, with Chaeyreong confirming, “I was a fan starting from 2004.” Lee Seung Gi was visibly thrilled until Yang Se Hyung perceptively observed that Chaeryeong had used the past tense, and Ryujin revealed, “She was a fan up until 2011.” When Park Jin Young asked what had changed in 2011, Chaeryeong confessed that she had become a fan of actor Kim Soo Hyun after seeing him in the hit drama “The Moon that Embraces the Sun.” Lee Seung Gi responded by taking his jacket off as if preparing for a fight, joking, “Tell Kim Soo Hyun to get out here.” 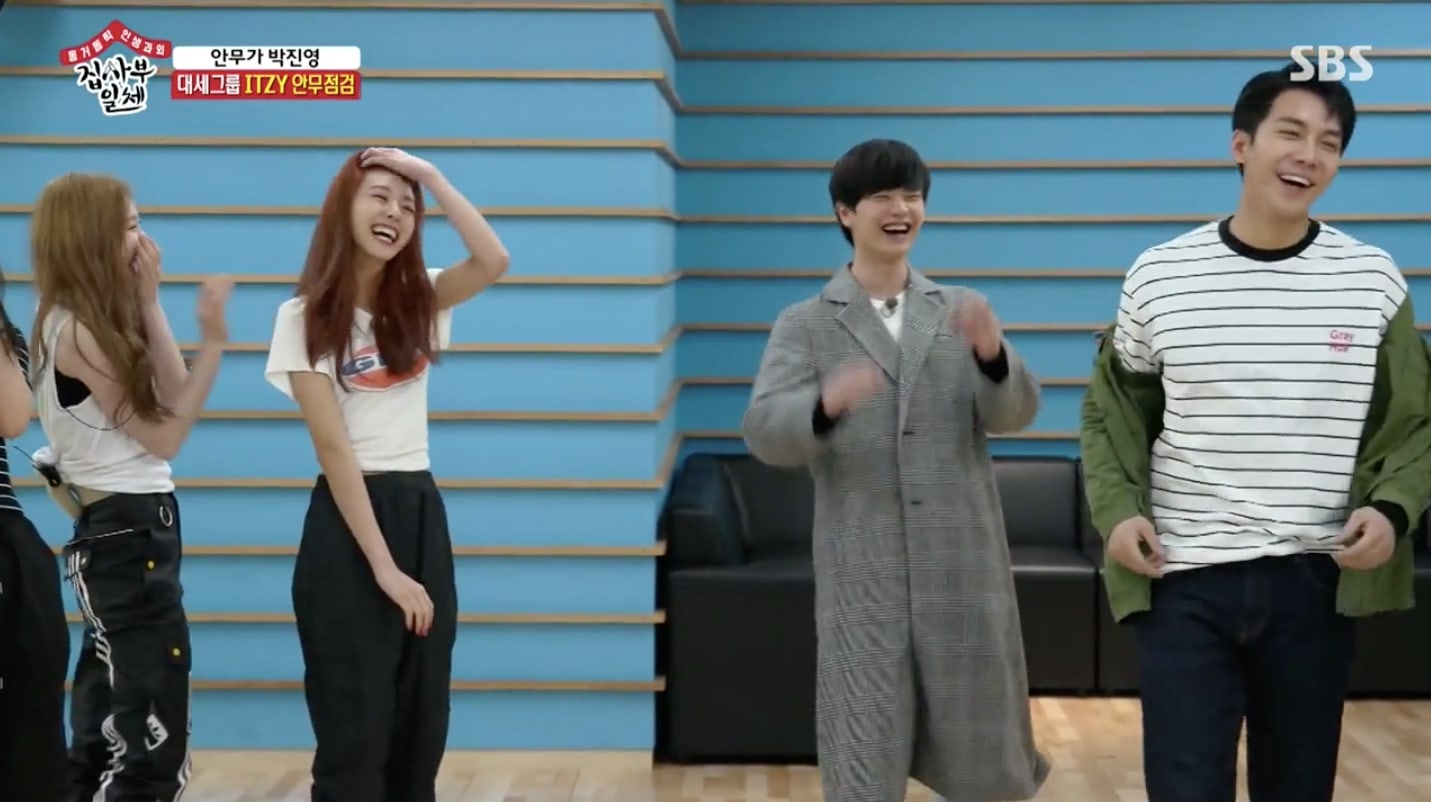 Yook Sungjae asked the ITZY members whether Park Jin Young ever coached them personally, and they confirmed that he was often involved in their training. Yeji and Chaeryeong recalled, “He gave us a vocal lesson just last week.”

Ryujin added, “He gives us vocal lessons, and before our debut, he came [to the studio] to personally train us,” with Lia chiming in, “Whenever he has time.”

Park Jin Young also shared one of the methods that he uses to give the girl group feedback on their performances. “After a music show broadcast, I’ll take screenshots of the parts that I felt were lacking, and I’ll send them to the group chat,” he said. “Because you should be able to take a screenshot of any moment in the performance and see all five of them in a perfectly sharp formation.”

The singer-producer continued, “If one of the five members is out of line, then it’ll show in a screenshot. So I send them the screenshots to let them know, so they can fix it on their own.” 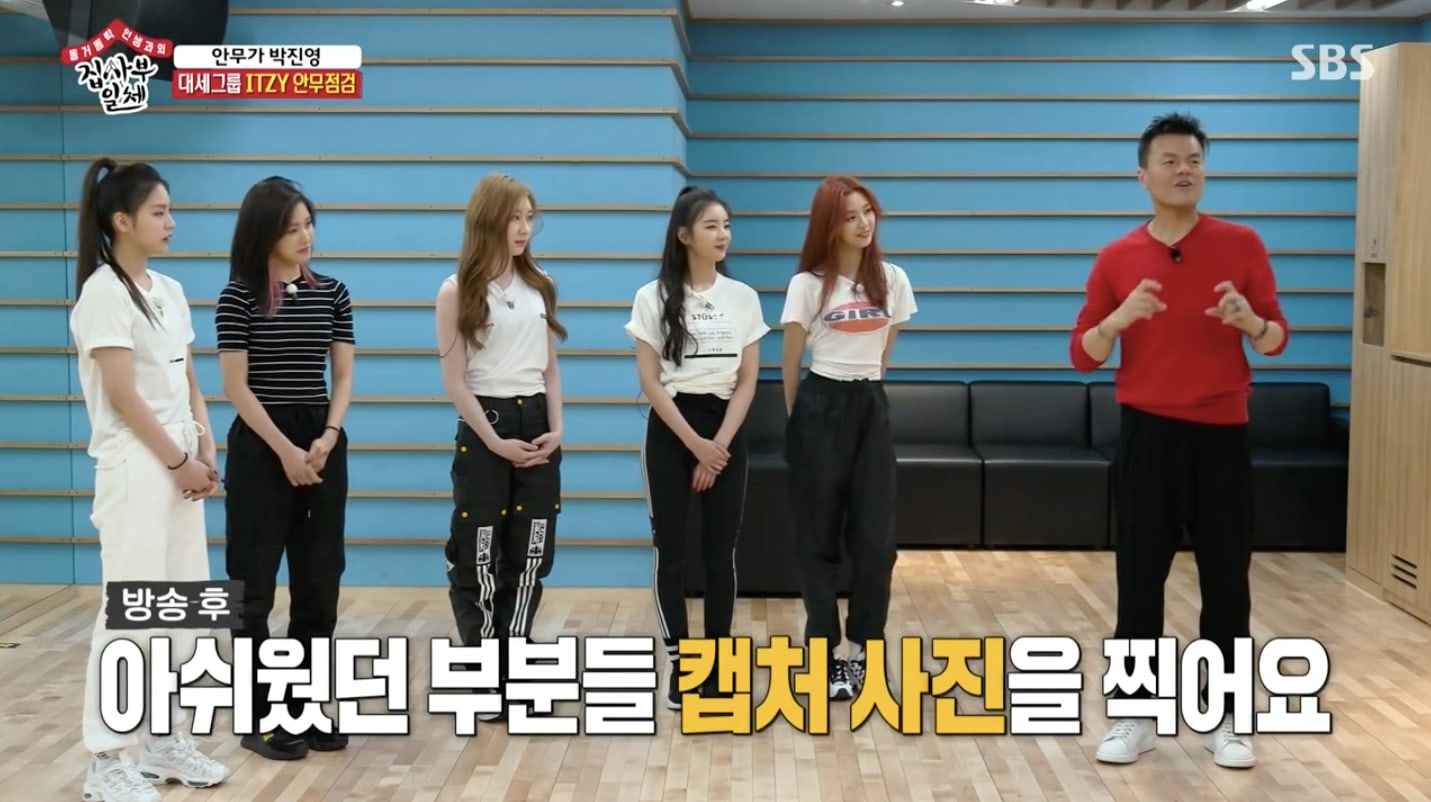 Park Jin Young then asked ITZY to perform the choreography to their debut song “DALLA DALLA” on the spot. The four “Master in the House” cast members were all impressed by their dancing, with Lee Seung Gi commenting, “Wow, they’re not shaken at all by the [variety show] cameras, even though it’d be easy to get nervous with all these cameras here.” Meanwhile, Yook Sungjae and Yang Se Hyung couldn’t help singing along to the song as they happily watched ITZY perform.

Unfortunately, however, Park Jin Young was considerably less impressed. To the visible bewilderment of Lee Seung Gi and Lee Sang Yoon, the JYP Entertainment founder watched the girl group with a grave expression before declaring, “Let’s do it again. It looked sloppy.” 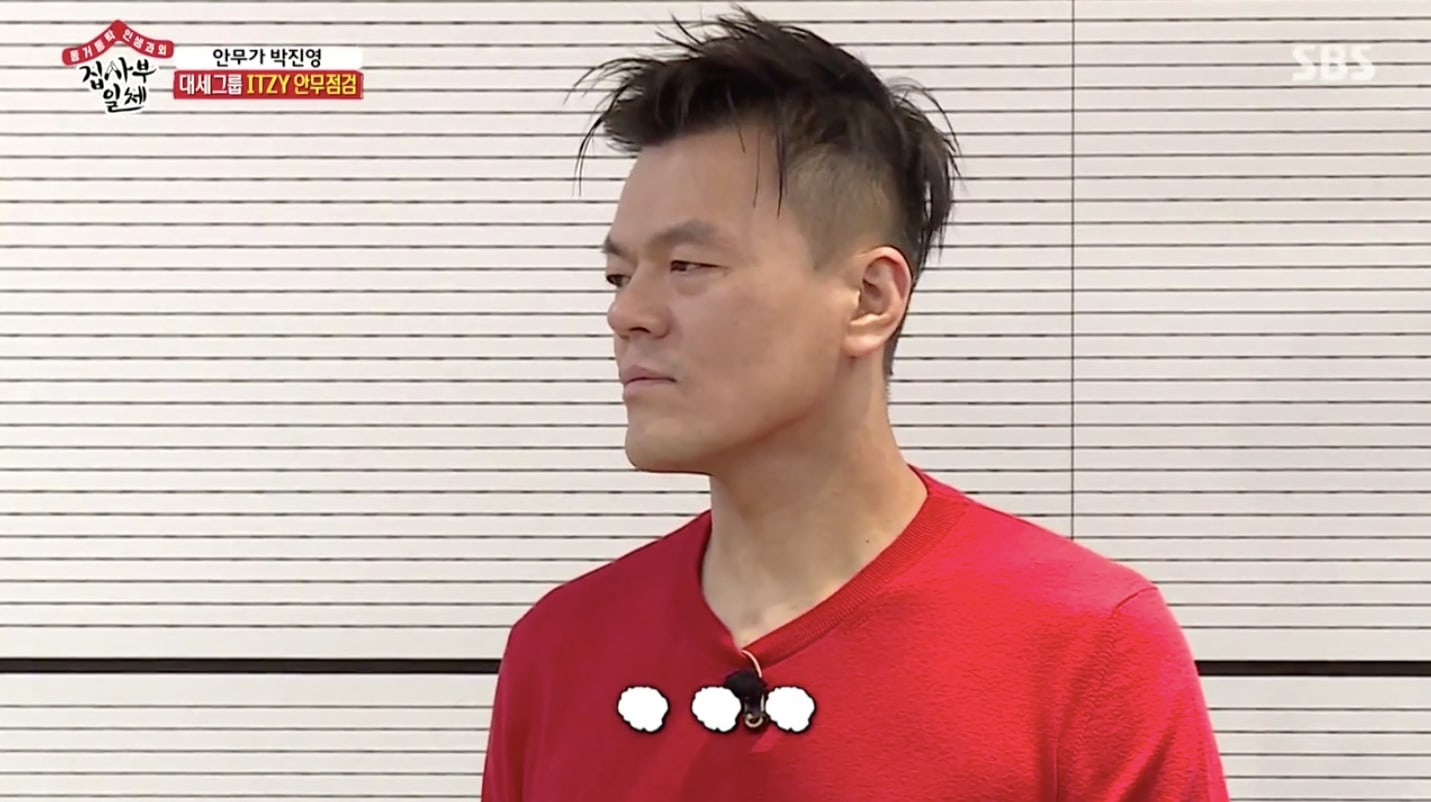 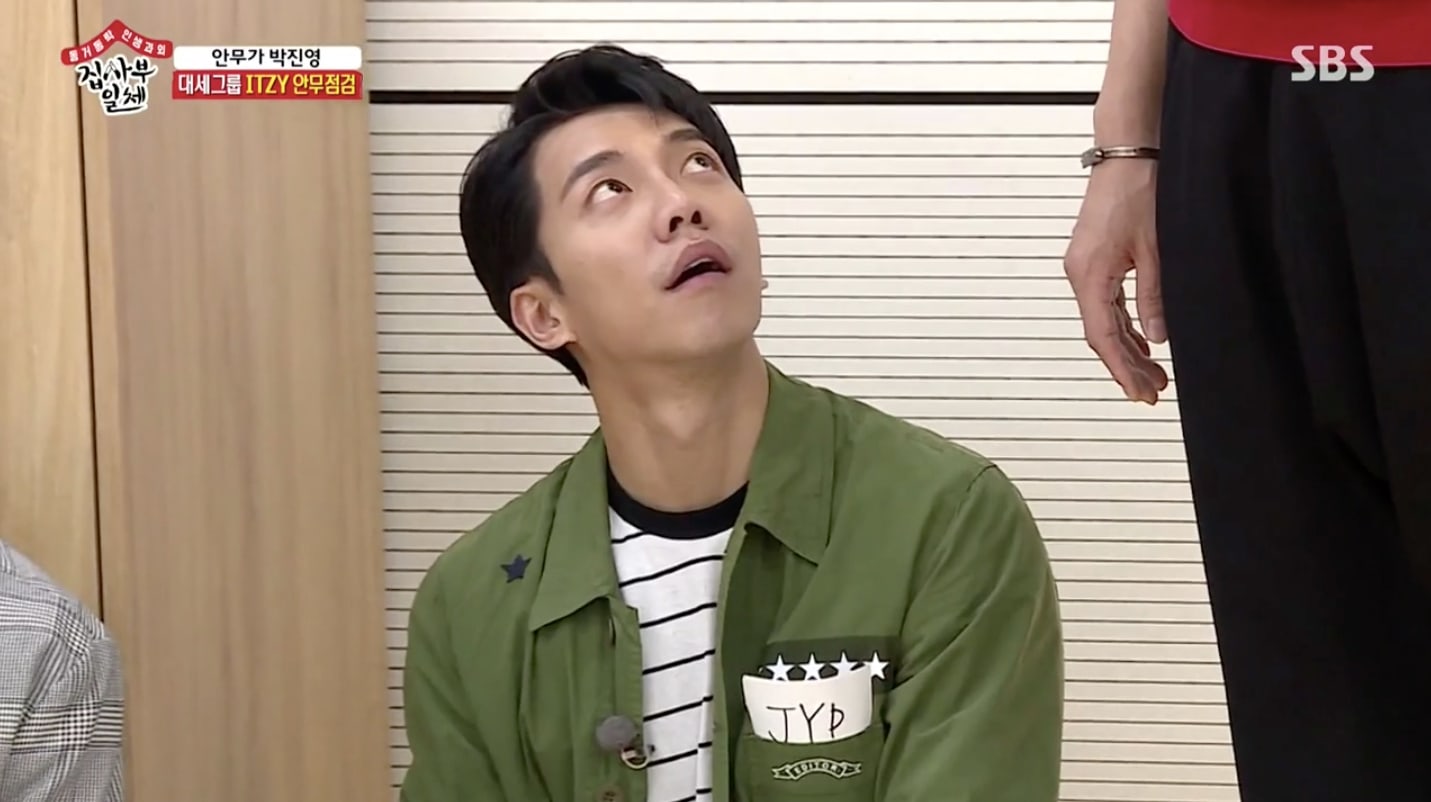 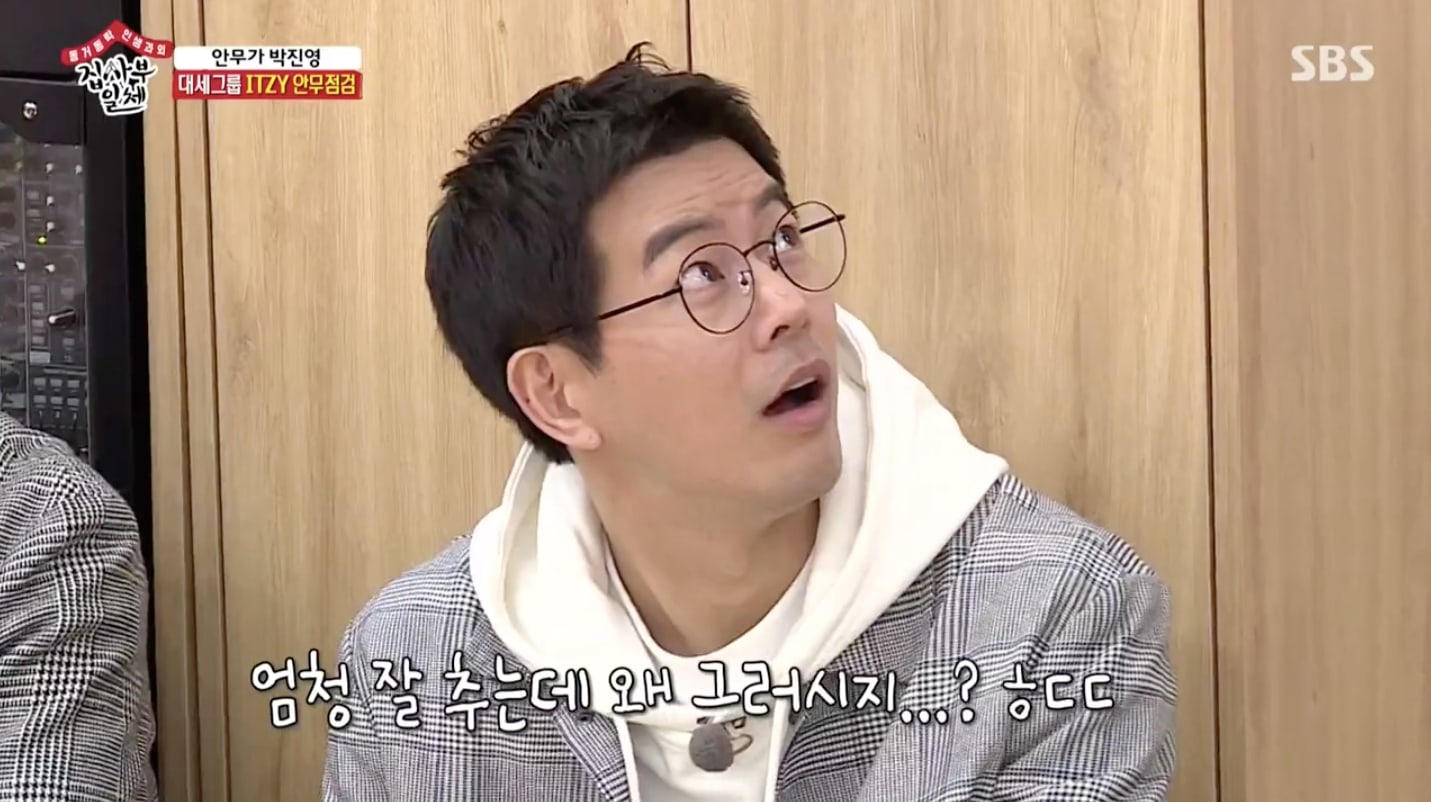 The broadcast ended with a preview of next week’s episode, in which Park Jin Young repeatedly asked ITZY to run through their choreography again. Yook Sungjae quietly told Lee Sang Yoon, “It seems like he may have forgotten that we’re filming a show,” while Yang Se Hyung worried aloud, “It seems like he won’t stop until someone collapses.”

Watch the full episode of “Master in the House” with English subtitles below!

Lee Seung Gi
Park Jin Young
Master in the House
ITZY
How does this article make you feel?