TXT recently expressed their gratitude towards their company seniors BTS!

The new boy group from Big Hit Entertainment recently appeared on the March 11 broadcast of MBC’s “Section TV” for an interview.

During the broadcast, the show’s host Lee Sang Min commented, “So the group that Bang Shi Hyuk produced.” He then questioned if their group name could be shortened to the acronym “TXT” when said aloud.

Lee Sang Min later revealed that BTS had mentioned TXT during a red carpet interview at this year’s Grammy Awards. The senior group had been asked to give some advice to their new company juniors, and RM responded by saying, “We still try to stay ourselves. We could be proud, but we just still try to keep on with what we’re doing.” 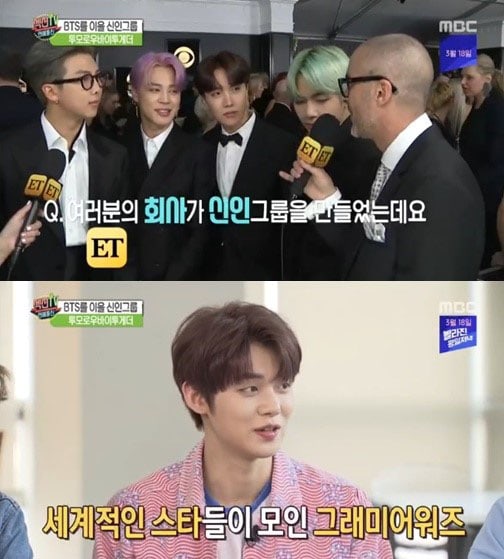 With a smile, Yeonjun commented, “It was a place for world stars to gather. We were so honored. We were also really touched because they gave us a lot of great, heartfelt advice.”

Taehyun then added, “Whenever we occasionally bump into [BTS] at the company, they tell us that they support us and say so many great things, so I always feel good and thank them.”

Yeonjun then expressed his goals of performing in other countries as he stated, “If possible, I’d like to go overseas. I want to show our songs and performances to many people.”

BTS
Section TV
TXT
How does this article make you feel?