PENTAGON’s Wooseok and Lai Kuanlin talked about their goals and more as they started promotions as a unit!

On March 11, Wooseok x Kuanlin debuted with their first mini album “9801” and held a showcase in Seoul.

When the MC of the showcase mentioned to Lai Kuanlin that they’d heard he’s loved Wooseok since he was a trainee, Lai Kuanlin made everyone laugh when he replied firmly, “Yes. I’ve loved him.” He explained, “When I became a trainee, I noticed him first because he was tall. But he was also good at dancing and rapping. I naturally came to dream of being a cool singer like him.”

“I’m learning things every second of the day, from the time I wake up to when I go to sleep,” he added. “He’s someone who’s been a huge influence on me ever since I was a trainee. I’ve received a lot of advice from him.”

Wooseok shared, “When Kuanlin first joined the agency, they told me, ‘There’s a new kid who’s just like you.’ I thought to myself, ‘It wouldn’t be easy to resemble me’ and I went to go check him out. I noticed him more because he had a look in his eyes that showed he liked me.”

As they talked about forming a unit, Wooseok said, “A lot of people around us have told me that we seem similar, and they also suggested that we try being a unit. When I heard that I thought, ‘Oh yeah? Should we try it?’ That was our beginning.” Lai Kuanlin added, “We told the agency that we wanted to try something fun. I think they took what we said seriously and gave us this opportunity.”

The unit’s album is Lai Kuanlin’s first promotions after the end of Wanna One’s contracts. “I want to make good use of this opportunity,” he said. “At the same time, I didn’t rush while preparing, and instead was relaxed. It was a fun process to prepare our album. Rather than feel pressured, I’m excited about the future.”

When asked if Wooseok’s fellow PENTAGON members shared any advice, Wooseok said, “The hyungs gave me a lot of advice. They all said ‘Since this an album that will allow you to show your colors and your chemistry with Kuanlin, be ambitious and enjoy it.”

Wooseok also explained that they worked on their music while focusing on their “chemistry.” Lai Kuanlin added, “When we met in mid-January to work on our album at the agency, we happened to be matching with even the same pants and sneakers. We were really both so shocked. Even the brand was exactly the same. I think that’s what they call ‘chemistry.'”

Wooseok said, “It felt like a sudden gift from heaven saying, ‘Work together with Kuanlin on whatever you want to do.’ So I prepared a lot and felt really ambitious.” 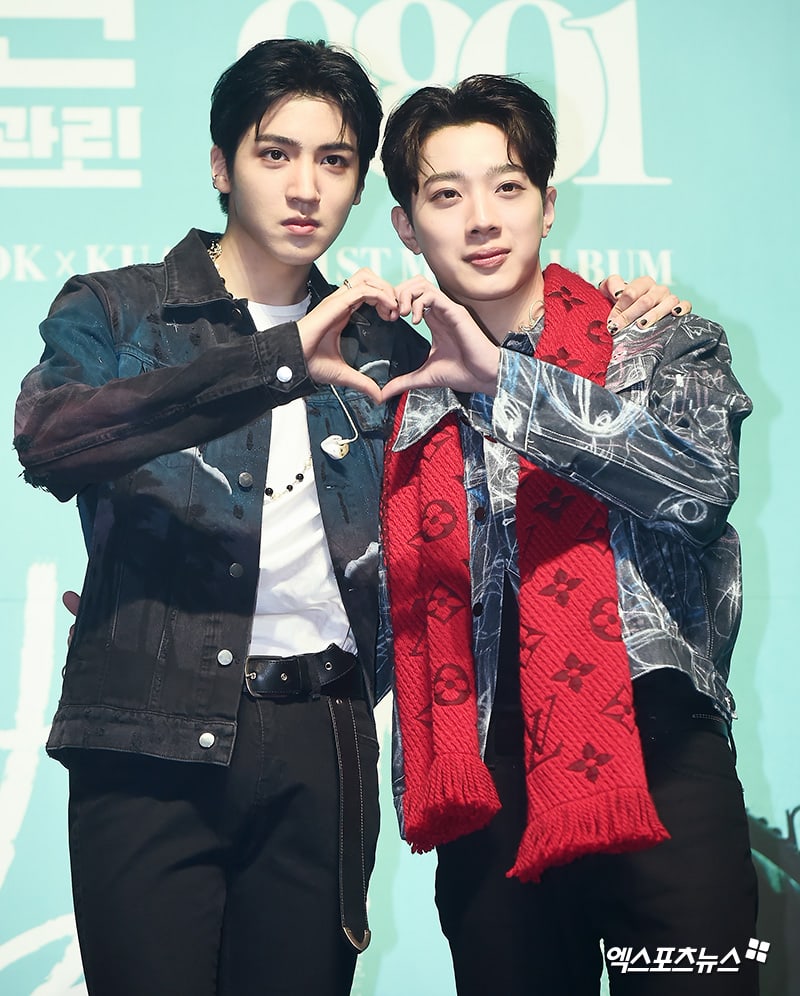 The pair performed their title track “I’m A Star” for the first time at the showcase, as well as talked about their b-sides.

Lai Kuanlin said, “There are five songs including our title track. Two of those are Wooseok’s and two are my solo songs. ‘Hypey’ is a song that features GOT7’s Jackson. I think you should look forward to it. Also ‘Good Feeling’ is an honest song that includes my story.”

Wooseok shared, ‘I want to talk about the song ‘Always Difficult Always Beautiful.’ It’s a song that I made with PENTAGON member Kino. I hope you’ll love it a lot.” Lai Kuanlin said that he thinks of their unit album as a way for him to show the diverse sides of his musical color, beyond the young image that he’s shown so far.

Lai Kuanlin also talked about their goals. “Our main goal for this album’s promotions is to have fun,” he said. “I haven’t been thinking that we need to break any kind of record, but still it’d be good if we could enter the charts.”

When asked to share a first place promise, the duo said, “We’ll switch parts and upload a choreography video.”

PENTAGON
XPN
Lai Kuanlin
Wooseok
How does this article make you feel?