Joo Jin Mo is set to have a drastic makeover!

In SBS’s new Wednesday-Thursday drama, Joo Jin Mo has taken on the role of Han Seok Joo, who was once an elite photographer that became an alcoholic homeless man due to the mistake of one picture. He meets Ji Soo Hyun (played by Han Ye Seul) and becomes a paparazzo that does anything to get the perfect picture.

Last episode, Han Seok Joo, who became homeless due to his past clinic scandal, fought with Ji Soo Hyun. Han Seok Joo coincidentally ran into Ji Soo Hyun who offered him his daughter’s address in exchange for him taking pictures of idols gambling. Han Seok Joo managed to successfully take the picture and visited Ji Soo Hyun to complete the exchange. 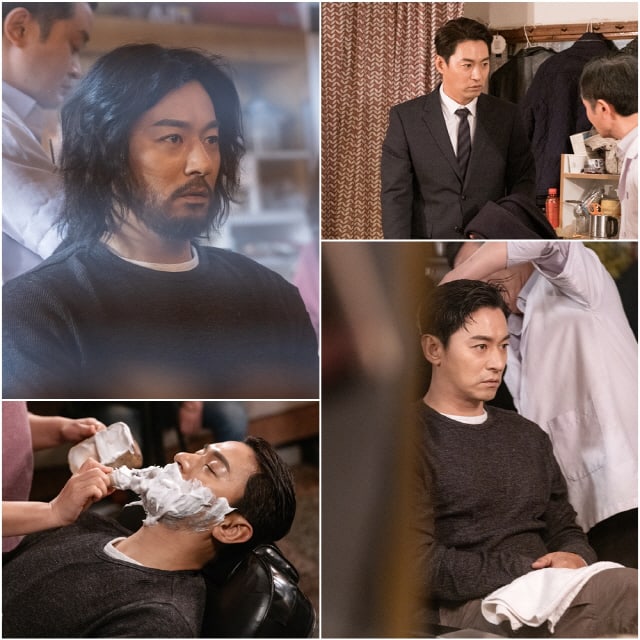 The recent stills that have been released show Joo Jin Mo transforming from his homeless look to his trademark gentleman look. After cleaning himself up, he visits the barbershop to get a fresh shave and haircut. Looking half excited and half nervous, Han Seok Joo starts anew after having lived with the guilt of reporting falsely.

To act the part of a homeless man, Joo Jin Mo took a long time to prepare for filming because he had to don a wig and put on facial hair. Before filming, Joo Jin Mo seemingly looked somewhat disappointed, saying, “Am I finally taking off my wig and facial hair?”

To make the scene feel even more realistic, the scene was filmed at an actual barbershop that was open on the set. In the midst of all the people moving around busily in a small space, Joo Jin Mo still managed to perfectly portray Han Seok Joo’s complicated emotions.

The production staff said, “We want to express our thanks for Joo Jin Mo who ran, fell, and worked his body to the fullest while wearing a fake wig and facial hair. Please look forward to how Han Seok Joo will make a 180-degree transformation.”

“Big Issue” airs every Wednesday and Thursday at 10 p.m. KST. Watch the latest episode with English subtitles on Viki below!