On the March 15 broadcast of the show, SBS reported that Yoo In Suk was an influential figure in the chatroom including the former CEO, Seungri, Jung Joon Young, Choi Jong Hoon, and four other individuals.

During the broadcast, SBS stated, “The key figures in the chatroom are Seungri, Jung Joon Young, and CEO Yoo of Yuri Holdings. Yoo In Suk, who is known for being Seungri’s business partner, has been revealed to be friendly with a police chief. The fact that his actual role was being the problem solver [of the group] has come to light.”

According to the report, Yoo In Suk gave out various instructions to “prepare women” in the chatroom, and stated in 2015 while preparing a Christmas party, “We’re the ones making the ‘The Great Gatsby’ film. Let’s call all the girls we know that day. To the point where there aren’t any girls left in the clubs.” Choi Jong Hoon and other members of the chatroom also referred to Yoo In Suk as “CEO Yoo,” revealing his powerful position even among the other members. He was also revealed to have helped cover up news of Choi Jong Hoon’s drunk driving incident back in 2016. 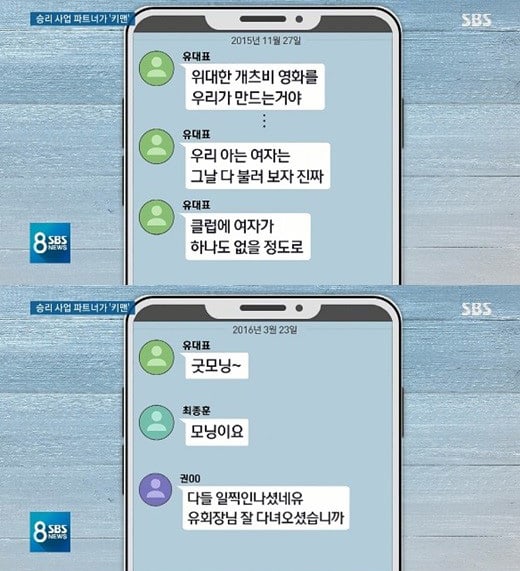 When SBS met with Yoo In Suk before the broadcast aired, he stated, “The contents [of the chatroom] were overblown due to my younger friends’ desires to show off. It’s definitely not true.” His position changed, however, when he admitted during his police investigation held on March 14 that he had contacted a senior superintendent officer.

Yuri Holdings
How does this article make you feel?