KBS has reported that Jung Joon Young received services from a prostitute arranged by Yoo In Suk, the now former CEO of Yuri Holdings.

The March 15 broadcast of KBS1’s “KBS News 9” included a report on Yoo In Suk, who recently underwent police questioning for allegations of providing prostitute services for business investors. He is known for being Seungri’s business partner, and he has been named as the “problem solver” in the group chatroom that also includes Seungri, Jung Joon Young, Choi Jong Hoon, and four other individuals.

Jung Joon Young replied, “She seems to be an expensive ***,” and Yoo In Suk said “Yes” with more symbols for laughter.

“Okay. Is she coming now?” asked Jung Joon Young, and Yoo In Suk replied, “Yes, she will be there in 30 minutes.”

30 minutes later, Jung Joon Young asked him, “Hyung. Why isn’t my gift here?” KBS stated that the services from a prostitute appeared to be given to him as a Christmas gift. 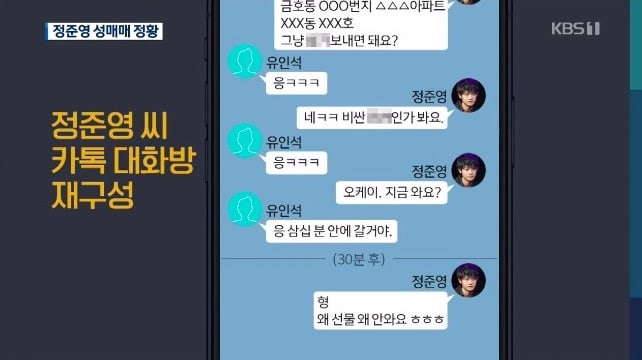 In a conversation from April 7, 2016, Jung Joon Young also told CNBLUE’s Lee Jong Hyun that he had met prostitutes in Berlin and had sex. He told him that the women there were good and explained that many were Romanian. 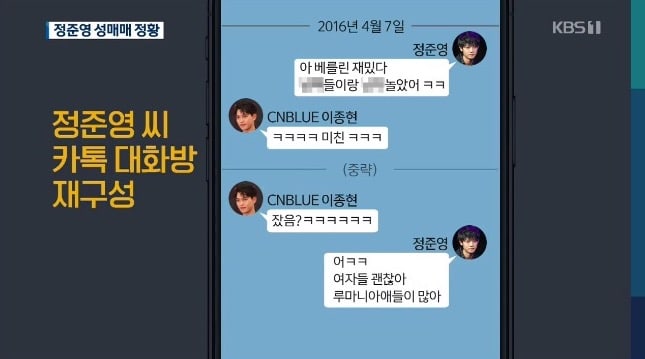 KBS news stated that in addition to charges of the filming and sharing of illicit videos, Jung Joon Young may also be investigated for prostitution. South Korea’s law for criminal jurisdiction follows the nationality principle, meaning that its nationals can be prosecuted for crimes such as sex tourism committed abroad.