Gaon Chart has revealed its chart rankings for the week of March 3 to March 9!

Big Hit Entertainment’s new boy group TXT made a strong debut on the Gaon weekly charts, earning a double crown by topping both the physical album chart and the social chart this week. Meanwhile, N.Flying continued their incredible success on the charts by topping both the overall digital chart and the streaming chart with their hit song “Rooftop.”

TXT’s debut mini album “The Dream Chapter: STAR” topped this week’s physical album chart, followed by GOT7’s new sub-unit Jus2’s “Focus.” SHINee’s Key’s repackaged solo album “I Wanna Be” debuted at No. 3 on the chart, with HOTSHOT’s Ha Sung Woon taking No. 4 for the week with his solo mini album “My Moment.” Finally, MONSTA X maintained their position at No. 5 with their second studio album “Take.2: We Are Here.” 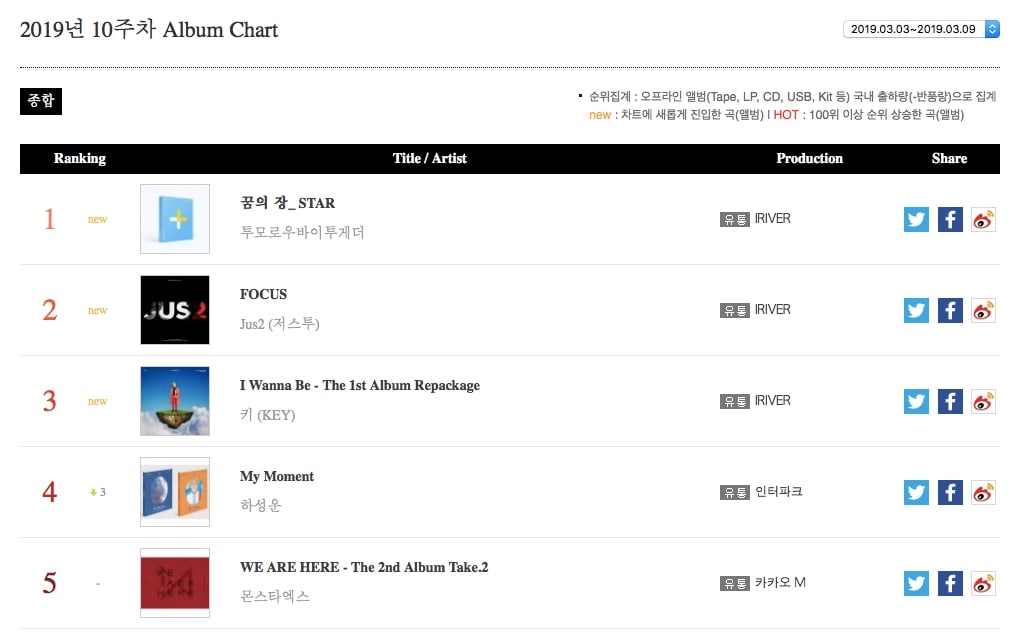 The top five songs for this week were exactly the same on the overall digital chart and the streaming chart. N.Flying’s “Rooftop” held onto its spot at No. 1 for the second consecutive week on both charts, while ITZY’s “DALLA DALLA” rose to No. 2. Kassy’s “The Day was Beautiful” came in at No. 3 for the week on both charts, followed by MAMAMOO’s Hwasa‘s “TWIT” at No. 4 and Woody’s “Fire Up” at No. 5. 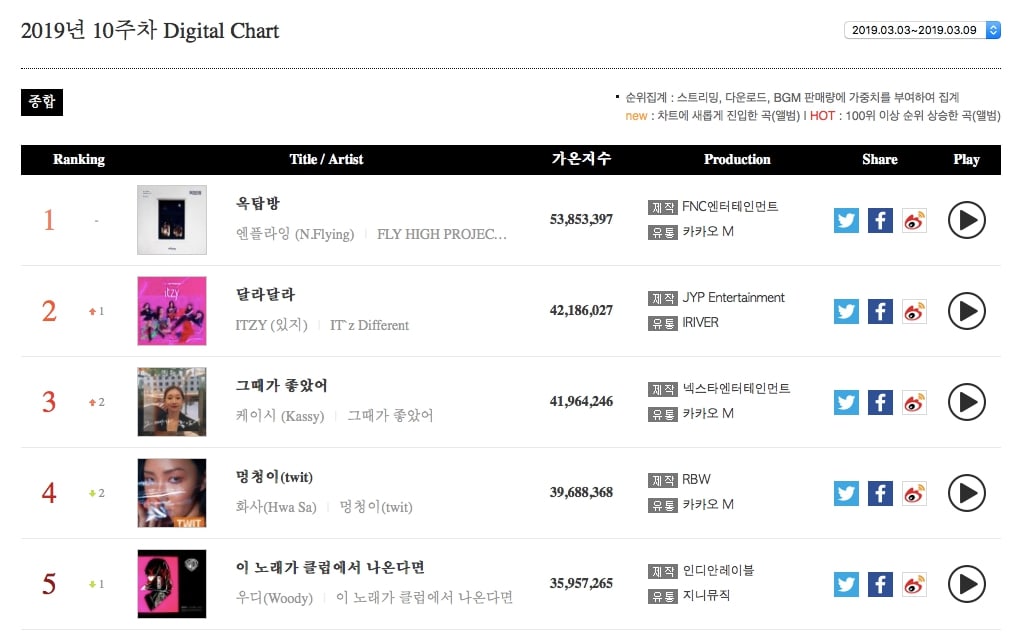 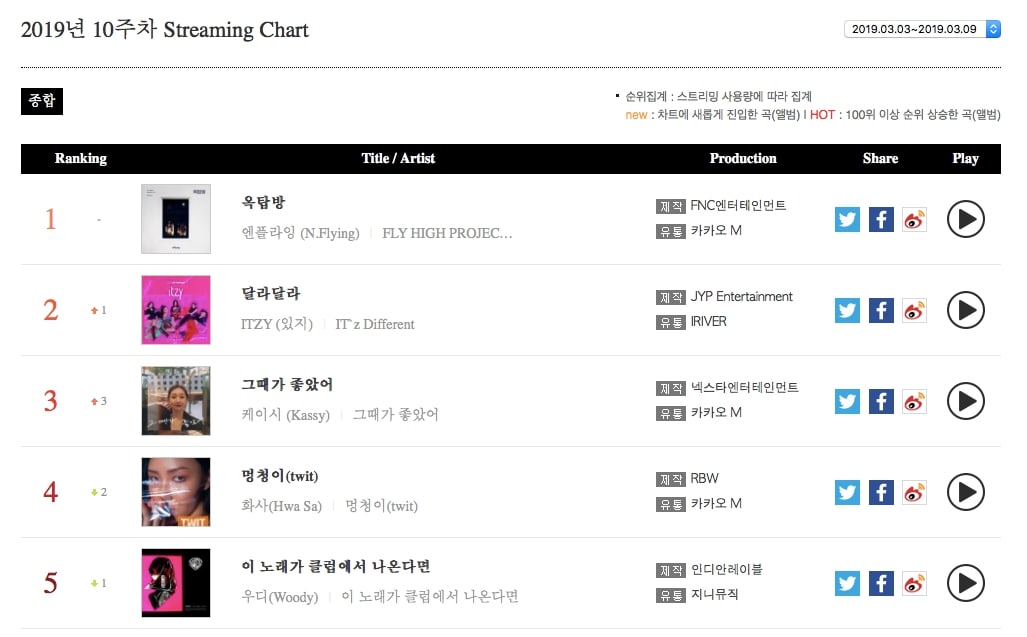 Sunmi’s “Noir” debuted at the top of the digital download chart this week, followed by N.Flying’s “Rooftop” at No. 2. 10cm’s new song “However” debuted at No. 3 on the chart, with Kassy’s “The Day was Beautiful” trailing at No. 4 and ITZY’s “DALLA DALLA” at No. 5. 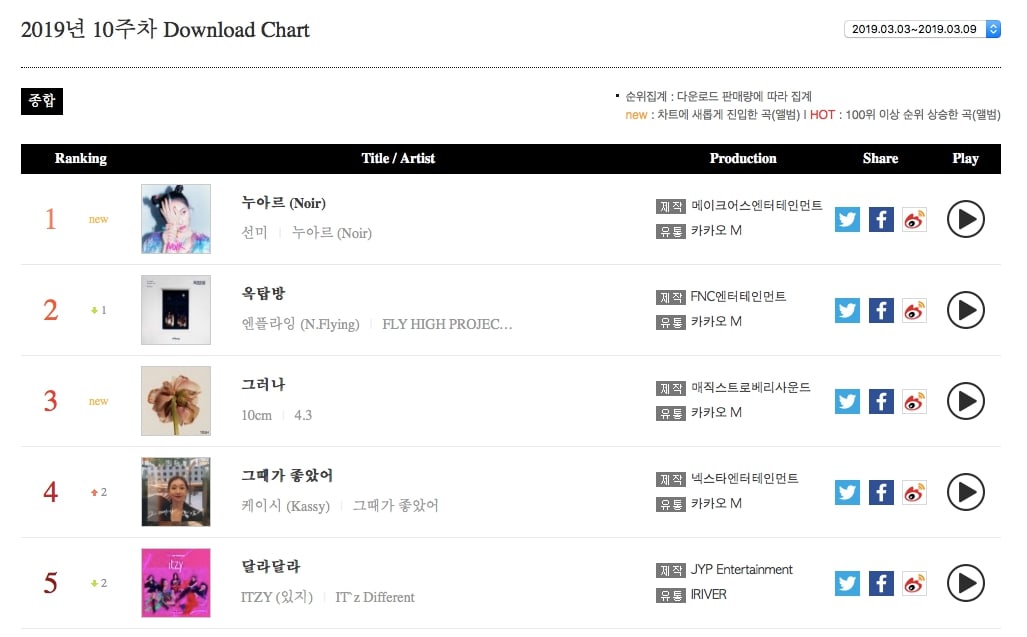 New releases dominated this week’s social chart, with TXT’s debut title track “CROWN” taking No. 1 and Sunmi’s new song “Noir” debuting at No. 2. T-ara’s Hyomin enjoyed an especially strong week on the chart, with her solo tracks “Allure” and “U Um U Um” rising to No. 3 and No. 4 respectively. Finally, (G)I-DLE’s latest title track “Senorita” rounded out the top five for this week. 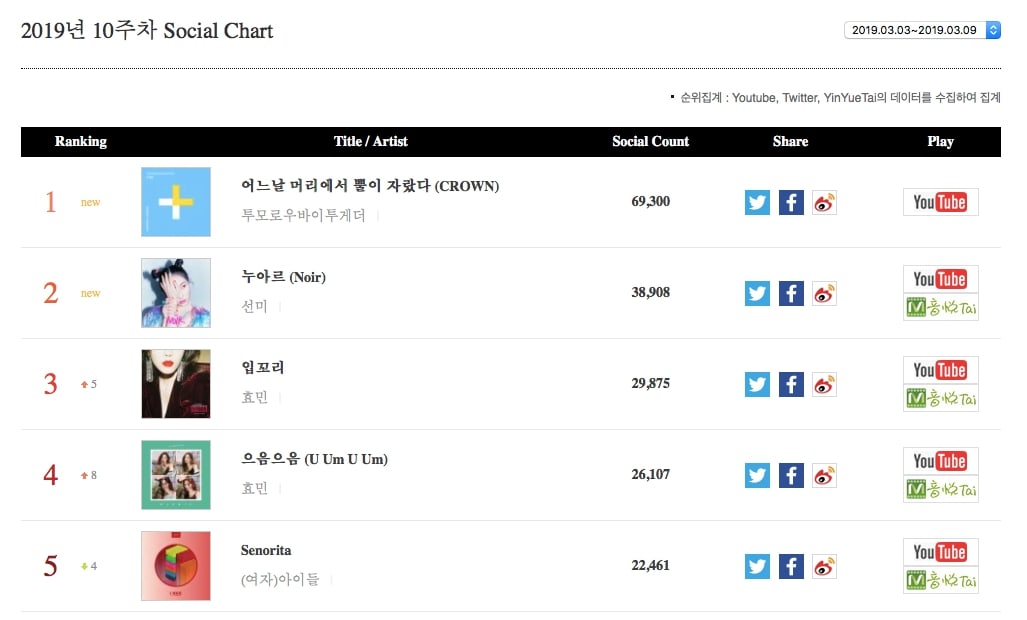