Yoon Ji Oh testified at the trial of Mr. Cho, a former Chosun Ilbo reporter, who was indicted on charges of sexually assaulting the late actress Jang Ja Yeon.

The prosecution called Yoon Ji Oh as a witness in the trial held at the Seoul Central District Court on March 18.

In the first trial held since the judge panel was changed, the court held a closed-door trial on the grounds that it was a sexual crime case. Yoon Ji Oh was watching the trial as a spectator with three lawyers from the late Jang Ja Yeon’s legal aid team.

The prosecution asked the court to allow Yoon Ji Oh to give testimony, and the court gave permission.

Yoon Ji Oh left the court after a 50-minute witness interrogation and held a press conference. When she heard the news of the extension of Jang Ja Yeon’s case, she collapsed into tears in front of the courthouse. She said, “[I cried] because President Moon Jae In spoke for the first time about revealing the truth about [Jang Ja Yeon’s case], and the case has also been extended by two months.”

Concerning her witness testimony given that day, Yoon Ji Oh said, “I told you exactly what I saw based on the truth. It was hard to recall, but I did so because they asked me to describe everything in detail. It’s hard for me psychologically to be exposed to the media, but I’m doing the interview so the perpetrator can see it. It would be nice if justice were implemented in Korean society and [Mr. Cho] paid for his crimes, but if not, I hope [Mr. Cho] will at least live with a guilty conscience.”

Then she added, “There are some celebrities who know more than I do. I’m not the only witness. I ask you to testify with me. I have never sought any compensation. No matter how the criminals are punished, Jang Ja Yeon won’t come back to life. In return for a long fight that can’t be compensated with anything, I hope that the truth will be revealed.” 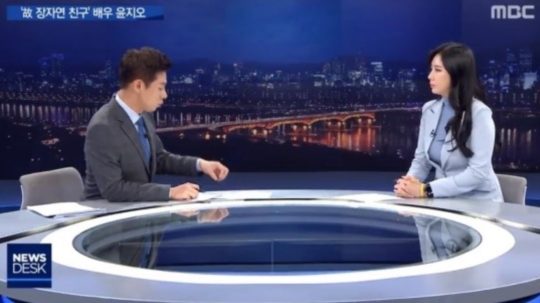 She revealed that the reason why the trial had to be kept private is because there a new person involved in the case who has not been revealed to the public. She explained, “They may have concerns and worries about their personal security, so I also agreed with the decision to [keep it private].”

Yoon Ji Oh said, “Because it suddenly became a private trail, even I, the witness, left the courtroom and entered only when I had to testify. It’s difficult to reveal who the new person is right now.”

The anchor pointed out she cried a lot when she exited the court, and she shared, “I was in a very emotional state. When I testified, I controlled my emotions well and didn’t cry. But as soon as I got out, the lawyers gave me good news, and I think I was overwhelmed by that. I was very nervous with not much time left until the end, but I was happy to hear that the investigation had been extended for two months.”

When asked about another celebrity who was present at the drinking party, she said, “I actually testified a few hours ago, but I can’t tell you about that as a witness. I want to give them the right to explain themselves.”

The reporters then tried to persuade Yoon Ji Oh to reveal the name, but she said, “I told the investigation team everything. As you know, I’ve had a lot of difficulties testifying for the last ten years. I’ve been followed and have had to move several times before, and I was eventually forced to go overseas. Even before I returned from abroad, a media outlet called and asked where I was, and there were two traffic accidents before I came.”

Then like she explained in her previous Instagram post, she explained, “What I don’t tell you due to various circumstances is to prepare for a long battle, not to protect [the perpetrators]. If they sue me for defamation, I’ll end up paying for defamation as a suspect, not as a witness. I don’t want to spend a single cent on them.”

Yoon Ji Oh continued, “Can you take responsibility if I reveal everything? I’m only in the studio for a few minutes. I still have to go on living afterwards. Life even [after giving a testimony] has been difficult. I have consistently told the prosecution and the police about this, and I think it is something that they need to publicize and reveal. As a citizen, and a witness, I can’t tell you anything.” 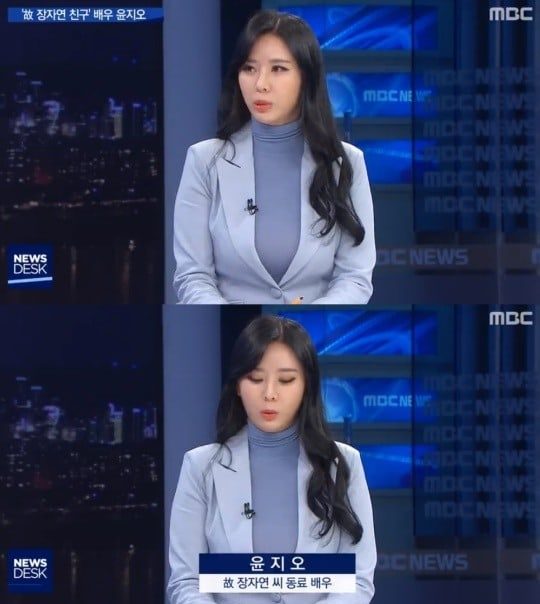 Due to security risks, the police have taken measures to protect Yoon Ji Oh. She has recently decided to open a support account to prepare for the long-term battle for Jang Ja Yeon, and the biggest reason is to protect her own safety. Security expenses are not covered by the government, so after much thought, she decided to accept the public’s offer to support her.

Yoon Ji Oh said, “For those of you who support me, I’ll add your name in the book that’s coming out. Also, if you purchase the book, please attach a photo of your receipt and send it to Gayeon Publishing Company, and your name will be added. I thank and admire you so much.”

Jang Ja Yeon
Yoon Ji Oh
How does this article make you feel?