We’re right on the precipice of the finale of “Touch Your Heart,” and thankfully we are not bogged down by pointless filler episodes. Instead, we are treated to a rather interesting story line, as well as stellar acting all around. It’s the perfect way to gear us up for the finale next week, but before we end the whole shebang, let’s revisit the 5 things that delighted us from this week’s episodes.

In a nice turn of events (for us viewers at least, less so for the people involved), the Su Myeong case is brought up again when his distraught mother accuses Jung Rok (Lee Dong Wook) of mistakenly labeling her son a murderer. After Jung Rok discovers new evidence, he begins to question his conclusion on what happened the night Im Yun Hee’s husband was murdered. The reveals of the case are quite interesting, so I won’t give any more away for those who have yet to watch these episodes.

I will say though, I particularly enjoyed that we took time this week to get back into the courtroom, because A) it had felt like the writers hadn’t been giving the “lawyer” concept its proper due, and B) after the let down of the Lee Gang Joon story line, the show needed a thread with more impact. And by revisiting this case, both of these issues are remedied, and we’re actually given an interesting story that for once is not neatly tied up in 20 minutes.

The break up and the make up

I’ll admit I groaned when Jung Rok decided to take the “noble idiocy” route by not only choosing to break up with Yoon Seo (Yoo In Na) “for her own good,” but also feeding her some lame excuses so she would think he’s a jerk. *Insert eye roll.* But after seeing how the separation plays out, I’m actually quite glad the writers had them spend some time apart.

Since the first episode, we’ve more or less seen Jung Rok and Yoon Seo rotating around each other, as well as in accordance with each other. But with this break up, we get to see them operate as separate individuals, which allows us to view them in a different light. This is especially the case with Jung Rok, as his journey this week was something he needed to go through without Yoon Seo’s intervention.

That being said, I’m also glad the break up is kept short, because after Manager Oppa comes clean about the reason behind her break up, Yoon Seo dials her proactiveness to high and keeps popping up in front of Jung Rok, wanting to eat with him. And so, by the end of episode 14, Jung Rok calls her “Oh Jin Shim” again (full circle!), and the couple kisses and makes up! Everyone, say thank you to the writers for not dragging this angsty separation all the way to episode 16! 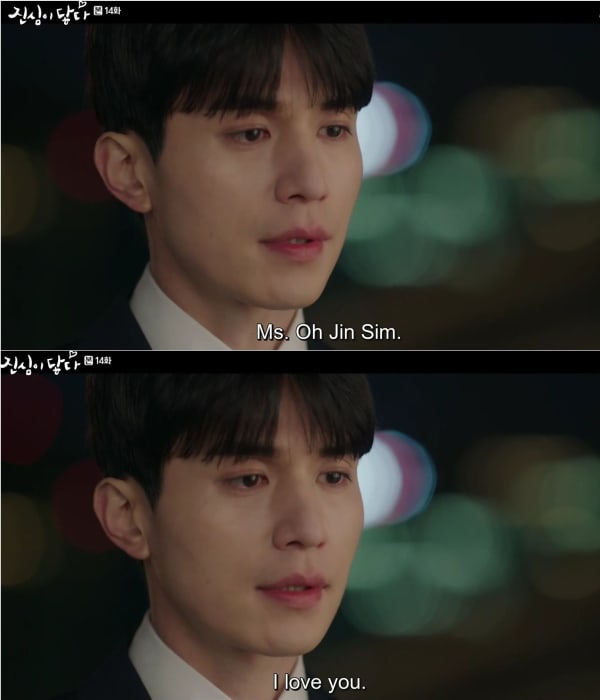 Another highlight of the break up is that we are able to spend more time with Jung Rok, which leads us to…

From the very first episode, “Touch Your Heart” felt very much a one-sided showcase for Yoo In Na. This week, however, Lee Dong Wook finally receives meaty material to sink his teeth into and reminds us of the talent he is. His break up with Yoon Seo, coupled with the guilt he feels over initially “mishandling” the Su Myeong case, drives him to question his ability as an attorney. And just like how Yoon Seo was in the public’s bad graces before, Jung Rok too experiences his share of hateful comments (nice bit of mirroring here).

And in the scene where Jung Rok sits at the bus stop staring forlornly at Yoon Seo’s advertisements, you can see the emotions slowly take over him. The sense of self-doubt, vulnerability, and isolation overwhelms him, and he gradually descends into a heartbreaking cry. It’s a mirror to Yoon Seo’s own breakdown in episode 3, and is done just as brilliantly now as it was then. If you’re not crying along with Jung Rok, especially after that aching silence from the break in the music, then you should probably find someone to touch your heart.

Side note: Lee Dong Wook and Yoo In Na are both such heart-tugging AND beautiful criers, yes?

The break up and the make up (non-romantic category)

Su Myeong’s case drives a wedge between CEO Yeon (Oh Jung Se) and Jung Rok, with Jung Rok insisting on representing Su Myeong and CEO Yeon wanting the law firm to stay as far away from it as possible, as it would be a lose-lose situation for them. In an effort to lessen the blow back on the law firm, Jung Rok even hands in his resignation letter, but his stubbornness only angers CEO Yeon more.

After Se Won intervenes and makes the two talk things through, we see a flashback to when Jung Rok decides to be a whistle blower, which very nearly ends his career. And while CEO Yeon (then also an attorney) thinks Jung Rok is crazy to risk his career, he is also the one who steps in and saves it from actually crumbling. “The best thing I’ve done? Saving you five years ago,” says CEO Yeon. It’s these glimpses into these relationships that give depth to the characters and give new understanding to their present day actions. And as expected of such a strong friendship, the two manage to air things out, and they (as well as the whole law firm) become more dedicated to their task at hand.

Before the finale next week, I just want to make sure that Se Won’s (Lee Sang Woo) praises are sung. He’s not only a breath of fresh air, dropping truth bombs on Jung Rok left and right (“Why’d you break up with her if you were just going to be this depressed?”), but he is also just a great wingman. Like before, he continues to create chances for the Jung Rok-Yoon Seo couple by “causally” mentioning to Yoon Seo that Jung Rok hasn’t been eating well and is nearly on the verge of fainting (he’s not), and also helps Jung Rok and CEO Yeon reconcile. 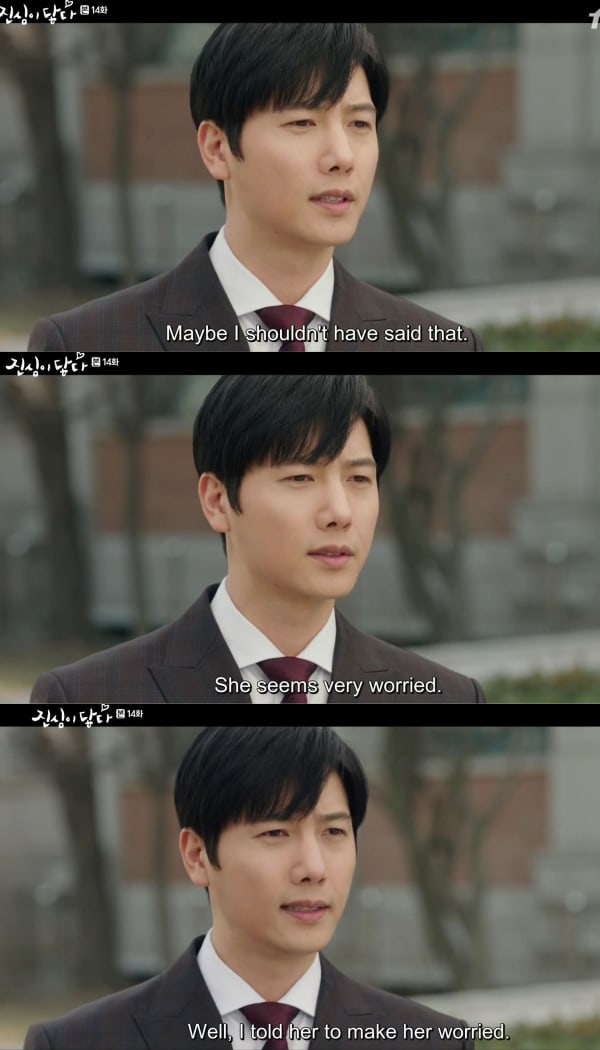 It’s always nice to have someone be the voice of reason when nearly everyone else is being led by their emotions. Seriously, everyone needs to get themselves a Se Won right away!

Were you just as heartbroken as I was when you figured out the reason Jung Rok started taking the bus to work? Also, what are your predictions for our couple going forward? Leave your thoughts and comments below!

Belinda_C enjoys the light fluff as much as the next person, but she is also glad we got some “oomph” to the story too. We can always have a double serving of cheese during the finale! Come discuss this drama and SEVENTEENxShinhwa with her on Twitter!