Shin Ki Hyun responded to some questions surrounding his friendship with Seungri.

On April 4, the actor held an Instagram live broadcast where he denied rumors of his involvement in a chatroom where illegally filmed footage of women was shared amongst celebrities.

SBS’s “8 O’Clock News” previously reported that, similarly to Jung Joon Young’s chatroom, there was another KakaoTalk chatroom in which illegally-filmed videos of women were shared. Members of the chat included a film actor, a model, the son of family-owned conglomerate, and an MD (merchandiser also known as promoter) of Club Arena. The news program named movie stars named “Shin,” “Han,” and a model named “Jung.”

After the report, people suspected Shin Ki Hyun to be the movie actor named “Shin” after netizens found a group photo of him with Seungri, Jung Joon Young, Choi Jong Hoon, and Roy Kim at a coal briquette volunteer event. 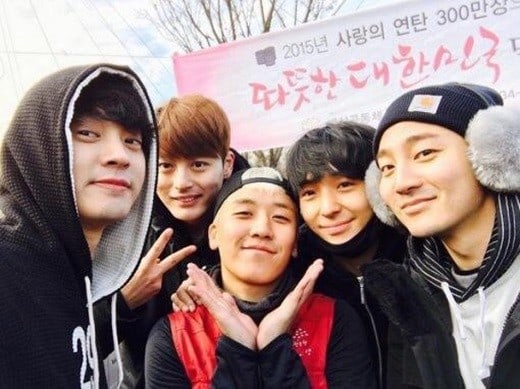 During the broadcast, he said, “I went because I thought it would be nice to do coal briquette volunteering. I didn’t even want to take a photo with them. They’re all popular celebrities. I felt as if I was a nobody. But Seungri asked to take the photo together, so I did. It was my first time seeing Jung Joon Young and Roy Kim. I only said hello to Choi Jong Hoon a couple of times while promoting as Battle.”

About still following Seungri on Instagram, Shin Ki Hyun explained, “People ask why I’m not unfollowing him, but can all of you cut off a close friend when he commits a crime? He’s one of my friends who guided me. I don’t think there’s an answer. It’s right for him to receive punishment if he committed a crime.”

Seungri
Shin Ki Hyun
How does this article make you feel?