This week’s episode of “Running Man” was filled with romance!

On the April 7 broadcast of SBS’s “Running Man,” WJSN (Cosmic Girls)’s Bona, Kim Jae Young, and Jang Hee Jin appeared as guests to join the cast in the final installment of the ongoing “Find the Secret Couple” race.

During the episode, Yoo Jae Suk was the ace “forever alone solo” of the “solo brigade.” Although Kim Jong Kook was eliminated in the middle of the race after being suspected by the “Running Man” members, he was revealed to be a member of the solo brigade as well.

The members and guests were then given a hint about the identities of the secret couple: the man in the secret couple came from a modeling background. After learning this crucial information, all eyes turned towards Lee Kwang Soo and Kim Jae Young. In response, Lee Kwang Soo remarked, “Honestly, I wasn’t a model. I can’t say I was a model. Who in the world came up with this hint?” The actor continued to show his frustration at being suspected by the cast as the episode progressed.

When the soloists opened up a discussion on who the man could be, Lee Kwang Soo reacted with explosive fury as Song Ji Hyo went overboard in defending Kim Jae Young.

It was eventually revealed that Lee Kwang Soo was indeed a member of the solo brigade, which confirmed Kim Jae Young’s role as the man in the secret couple. 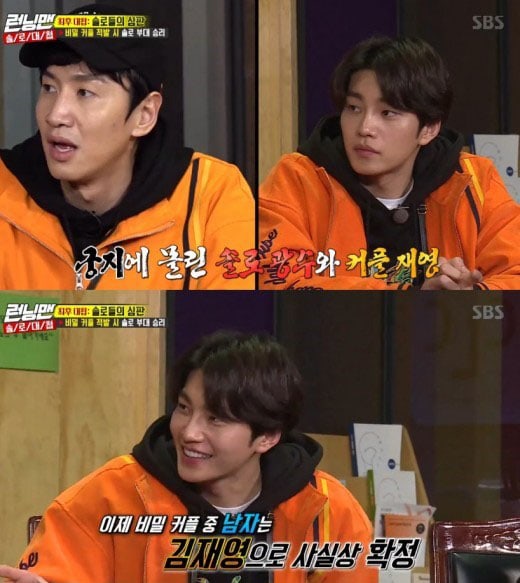 The race continued, but this time to find the other half of the secret couple. The solo brigade was given another hint that the woman was a “Running Man” member, leading them to draw their attention towards Jun So Min and Song Ji Hyo. Jun So Min argued, “I’m going to go crazy. This is so unfair,” while Song Ji Hyo insisted, “It’s really not me. I swear.”

The “Running Man” members eventually chose Song Ji Hyo, but Kim Jae Young’s real partner was in fact Jun So Min. After a long race, the couple was able to take the win. 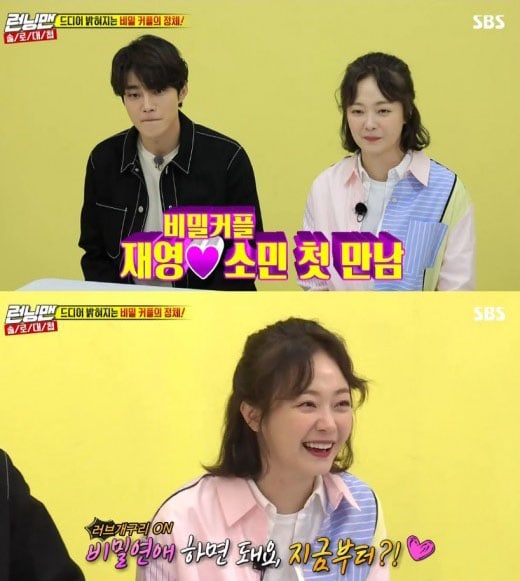 The show then moved onto the next part of the episode, where Jun So Min was given a “Real Variety Dating” mission. Several stars who had acted alongside Jun So Min in various projects gathered on set to go on a romantic date with her.

The first actor to join the segment was Jun So Min’s “Top Star U-Back” co-star Kim Ji Suk, whom she named on a previous episode of “Running Man” as a co-star who made her heart flutter during filming. As they began their date, Jun So Min was unable to meet Kim Ji Suk’s eyes while speaking. Seeing this, he told her, “Can you tell me while making eye contact?” In response, she commented, “It’s because this is the first time something like this has happened that I’m so nervous. I’m nervous, aren’t you?” 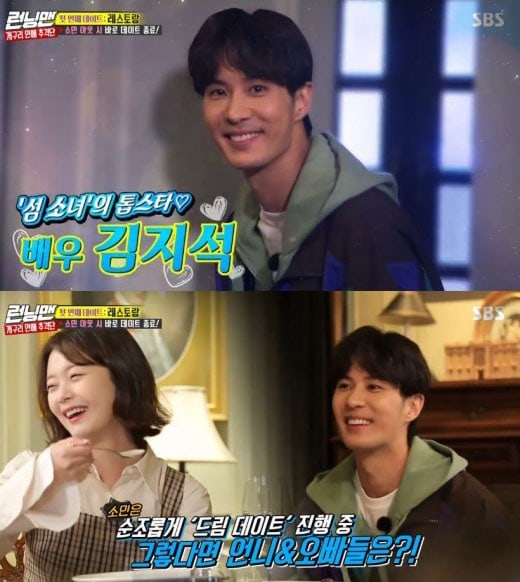 Kim Ji Suk then told the actress, “I’ve seen everything you said about me on air. After watching the broadcast, I thought, ‘Did I really just [spend my time focusing on] filming the drama?'” In response, Jun So Min asked, “Then have you ever felt flustered in real life while shooting the drama with me?” Without hesitating, he replied, “Yes, I have. There have been multiple moments where my heart thumped as well.”

jun so min
Kim Ji Suk
Running Man
How does this article make you feel?