The identity of Eliza on MBC’s “The King of Mask Singer” was revealed to be the main vocalist of a girl group who was also in a project group and has proven herself as a solo artist, actress, variety star, and more.

The episode of “The King of Mask Singer” that aired on April 7 followed contestants as they tried to take the crown from the reigning king. In the second battle of the second round, Bichon and Eliza went head to head with Bichon performing Vibe’s “Are You Crazy?” while Eliza took on Lee Sora’s “To You, Who Does Not Love me”

Eliza won the battle and moved on to the third round, where she competed against the other contestant Chuno. He performed Kang San Ae’s “Said” while she sang Jaurim’s “Twenty five, twenty one.” Eliza won that round as well and moved on to go head to head with the reigning champion Gulliver, who performed Park Hyo Shin’s “Home.”

Gulliver ended up winning the crowd over and received 77 votes to defend his title. Eliza took off her mast to reveal that it was none other than gugudan’s Kim Sejeong. Not only has she been impressing as the main vocalist of gugudan, but Kim Sejeong won people’s hearts as a member of project group I.O.I, and as an actress and variety star. 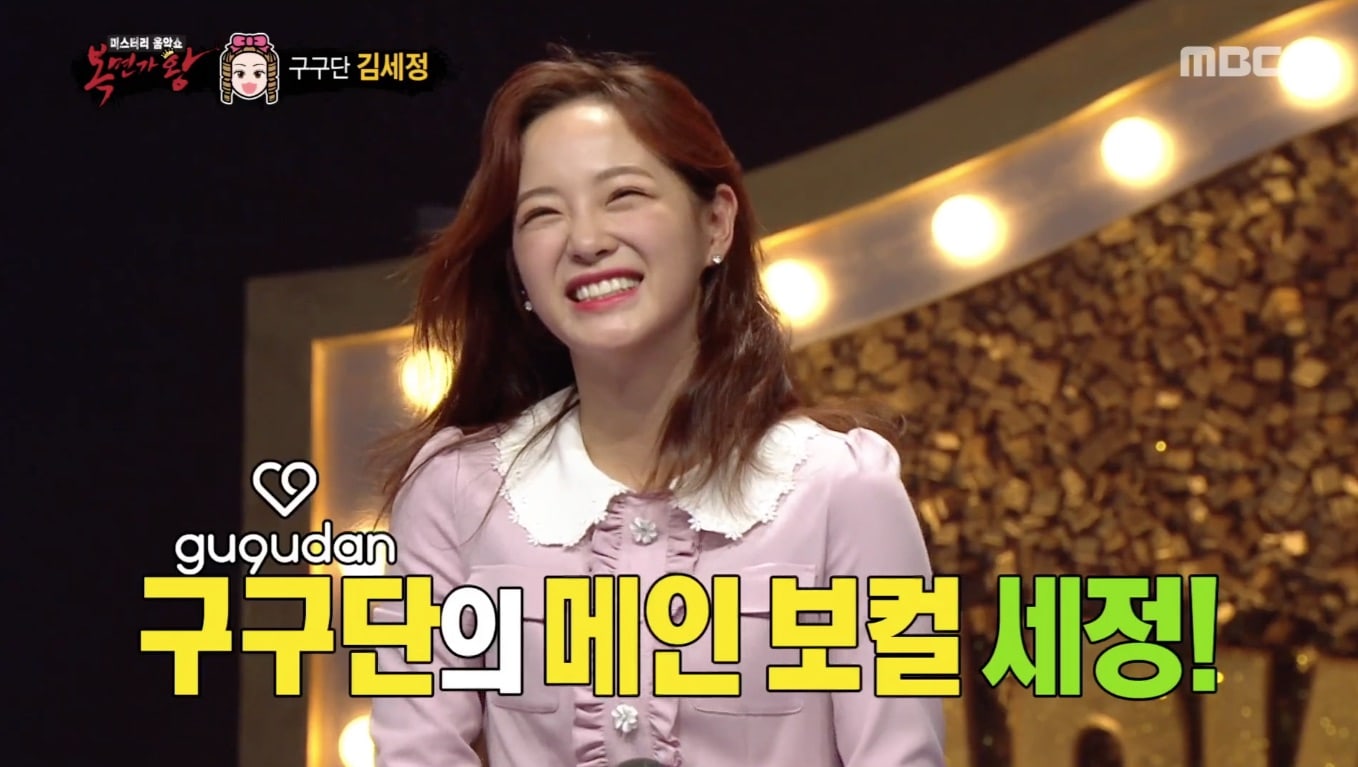 Everyone was shocked to see her as this was her second time on the show. When asked how she felt about getting to the finals when she had been eliminated in the first round in her first appearance, Kim Sejeong said, “I was feeling much more at east this time around. Last time, it felt like I was trying to gain something from the experience, but this time, I just wanted to sing, so seeing everyone watching me sing really moved me.”

Kim Sejeong had previously surprised everyone when she teared up behind her mask in the second round. She accidentally let slip that she was a singer as she had explained that her dream as a singer was to bring someone to tears with her music, and seeing Oh Na Mi cry listening to her made her cry as well. Looking back on that moment, Kim Sejeong confessed, “I actually cried three times on this stage. Everyone heard me sing and had nice things to say to me. I think this will be a great starting point for me to show more performances like this in the future, and that thought brought me to tears.”

After the show, gugudan’s official account shared photos of Kim Sejeong with her mask to celebrate her second appearance on the show.

Catch up with the latest available episode of the show below!

gugudan
Kim Sejeong
The King of Mask Singer
How does this article make you feel?