Uee talked about dating on the April 11 episode of tvN’s “Life Bar.”

During the episode, actress Cha Hwa Yun said Uee is a “fool for love” and revealed that she can’t act cute. To that, Uee responded, “I don’t have a lot of cuteness, but if I have a boyfriend, I act cute to him. I don’t think it’s necessary to act cute to someone who isn’t my boyfriend.”

Then Uee shared how idols used to exchange numbers through a vending machine at SBS’s “Inkigayo.” She said, “If someone gave another person a drink they would put their phone number on the bottom of the can. Or they’d put their number inside the vending machine.” Heechul clarified, “Where the drinks come out.” Heechul asked if Uee ever got someone’s number that way, and she said, “I really expected it when I was a singer. I never got a single one.” 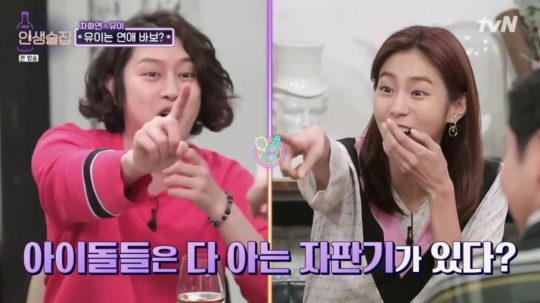 Uee will also be appearing on “Ask Me Anything” with Choi Soo Jong on April 13. Check out the preview here. Uee, Cha Hwa Yun, and Choi Soo Jung all appeared on “My Only One,” which ended recently.

Start watching “My Only One” if you haven’t already:

Uee
Life Bar
How does this article make you feel?